Things are shaping up great for another week of summertime fishing along the Outer Banks from Carova to Ocracoke. A wide variety of species are biting, so get out and wet a line today!

“The water temperature dropped, then went back up and the fish came right back!”

She gets plenty of fishing news while working with her husband Derek at OBX Bait and Tackle in Corolla near Food Lion.

They’ve had a few first timers lately and one of them, Brandon Farley from Maryland, did great fishing for spot in Pine Island. 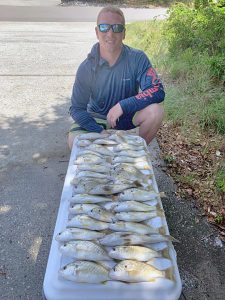 “It was his first or second time ever!” Cyndy said. “Another first timer caught a 33-inch red drum!

“He had a sand flea on a hook, caught sea mullet and then the 33-inch drum bite that – you could see the mullet in its mouth!” she said. “He was a very, very happy man with that!”

Anglers have also had luck hurling metals way out in surf to catch bluefish and Spanish mackerel, Cyndy noted.

“We’re going through the casting lures and Stingsilvers like crazy!” she reported. “Blues and Spanish – it’s on!”

At the ocean piers from Kitty Hawk to south Nags Head, action has been good, with plenty of blues and Spanish mackerel along with small flounder and spot. 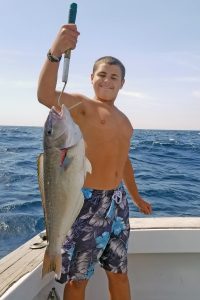 “It’s kinda medium, not real slow, not real fast either,” he said. “A few people are catching, but not everybody.”

Column: Have it my way