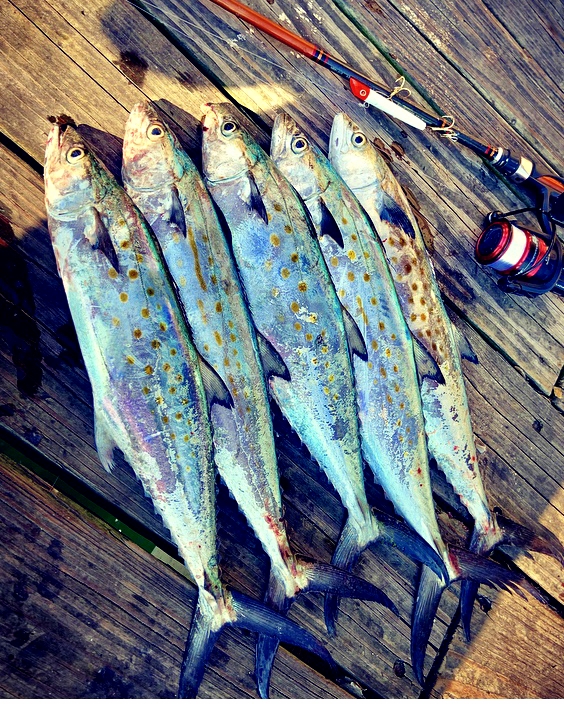 These Spanish mackerel were caught on a Got-Cha plug over the weekend by angler Baylen Bauer of Maysville, Ky. He was fishing off the end of Jennette’s Pier in Nags Head. Courtesy photo

Monday fishing was slow on the ocean piers from Kitty Hawk to Nags Head. At Jennette’s Pier, Larry Haley reported that just a few fish had been caught.

“Sunday, fishing was off and on all day,” Haley said. “They caught a rudderfish and a pompano that weighed two pounds.”

By the end of the day, they had nice variety of species; blues, Spanish, black drum, spadefish, triggerfish, rudderfish, sheepshead, mullet and flounder.

“It’s hot but we’re catching a few small fish,” he said, “we got two cobias yesterday and blues and Spanish. They come in early morning and late evening.”

Sary explained that one day not too long ago they had a run of nice flounder.

“Dog gone, one day everyone was catching keeper flounder but that ended too,” he said. “We’re getting a few spot too.”

Jerry said his name caused him some aggravation back in his youth.

“Jerry Sary, I had a tough time through high school,” he said. “I had three boys and I made sure their names didn’t rhyme.” 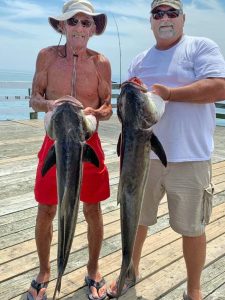 Ron Erb, left, and Tony Chirico hold cobias they caught at Nags Head Pier over the weekend. They were pitching bucktails made by Lead Bottom Bait Co. Courtesy photo

Up north even further, Christian Robiero at Avalon Pier said they’ve been doing good on fishing although he said anglers lost a couple of cobia recently. Otherwise, they’re getting blues, Spanish, triggerfish and pompano.

Later in the day, however, there was an online post of a triple hook up of cobia.

“One blowtoad and two flounder, that’s it!” she said. “The largest was twelve inches.”

“You know, it’s funny, the water is so clear up can see them down there,” Allen said. “they just won’t bite anything.” 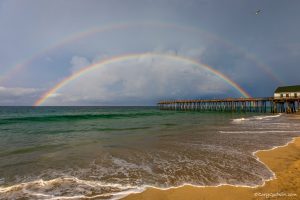