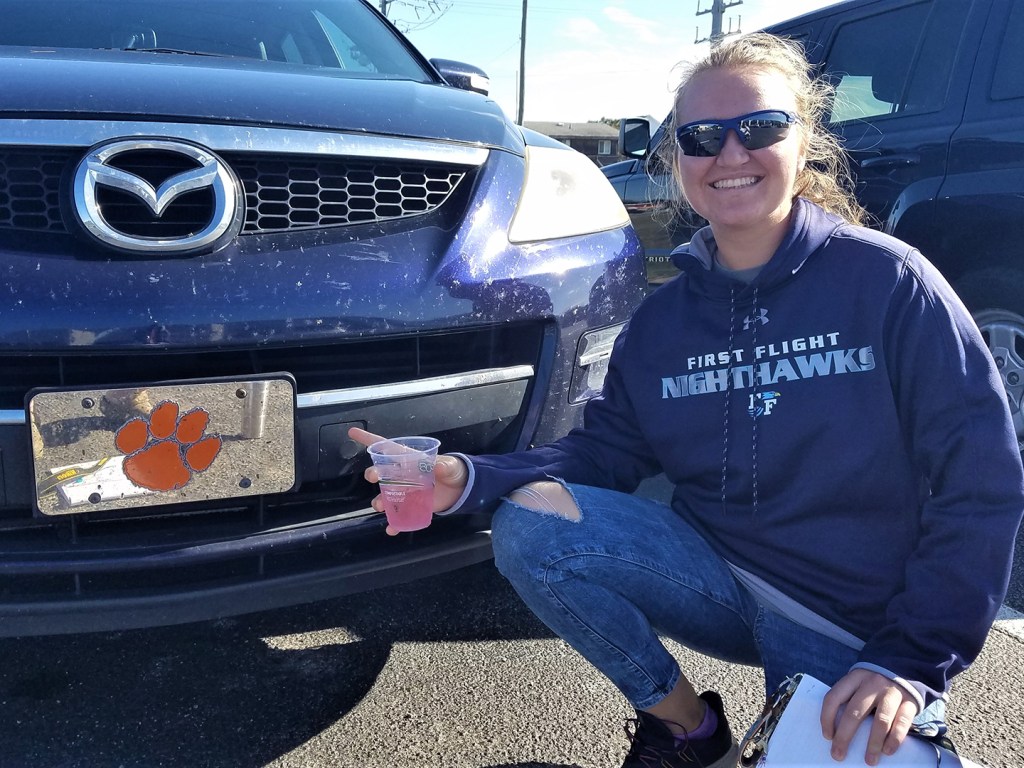 Katherine Schuster points to her Clemson tag on her Mazda. She recently won her third state golf championship in a row. She's given a verbal commitment to Clemson University. Daryl Law photo

With her third straight state championship victory in the bag, First Flight junior golfer Katherine Schuster has positioned herself perfectly for a bright future in her sport.

Two years ago, the Kill Devil Hills resident also won a Drive, Chip & Putt competition at Augusta (Ga.) National Golf Club, home of The Masters, a major on the PGA Tour. In the same event at age 10, she came in third and it “killed” her, she said. 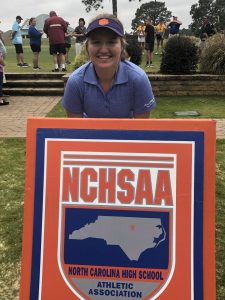 This focused student-athlete has plans to attend Clemson (S.C.) University after her senior year and graduation in spring of 2021. Perhaps she’ll compete for one more 1A – 2A state championship next fall if all goes well.

Until then, Schuster says she plans to compete in more tournaments, practice and play rounds at her home course, The Point Golf Club in Powell’s Point, Currituck. Her parents, Rikki and Dave Schuster, have supported her every way possible and she’s extremely thankful.

Just a week or so after she swept the field in the state championship at Longleaf Golf & Family Club in Southern Pines Oct. 28-29, she talked about the experience while enjoying an iced tea at the Front Porch in Kill Devil Hills.

So how did it feel to claim the title again?

She admitted that she got off to a shaky start on Day 1, but Katherine recovered nicely on Day 2, when her entourage grew and she set her mind to winning. 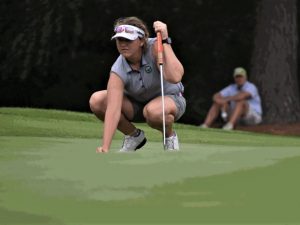 Katherine Schuster lines up a putt while playing a round of golf recently. Her dad Dave is nestled against a tree in the background. He likes to keep his distance during events. Courtesy Wilson Golf Club

“On hole one, day one – things didn’t go as planned,” Katherine said. “I doubled.”

“I saw it (the ball) in my mind’s eye in the center of the fairway,” she continued. “but I pulled it left into the woods – not what I had planned.

“Just pulled it really badly,” Katherine said. “It took the whole round to recover” from the double bogey.

“I wasn’t very happy with it, but I had to smile,” Katherine added. “Sometimes you don’t play the way you want, as planned, it teaches you a lot.”

With her reputation as a champion golfer, Katherine said other players are sometimes uneasy playing against her. It’s resulted in her striving to stand tall in all situations, appreciating the moment and attempting to set a good example as a role model, she said.

Katherine said she tries to be open and friendly while maintaining her focus so she can play her best. Finding that happy medium is important to her game, important to winning. 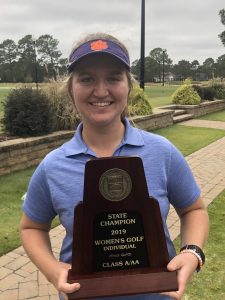 She takes a break for a minute and smiles because a cheery Frank Sinatra song is filling in the coffee shop with his voice. Katherine admits she also likes Dean Martin, Louis Armstrong and similar artists.

“When I first got here, they were playing Sway,” she said. “I could tell you every word. I like it, but it’s not my go to.”

“King of the Road sung by Dean Martin – that’s my go to,” Katherine added. “I like the way he sings it.”

After a pause, she’s back on the course, re-living the moment.

“Day two was much better,” Katherine said. “Mr. (Tim) Albert was there and Mr. (Chuck) Lansing walked with me and talked with me offering a little coaching.” She has huge respect for each man, one her former principal, the latter her current one.

Of course, her mom was there for support, too, along with with “Mrs. Albert, Bubbie and Noah Doughtie, who was there the last two years to support me – he was on the [First Flight] men’s team.” Unfortunately, her dad Dave stayed home because his landscaping business demanded his attention on the heels of Hurricane Dorian.

“Dad, he’s the greatest support system and he encourages me,” Katherine said. She explained he typically maintains a low profile on the course when she’s playing and the family jokes that’s he’s like a stealthy operative on a military mission. But he’s been there from the beginning guiding her all the way. 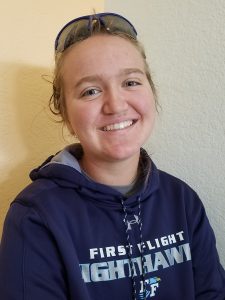 Another important figure in her life is Cory Schneider, her golf coach and mentor at The Point. He also offers friendship and advice, Katherine noted.

“He’s taken me under his wing and shown me how to be the best I can be and I really appreciate it,” she noted.

Katherine said Schneider’s helping her with life outside of golf too. Off the course, we need to enjoy ourselves, she said.

But when it’s time to tee it up, the focus comes back and it’s laser sharp.

“When we cross the white line, we give it all we’ve got!” Katherine said about walking onto a course for a round. Crossing the imaginary white line means entering the realm of competition and elevating the concentration needed for each round.

Her dad Dave helps with agility training and workouts. Katherine is super close to her parents.

So what’s next for this golf phenom?

“I’m learning to fly at the Dare County Airport with Jenny at OBX Airplanes,” Katherine said. “I’m almost ready to fly solo after we work more on emergency procedures.”

“It’s pretty cool to fly over the Outer Banks!” she added.

Do you have plans to fly yourself to golf tournaments some day?