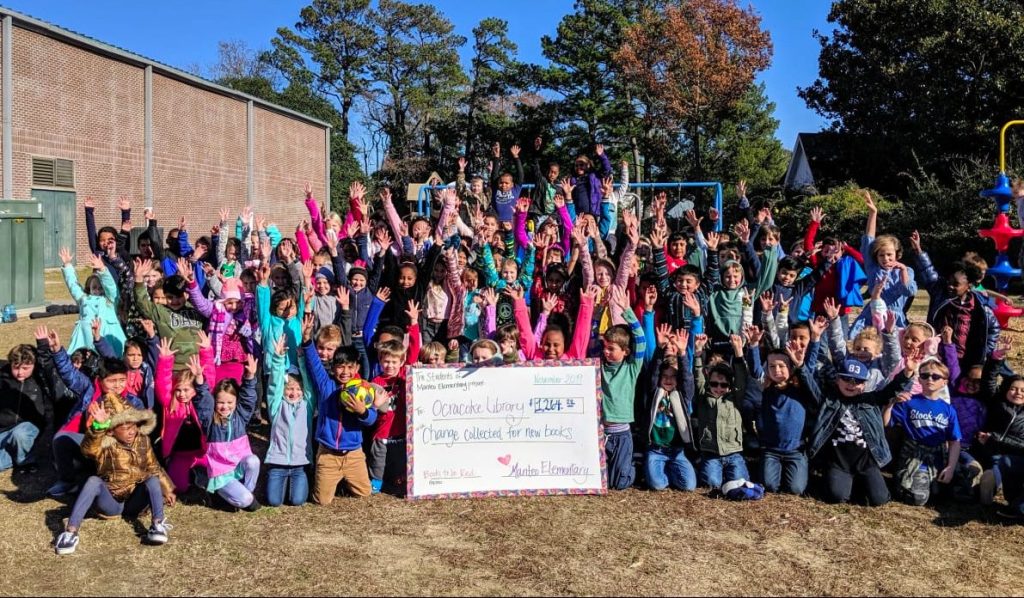 Students at Manteo Elementary School have started a tradition of reaching out to communities affected by natural disasters.

In 2016, students sent homemade cards, encouraging notes and colorful bookmarks to a Baton Rouge, Louisiana school that was closed for an extended time after extensive flooding.

The following year, students were inspired by the schoolwide read of Fenway & Hattie by Victoria Coe to support animal shelters that housed and transported animals affected by Hurricanes Harvey and Irma. Students collected nearly $1,000 in spare change to send to shelters based in Houston and Pasco Co, Florida.

In 2018, Hurricane Florence turned these compassion campaigns a little closer to home. Students collected new or like-new books to send to a school in Brunswick County and participated in a supply drive that benefited New Bern schools, coordinated by the Junior National Honor Society at Manteo Middle School. 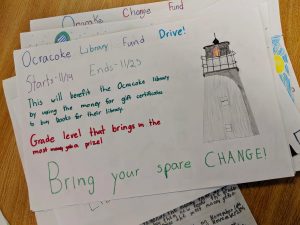 This school year, students chose to help the Ocracoke Library, which sustained damage after Hurricane Dorian in September. During the local book fair, students and families contributed spare change to grade-level buckets to inspire a little competitive giving. The campaign was brainstormed and promoted by students in Mrs. Corbett’s AIG classes.

Donations came in by the handful, pocketful and sometimes jarful. After eight days of collecting, a total of $1,246.22 was raised for the Ocracoke Library. Per the library’s Facebook request, the donation will be given in the form of a gift certificate to the local independent bookstore, Books to be Red. Along with the gift certificate, a copy of Ryan Higgins’ picture book, Bruce’s Big Storm will be sent to Ocracoke, signed by every MES student.

MES’s second grade donated the highest amount, totaling $446. Donations are being collected for this campaign through Downtown Books in Manteo throughout December.