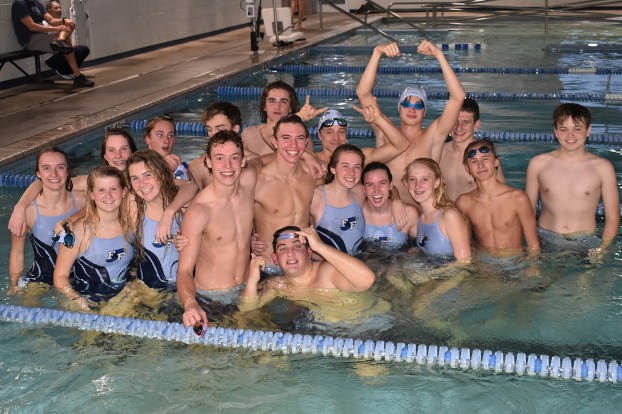 The First Flight High School swim team gathered together during a short intermission in the meet. Danielle Puleo photo

First Flight High School and Manteo High School competed in a dual swim meet on Wednesday, Dec. 11. Pasquotank High School was unable to attend the meet due to travel issues.

FFHS finished first overall for both the men’s and women’s swim teams. The women scored 137 points against the MHS women, who scored 72. The Nighthawk men won 131 to 66.

The Nighthawks won five out of the six relays, which led them straight to a convincing victory. For the men’s team, Payton Savage placed first in both the 200 meter freestyle and 400 meter freestyle, scoring 12 points for his team. Brodie Nash also brought in 12 points after placing first in 100 meter butterfly and 100 meter backstroke.

For the Nighthawk women, Ava O’Neil swam first to the finish in both the 200 meter IM and 100 meter backstroke. Emmy Trivette placed first in the 100 meter breaststroke and second in the 100 meter butterfly. Collectively, O’Neil and Trivette scored 22 points for First Flight. 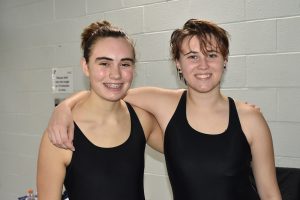 Sophie Benkusky placed first in the 100 meter butterfly and 400 meter freestyle for the MHS women’s team. She gained 12 points for her team. 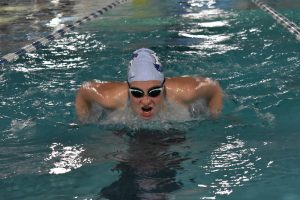 The following meet was held on Friday, Dec. 13 at the Elizabeth City YMCA.

In the last quarter of Tuesday’s basketball game, the Cape Hatteras boys varsity team came from a 10-point deficit to... read more