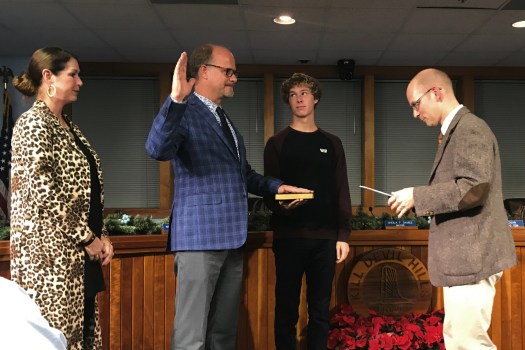 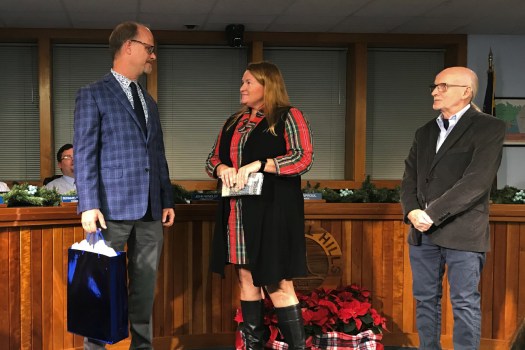 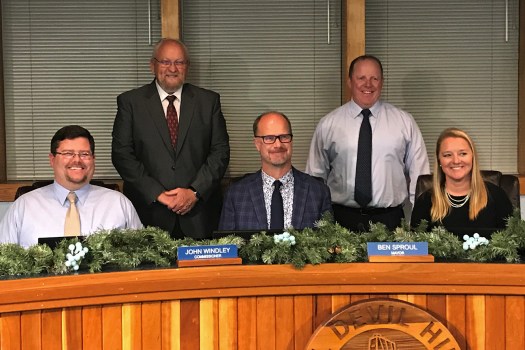 Davies had served as mayor of KDH for eight years. During her term, she witnessed many changes. After she recounted the years of work and the projects the town was able to accomplish together, she said, “I share this list not in the spirit of self-accolade, but in the vain of highlighting what can be accomplished when you have talented, caring and dedicated people working together.”

Commissioner Terry Gray shared that he had never met anyone that let the board input their thoughts and opinions as much as Davies did. “I really have a lot of respect for you,” he said. Jones followed Gray’s comments up by saying: “I second that motion,” to which everyone laughed.

“I just want to thank you, Mayor Davies, for how efficiently and productively you conducted our meetings,” commissioner John Windley added. Hogan said, “I’m so privileged to have sat beside great leaders.”

With that, the newly elected mayor and commissioners – Ben Sproul, Ivy Ingram and Bernard “BJ” McAvoy – were sworn in by deputy clerk Michael O’Dell.

After a brief reception to welcome the new mayor and commissioners, Ingram was nominated by Gray to become mayor pro tem beside Mayor Sproul. All were in favor of this motion.

Ingram, Windley and McAvoy were nominated to serve on the Tourism Board for a two-year term, with Ingram being the first choice.

Once these candidates were selected, Windley presented a resolution to renew their continued commitment to the opposition of offshore oil drilling and exploration. “This was a precedent we set two years ago, so I would like one of our very first actions to be to renew this commitment,” Windley said. “Excellent idea,” Sproul said. After no further discussion, the motion was adopted unanimously.

Sproul then made note of an upcoming meeting regarding large single-family dwellings/event homes. On Jan. 22, the board will hold a joint work session with the KDH Planning Board to discuss regulatory changes the town could consider for this type of development. This discussion will take place during a regular Board of Commissioners meeting.

McAvoy asked staff to present information on how the situation in KDH compares and differs from the surrounding towns regarding large dwellings. He also asked if clarification on nonconformity. For example, in the case of parking regulations affecting larger homes.

Windley wanted more information on if and how other towns have brought forth safety regulations on these larger dwellings: “Can we research and see if any other towns have found workable ways to incentivize extra safety features beyond those required for state building code?”

Staff agreed to look into these questions and present their findings at the meeting in January.

Lastly, the board discussed a date for their annual appreciation reception for appointed board and committee members. Last year, this reception was held at Captain George’s Restaurant in late February. The board chose to hold the next reception on March 4, 2020.

Before ending the meeting, Sproul started his term by thanking Davies for getting him involved with community: “The shoes to fill – big. Sheila, thanks for getting me involved and pushing me in this direction. I hope that I can do the job justice and hold a candle to all that you have accomplished.”

The next Board of Commissioners meeting will be held on Monday, Jan. 13 at 6 p.m. in the Meeting Room of Town Hall in Kill Devil Hills.