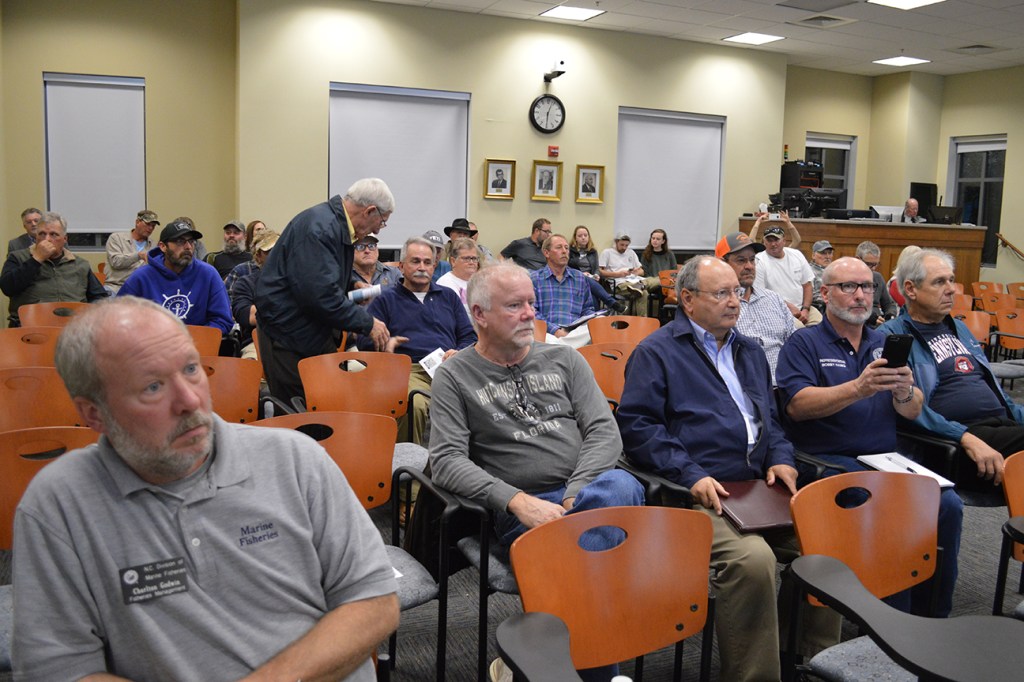 The state’s Marine Fisheries Commission is in the midst of preparing a third amendment to the Southern Flounder Fishery Management Plan.

The result of the 2019 stock assessment, which has been peer reviewed and pronounced certified, is that southern flounder is overfished and overfishing is occurring.

The meeting introduced a scoping process, an initial phase of amendment development and something new to the state’s division of marine fisheries.

The staff was looking for broad management strategies.

Another measure is to create no-take inlet corridors or other closed areas for fish migrating to the ocean to spawn. The tactic is included in the state’s blue crab fishery plan.

Dare commissioner Steve House led off commenters. He was one of 10 people who signed up to speak and delivered remarks. House asked that the division “re-evaluate how stock assessments are done.” He agreed with the split in species of flounder or species-specific management.

Wally Overman, vice chairman of the Dare Board of Commissioners, spoke during the question period. He asked about extending a season, as requested in a resolution by Dare’s commissioners passed on Sept. 16. This year, flounder fishermen had an abbreviated season and Hurricane Dorian curtailed preparation.

Kathy Rawls, fisheries management section chief for the state’s marine fisheries said that the division’s director did not have the authority to shift seasons this year. In 2020, the director has the authority, she said.

Wayne Twiford, who fishes in Currituck Sound, said “I don’t think your data is good.”

Watson Stewart reported plenty of fish in the Currituck Sound. “This ain’t right.”

Alana Harrison said she would love to see an economic impact statement. “It’s hard to make a living in state waters.”

During the question period, Mary Ellon Ballance raised the issue of other states in the southern flounder range. Ballance said “have the other states on board before we punish these guys.”

An information sheet about Amendment 2 produced by the division shows that “North Carolina’s commercial and recreational southern flounder removals are higher than all other states combined. Therefore, it’s likely that any management strategy implemented by North Carolina will have a positive impact on the sustainability of the southern flounder fishery, regardless of any action, or inaction, by other states.”

Dare commissioner Rob Ross acknowledged the passionate and informed comments. He asked if the conclusion could be overstated, commenting the assessment may not be accurate.

Rawls responded “I do believe in the results of the southern flounder assessment.”

She said “we are concerned about this fishery. This fishery has at times been mismanaged. I do believe the assessment.”

Michael S. Loeffler is the southern flounder staff leader. He commented that a large step forward was made with other states’ data. “We need to fill data gaps . . . I believe in the data.”

Ross called the situation “a large fact gap.” He queried “How could they all be so wrong?”

Questioners did raise issues with Amendment 2.

Amendment 2 to the southern Flounder Fishery Management Plan was adopted Aug. 23. That amendment required that Amendment 3 be developed for long-term management measures for the fishery.

The meeting in Manteo was the last of three meetings along the North Carolina coast. The public comment period ended the next day.