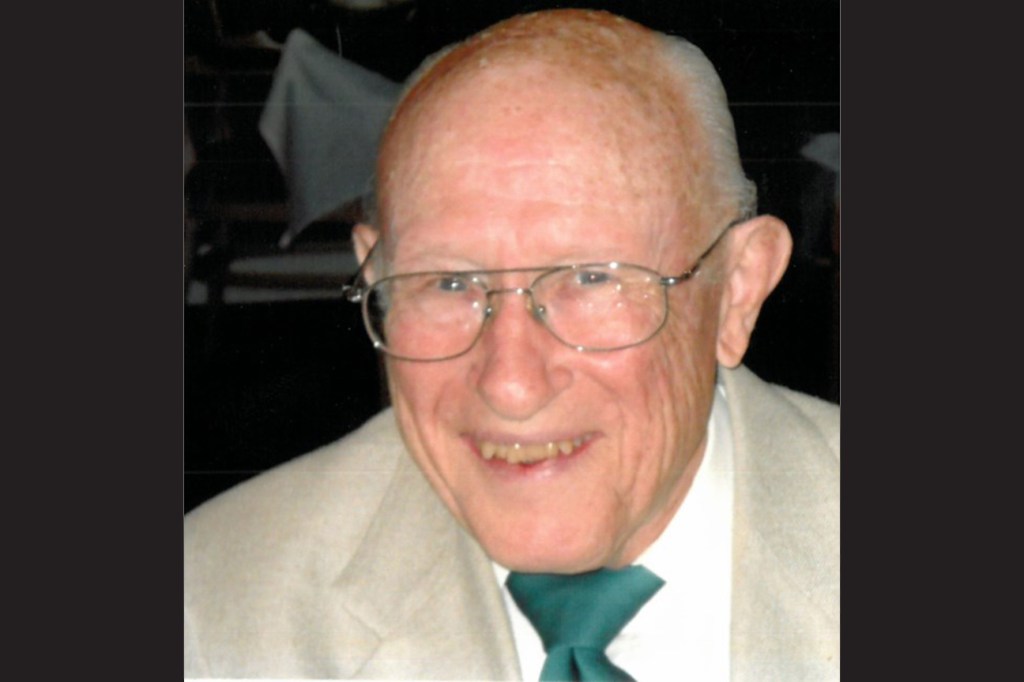 Henry “Gus” Augustus Geidel Jr. finished the final chapter of his life peacefully on Saturday, January 4, 2020, reuniting in Heaven with his wife and love of his life, Elizabeth “Liz” Wait Geidel.

Gus grew up in Glen Cove, NY, and attended Cornell University from 1943-1946, with his dedicated service to the Navy paving his way to a graduate-level dental program at the University of Pennsylvania. Following his degree in 1950, he and Liz (whom he married in 1947) moved to Lowville, NY, where he grew to become the community’s much-loved dentist. Spending several years away from the community for additional military service at Camp Lejeune Marine Base in North Carolina as a Lieutenant did not dampen their enthusiasm for his return when he and his growing family moved back to Lowville permanently in 1956. There, amid the lush Adirondacks where he loved to hunt in the fall and ride snowmobiles in the winter, he and Liz raised their children.

Not only a proud veteran, enthusiastic outdoorsman, and dedicated family man, Gus was an integral part of his community, wearing not only his dentist’s coat but the hats and pins of an American Legion Commander, Kawanis Club president, Elk’s Club member, and masonic lodge Master Mason. He was also an active member of the Episcopal Church, serving on the vestry of his parish in Lowville and remaining involved in the Church throughout the rest of his life.

Gus was “Dad” to his four children and their spouses — Chris and Mary Geidel, Gwendelyn Geidel and Frank Caruccio (d. 2009), Henry III and Becky Geidel, and Gail and Lew Costantini — and loved fiercely as “Pa” to his eight grandchildren and their spouses — Ben and Danielle Geidel, Gus and Heather Geidel, Lisa and Russ Schuchman, Scott and Katie Geidel, Christina Caruccio and Dan Scannell, Frank and Emily Caruccio, Melissa and Welington Maluf, and Catherine and James Best. Pa doted on and delighted in his ten great-grandchildren — Nathan, Jack, and Grace Geidel; Holden and Willa Geidel; Nora and Emily Geidel; Charlotte and Sophia Best; and Felicity Maluf. Pa showed his love not only with stories, hugs, and jokes, but with beautifully worked tables and candlesticks that became treasured wedding gifts over the years, a testament to his skill as a brilliant woodworker and expert craftsman.

Paramount in Gus’s life was his adoration of his wife, Liz. As high-school sweethearts they found love early, and over the course of their lives and eventual sixty-six years of marriage they were inseparable. Finding any excuse to dance to their beloved Big Band music, or to host a cocktail party for their neighbors and friends, Gus and Liz created true joy in their lives. Active travelers and fond of a good drive, Gus and Liz visited all fifty states over the course of their adventures and settled on Manteo, NC, nestled in the beaches of the Outer Banks, to spend their snow-free final years, moving there in 1996. True to their wedding vows, in sickness and in health, Gus also cared for Liz after her stroke near the end of her life, eventually moving them to Columbia, SC, where they became beloved members of the Wildewood Downs retirement community. They remained in touch with friends and family across the country, including Liz’s sisters-in-law, Nancy Wait and Carol Wait, and their surviving cousins, Rick Comstock and Janet Green. Although Gus said goodbye to Liz on December 31, 2013, the stories he told of her kept her close in spirit.

Gus’s sprawling and ever-growing family misses him dearly, his legacy not defined by the things he did but by the family ties he forged in the furnace of his heart. We love you, Pa. Rest well.

Private service being held on Wednesday at Wildewood Downs. A Memorial Celebration for family and friends will be held at the end of March, 2020.

In lieu of flowers, the family asks that any contributions be made to Gus’s preferred charity, Operation Smile, or to your charity of choice.