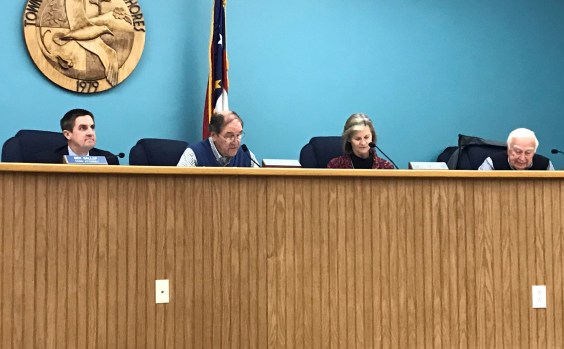 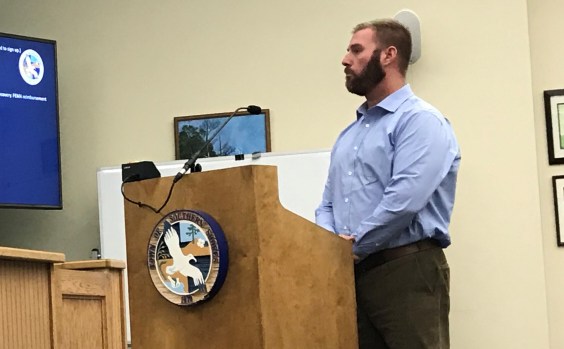 Project manager Greg Evans updates the council on the volunteer fire department facility project that is underway and planned to be completed in May 2020. Danielle Puleo photo 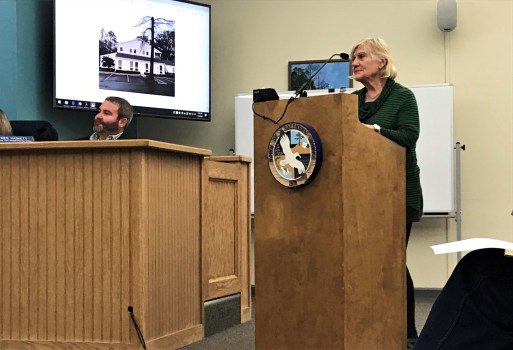 Lilias Morrison with the Exploratory Committee of Southern Shores, asking for authorization to present a new library branch to the Dare county commissioners. Danielle Puleo photo

To start off the meeting, Mayor Tom Bennett addressed a budget amendment of $475,000 to cover the expenses associated with Hurricane Dorian, mainly dealing with debris cleanup. Bonnie Swain, finance and human resources director, said they have been working closely with a FEMA representative and reimbursement is anticipated.

Planning director Wes Haskett then updated the council on recent capital improvement projects. Sea Oats Trail surveying is underway and plan drafting for Hillcrest Drive has begun. For E. Dogwood Trail, the pre-bid meeting is on Jan. 14; bidding has been scheduled for Jan. 23. The project has an estimated completion date of May 1.

Dewberry Lane street improvement plans have been finalized and a meeting with adjacent property owners to review those plans will be scheduled in the next few weeks. Haskett added that forming and pouring has begun for the S. Dogwood Trail walking path.

Fire Chief Ed Limbacher and project manager Greg Evans discussed the progress of the volunteer fire department facilities. “We’re pushing forward,” Evans said. There have been some engineering problems having to do with the architecture that needed to be worked out. Steel was the main issue – or “the lack there of,” Evans commented. Evans said he sees the construction to be fully completely by the middle to end of May 2020.

As for the new library branch, Mike Fletcher and Lilias Morrison with the Exploratory Committee presented results and the location they found for a library in Southern Shores.

After surveying residents of Southern Shores and the neighboring towns, Fletcher reported that about 80% of respondents expressed interest in a new library. This was mainly due to convenience. “It would fill the void between Corolla and KDH,” Fletcher said.

After searching for a location, Fletcher said the committee found 6 Juniper Trail in Southern Shores to be an ideal spot. Formerly law offices, the 2000 sq. ft. property is owned by TowneBank. They are willing to lease the building for “$1 a year for ten years,” Fletcher said.

The building is presently zoned for office space and would need to be modified. The engineering plan has already been developed and approved by TowneBank and the cost would be the responsibility of Dare County.

Morrison asked that the council support this endeavor and welcome a library branch in Southern Shores, along with authorizing the committee to present this project to the county.

Jim Conners, board member and advisory member on the Exploratory Committee, made a motion to this effect, authorizing presentation to Dare County commissioners upon review and approval from the towns of Kitty Hawk and Duck. All were in favor.

After Fletcher and Morrison took a seat, Joshua Smaltz approached the podium with a follow-up from Bay Disposal. Smaltz proposed a new solution to the requested amended contract: a waste energy plant in Virginia. Bay Disposal is in the process of amending their permit to use this as an alternate facility. “Hopefully by the end of the week, no later, will we have that approval,” Smaltz said.

The cost for using this alternate facility would be $65 per ton, about half the cost that was discussed at the last meeting. The cost per home would be $6.59.

After hearing Smaltz’s alternate solution, the council and Smaltz were in agreement to postpone contract agreement until the final decision is made from the state. If the contract is approved, a budget amendment of $16,000 would be needed.

The last few agenda items included board appointments. There were three open seats available on the Planning Board: one regular and two alternates. After little discussion from the council, Tony DiBernardo was appointed to the regular member seat on the planning board. Linda Burek, nominated by Elizabeth Morey, and Robert McClendon, nominated by Matt Neal, joined the planning board as alternates.

The next Town Council meeting is scheduled for 5:30 p.m. on Tuesday, Feb. 4. On Jan. 21 at 9 a.m., there will be a workshop meeting to discuss beach re-nourishment.