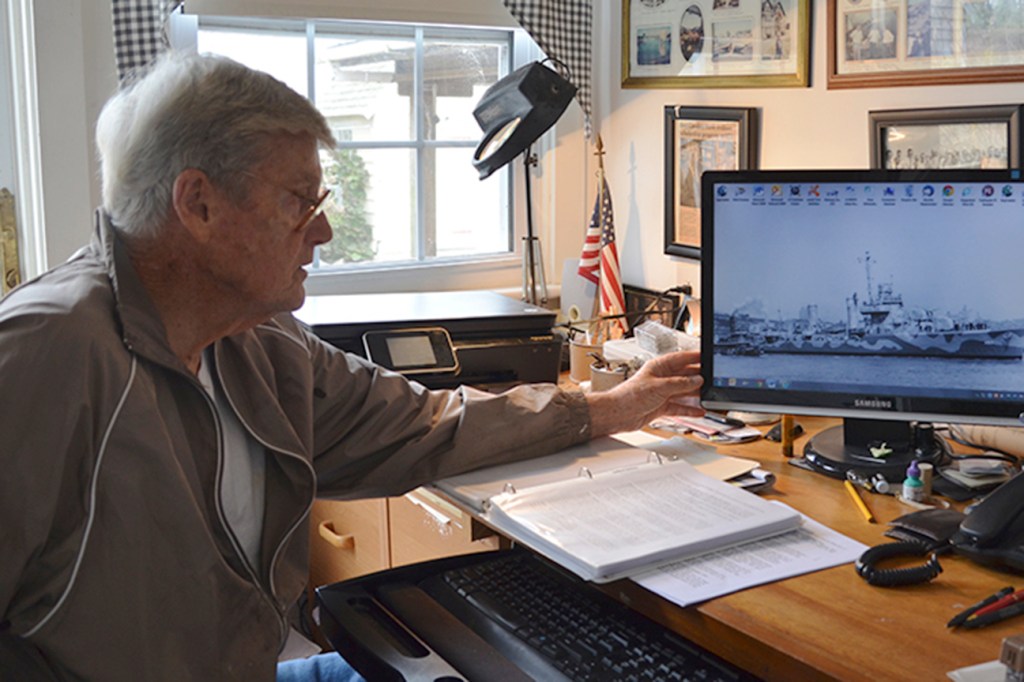 The stories of 490 Hyde County World War II veterans will now be preserved for future generations at the Outer Banks History Center in Manteo, thanks two decades of effort on the part of one Hyde County man.

When the Japanese Navy bombed Pearl Harbor on Dec. 7, 1941, E.R. Clarke Sr. was serving as a U.S. Navy recruiter in Miami. Immediately called to duty, the only delay was having his wife change the buttons on his uniform, which he had been wearing to church on Sundays.

What followed was a tour of duty in the Pacific Theatre of World War II, which he carefully documented in a service log. Decades later, Engelhard resident E.R. Clarke Jr., better known as Roy Clarke, set out to tell the story of his father’s service.

“He started after he retired from the East Carolina Bank,” said Anna Clark, Roy Clarke’s wife. “He started working on his dad’s story and as he worked on that, he would find other things on the internet about other people. It evolved into about 490 individual veterans from Hyde County.”

Consisting of discharge papers, courthouse records and interviews with living veterans, Anna Clarke said it was almost endless what he could find. The end goal was to compile it all in a book called “They Came From Hyde.”

Last summer, the Clarkes donated the collection to the Outer Banks History Center, which began a long process of archival work at the center. Thanks to those efforts, visitors to the center can now search an index online to see what materials the center has on hand regarding a particular veteran.

“He put together biographies on all of these veterans, he collected newspaper clippings, made copies of enlistment papers and family papers related to several of them,” said Samantha Crisp, director of the OBHC. “. . . It’s all organized alphabetically by the name of the veteran, so it’s really easy to look up if you’re related to one of these people or researching one of these soldiers.”

“It was a mountain of information he had collected, not just on individuals, but on World War II battles, the ships and the planes that were used,” McQueen said. “You kind of get a feel for the whole scope of things, which I’m sure is what he was trying to portray. It was quite an honor for me to have the task.”

For McQueen and Clarke alike, compiling and preserving these stories has been a work of passion. Thanks to their efforts, and the untold hours of labor, the service and sacrifice of those sailors, soldiers and airmen will be kept forever.

“We, like every other county — Beaufort County, Washington County — everybody’s got their share of World War II veterans,” Roy Clarke said. “There ought to be some preservation out there of some description. I was hoping maybe somebody in Beaufort County would pick up on it and try to put together the men’s names and where they served during World War II. It’s a monumental job — very complicated. I enjoyed doing it.”

To view the finding aid for the Roy Clark Papers collection, visit axaem.archives.ncdcr.gov/findingaids/PC_5288_Roy_Clarke_Papers.html. Materials can be viewed by visiting the Outer Banks History Center at 1 Festival Park in Manteo. For more information on the center, visit archives.ncdcr.gov/researchers/outer-banks-history-center.

Preparations being made for 2020 Outer Banks Taste of The Beach