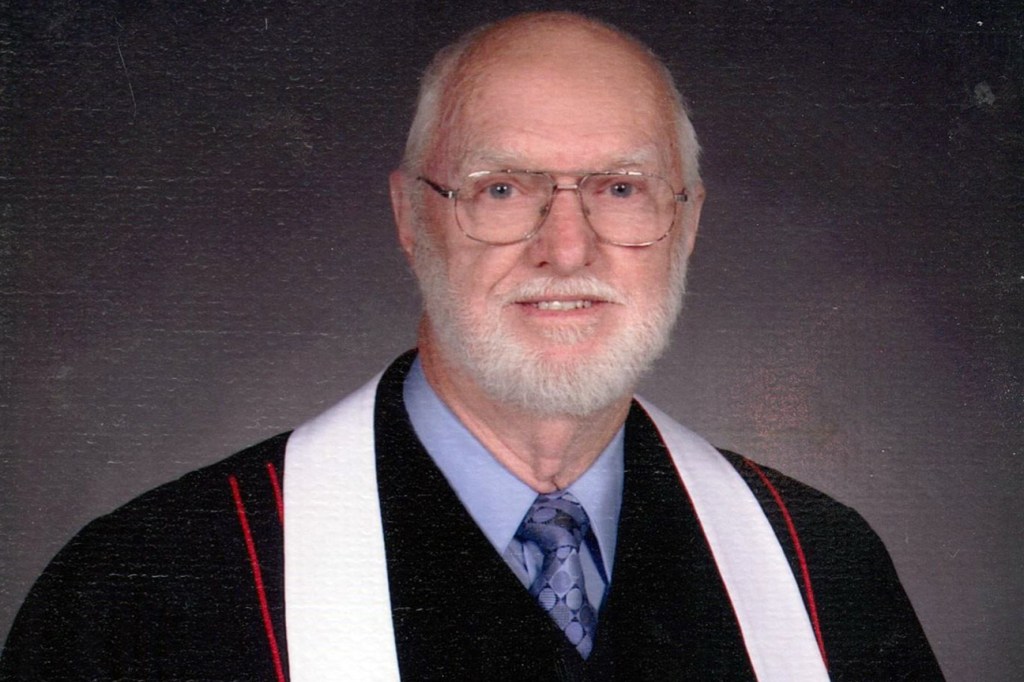 ERNUL – Rev. Reuben “Perry” Turner, 81, went home to be with The Lord on February 11, 2020. He was born May 22, 1938 in Farmville, NC and was the second child of Jasper Perry Turner and Audrey Bishop Turner. He graduated from Plymouth High School where he enjoyed playing in the band and attended East Carolina University.

Perry was very talented and enjoyed sharing that talent with others. In addition to painting several portraits, scenes and houses, he also loved restoring and driving his Model A’s and 1969 Ford Pickup. His favorite past time was spending precious time with his family and friends and most importantly, sharing God’s Word.

He loved to sing, play his guitar, write songs and poems. Perry was in radio broadcasting for 17 years, Promotions Director of Target Records, spent some time in Nashville, TN, and recorded several records.  He had the privilege of directing, producing and acting for many years with Raleigh Theater, Goldsboro Playhouse, New Bern Civic Theater, Repertory Players and Twin Rivers Theater. He proudly served in the National Guard and served as Cub Scout Master of Cub Scout Pack 231.

He owned and operated his own Masonry business for 20 years, which gave him and his family the opportunity to be a part of The Lost Colony for ten years. He played five major roles, Simon Fernando, Old Tom, Governor White, Historian and Sir Walter Raleigh. His favorite of course, was Old Tom. Perry also played a major role in “Worthy is the lamb” his wife and 2 grandchildren, Bryan and Julie Branton were also in the production.

Thank you to Dr. Ken Wilkins, Dr. Marcus Earle and the staff at New Bern Internal Medicine, CarolinaEast Medical Center, Grantsbrook Rehab & Nursing Center, Kindred at Home, and Community Home Care & Hospice and volunteers. A special thank you to our church families and friends for your loving support and prayers as we traveled through this difficult journey. A very special thank you to Judy and Bobby Ipock, Sarah and Sonny Blackburn, Dicky and Betty Crawford, Rev. Mike and Jennifer Ledbetter, Rev. Danny and Cathy French, Rev. Charlie and Janet Greene, Jerry and Wanda Gaskins, Jay Tyree, Doug Brown and Paul Gaskins for your 24/7 assistance, love, prayers and support. Thank you to each of you for the visits, food, cards and calls. Our journey would have been must more difficult without each one of you and the love and support you provided to our family. Most importantly, thank you for the prayers.

Flowers are welcome or donations may be made to Kitt Swamp Christian Church or the charity of your choice in his memory.

A Celebration of Life will be held at 1:00 p.m. at Kitt Swamp Christian Church, 320 Aurora Road, Ernul, on Saturday, February 22nd with Rev. Danny French and Rev. Charles Greene officiating. Visitation will follow the service and Interment will take place in a private ceremony at the Hill Family Cemetery on a later date.

Arrangements by Cotten Funeral Home & Crematory. Online condolences may be made to the Turner family at www.cottenfuneralhome.com.