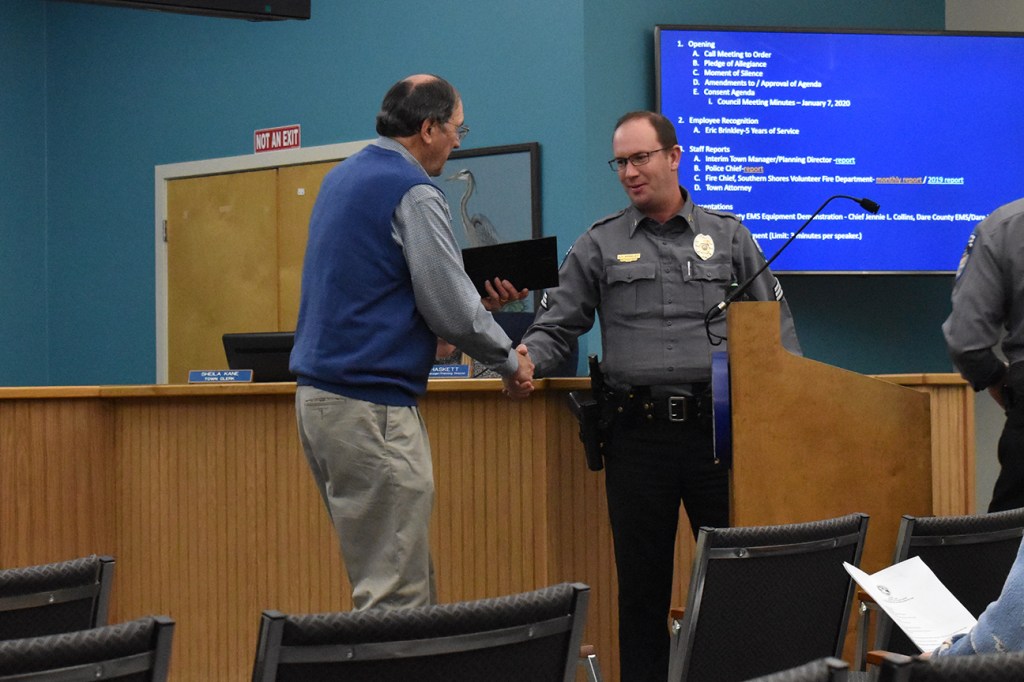 At their monthly meeting on Feb. 4, the Southern Shores Town Council discussed amending their contract with Bay Disposal, hiring a consulting firm to assist in finding a new town manager and what the plans were for a potential beach nourishment project.

To begin the meeting, Police Chief David Kole recognized Officer Eric Brinkley for his five years of service with the Town of Southern Shores. Kole commented that Brinkley has been “a true asset to the Southern Shores community” and “guides his office well.”

Interim town manager/planning director Wes Haskett then highlighted some street improvement projects, including improvements to E. Dogwood Trl. A bidding for this project took place and RPC Contracting came in as the lowest bidder at $222,172. The project will begin soon and is set to be completed by May 1, 2020.

Haskett then presented information on the amendment with Bay Disposal; the town had been approached regarding this issue in December of 2019.

Due to the current recycling market, the recycling facility that was made available to Bay Disposal is no longer accepting materials. Instead, the materials are being taken to a waste-to-energy facility in Portsmouth, Va. known as Wheelabrator.

The contract amendment included a budget amendment in the amount of $16,780. Haskett noted that the amendment would last until the end of this fiscal year. He proposed that council authorize town staff to work with Bay Disposal and the town attorney to amend contract accordingly.

Haskett requested the amended contract address the minimum number of days for notification of any changes from 10 days to 30 days moving forward. He also wanted the motion to state that taking materials to a waste-to-energy plant, or other types of facilities that are not recycling centers, to only occur on a temporary basis.

“I received word that there was a meeting with NCDEQ (North Carolina Department of Environmental Quality) and some local jurisdictions where NCDEQ has said that they, along with some nonprofit groups and other interest groups, want to help out the current situation in this area with respect to recycling,” Haskett told the board.

He said after contacting a representative with NCDEQ, he learned that NCDEQ is looking to try to bring a new recycling processing plant to northeastern North Carolina.

Councilman Jim Conners made a motion to the effect of Haskett’s criteria for the amended contract and budget. Councilman Leo Holland seconded this motion.

Councilman Matt Neal spoke up and added he wanted to amend the motion to include reevaluating the contract at the end of this fiscal year, “so we’re not locked into an automatic price increase going into next fiscal year,” he said. The motion carried unanimously.

“I don’t think we can go wrong,” Morey said. Mayor Tom Bennett made a motion to ask The Mercer Group to “help us in our search for a new town manager.” All were in favor.

Haskett then relayed to the council where the town stood in terms of a potential beach nourishment project. During their January work session, the council had spoken with DEC Associates regarding financial planning. DEC representatives Doug and Andrew Carter had noted that Dare County would be willing to contribute around 50% of the funding for a project like this.

“It has been confirmed that DEC models are correct, should negotiations be successful,” Haskett said. If the town decided to move forward with the project, negotiations would need to take place. In the meantime, Haskett spoke on what measures are being taken by staff at this point.

During the January work session, the council had asked staff to look into municipal service districts to see how the tax rate could be split if the town were to take on this project. Haskett explained that Southern Shores would have to obtain the assessed values of these properties from the county assessor’s office.

The assessor’s office was expected to present the assessed values for the 2020 year at the Dare County Board of Commissioners meeting on Feb. 18. Haskett said it would be “best to wait until we have those numbers,” and then proceed with the looking further into funding options.

Haskett said staff hopes to obtain all information and present their findings to the board regarding beach nourishment by the March council meeting. Bennett commented that the council is still “in the research stages” of this process and is “going to try to do what is best for our town.”

Conners added that the entire council has been very heavily involved with discussion about this matter. He said they are “trying to get a direction and steer this timeline” to make a final decision on beach nourishment.

The next Southern Shores Town Council meeting will be held at the Pitts Center on March 4 at 5:30 p.m.