UPDATED: Portion of NC 12 in Kill Devil Hills closed due to gas leak 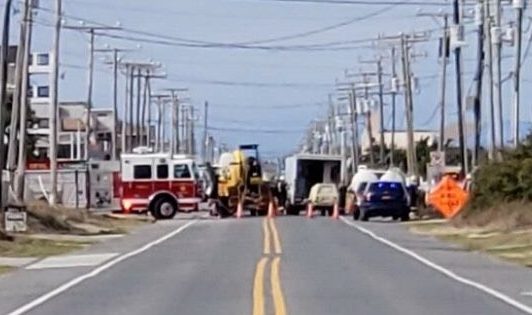 Around 2:30 p.m. on Tuesday, February 25, the portion of NC 12 between Tanya Dr. and First St. in Kill Devil Hills was closed as a safety precaution due to a natural gas leak, according to information from the Town of Kill Devil Hills. Construction crews were drilling and inadvertently stuck a gas main.

Fire and police crews from Kill Devil Hills were immediately called to the scene and began implementing safety precautions.

No injuries have occurred and no evacuations have been ordered.

KDH Fire Chief Frank Roepcke has confirmed the leak is from a natural gas line. He said the line has been in KDH for over ten years. The gas itself comes from Louisiana, whereas the pipeline is from North Carolina, according to Roepcke.

The Town of Kill Devil Hills signed a mutual agreement with Eastern North Carolina Natural Gas Company for KDH right-of-ways in 2005. It was a franchise ordinance and may be found on the town website under Title XI, Chapter 116: Natural Gas.