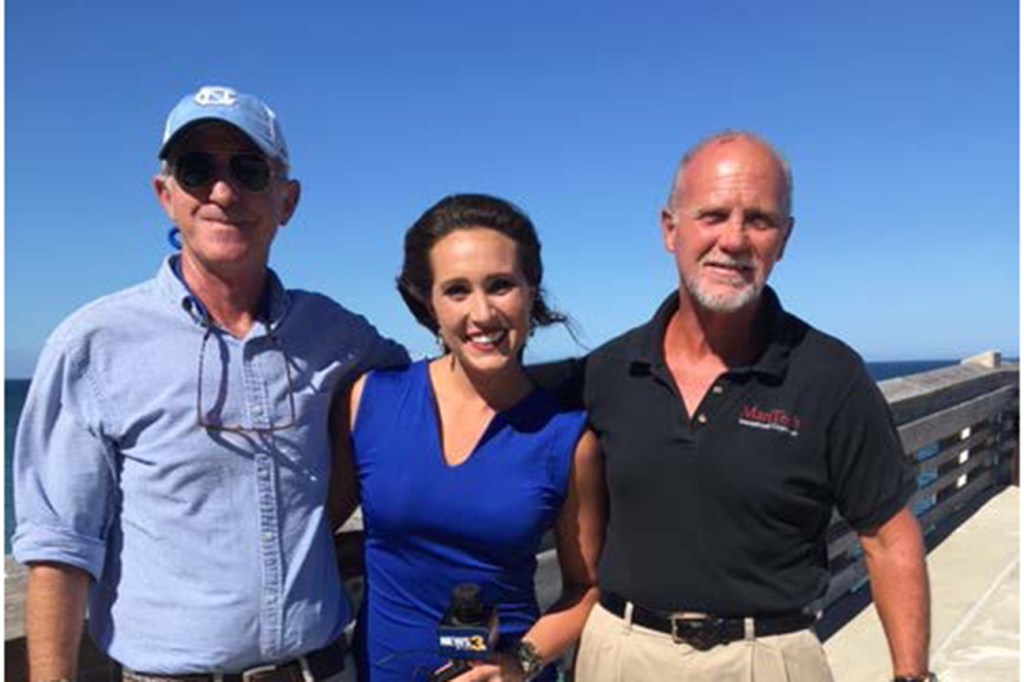 John Railey, left, Rachael Cardin and Buddy Tillett in August 2018 at Jennette’s Pier in Nags Head, the site of Brenda Joyce Holland’s last date in the summer of 1967. Rachel, then with WTKR, was doing a story on the case. Kim Holland Thorn photo

My friend R.D. “Buddy” Tillett of Manteo is one of the bravest men I’ve ever met.

Buddy, a former Dare County deputy sheriff, a father and grandfather, just learned he has stage 4 pancreatic cancer. He meets it as he has met the other battles of his life: with Outer Banks courage. And he wants the truth to come out about the biggest unsolved case of his life, the Lost Colony murder case of 1967. He reopened the case in 1995 and attained a confession in the case against a prime suspect, he says, although the informant, now dead, demanded anonymity.  “Oi want justice,” Buddy says in his brogue.

Buddy is wiry and charismatically coiled, forever ready to strike out in support of those lucky enough to be his friends. We bonded over our shared commitment to finally bring justice for Brenda Joyce Holland, the beautiful 19-year-old makeup supervisor for The Lost Colony whose body was found in the Albemarle Sound in July 1967, ironically called “The Summer of Love” in the rest of the nation. A pathologist said she had been strangled, and, quite possibly, sexually assaulted. Her slaying, first investigated by Dare County Sheriff Frank Cahoon and a special team of State Bureau of Investigation agents, remains unsolved, despite strong evidence Buddy and I have found pointing to the probable killer.

Buddy and I are about the same age and both grew up hearing about Brenda’s case, Buddy in Manns Harbor and me over on the beach, where my “Uncle Billy” Tarkington ran, with Sheriff Cahoon, the Ocean House motel, the headquarters for the SBI team.

Gradually, I persuaded Buddy to tell me his story of the case, first on background for a series of stories in The Coastland Times in the spring and summer of 2018, then on the record in my upcoming book about the case, and in this column. Some Roanoke Islanders wanted the story to stay buried and told him so. And here is where Buddy’s courage comes in again. Even as he struggled to make a living after his time at the sheriff’s office and worried that speaking out on the case would cost him work, Buddy could not stay silent.  “There was a lack of aggressive investigation in following where the evidence led,” he told me last week. “Brenda went home in a body-bag and her mother buried her the day after her 20th birthday. The case was just left hanging.”

Buddy is an evangelical Christian, and his entrance into the case was almost mystical. In 1995, Deputy Tillett was working his side job, manning his feed store in Manteo, when a customer noted he was reading Daisy Canfield, a 1973 novel loosely based on Brenda’s case. The customer, a woman, told Buddy he needed to call Brenda’s mother. The woman, who didn’t give Buddy her name, jotted down a phone number for the mother, a number that Buddy later realized was unlisted. He called it, the first of many phone talks he would have with Brenda’s mother, Gerri Holland, at her home in the mountains west of Asheville.

At Gerri’s urging, Buddy said he would try to re-open the case, but could not promise anything. Buddy talked to key witnesses in the case, who were starting to die away. His interviews led to a suspect whom earlier investigators had exonerated. And then, one night, as Deputy Tillett responded to a call, a man told him that suspect had confessed the killing to him, but swore Buddy to secrecy. That man and the suspect are both dead now. They’ll come out in Buddy’s revelations in the book.

Buddy left the sheriff’s office in the late 1990s to pursue other job opportunities. His work on Brenda’s case was not followed up.

Buddy told me last week that Brenda is still calling the shots from above, connecting us as friends and allies in her fight for justice. I believe him. Our circle includes Brenda’s siblings: Kim Holland Thorn; Charles Hoyt Holland; and Anne Holland Earley; as well as Claudia Fry Sluder Harrington, whose ex-stepfather was a prime suspect in the case. Kim said last week: “Buddy worked many off-time hours re-investigating the facts and suspicions of this cold case. Our family will always be grateful for his tireless dedication as his work did lay the solid foundation for justice for Brenda.”

Last week, Buddy planned to go to New Hampshire to live with family there as he undergoes treatments. He said that he’d like to start a new fight, one to raise public awareness of pancreatic cancer and encourage new treatment strategies. Please send waves of Outer Banks love his way.

John Railey can be reached at raileyjb@gmail.com. He is working on the first nonfiction book on the Lost Colony murder case of 1967 and is the author of Rage to Redemption in the Sterilization Age: A Confrontation with American Genocide. He is a veteran newspaperman.

Guest Opinion: Our medical innovation system is under assault

Guest Opinion: Our medical innovation system is under assault