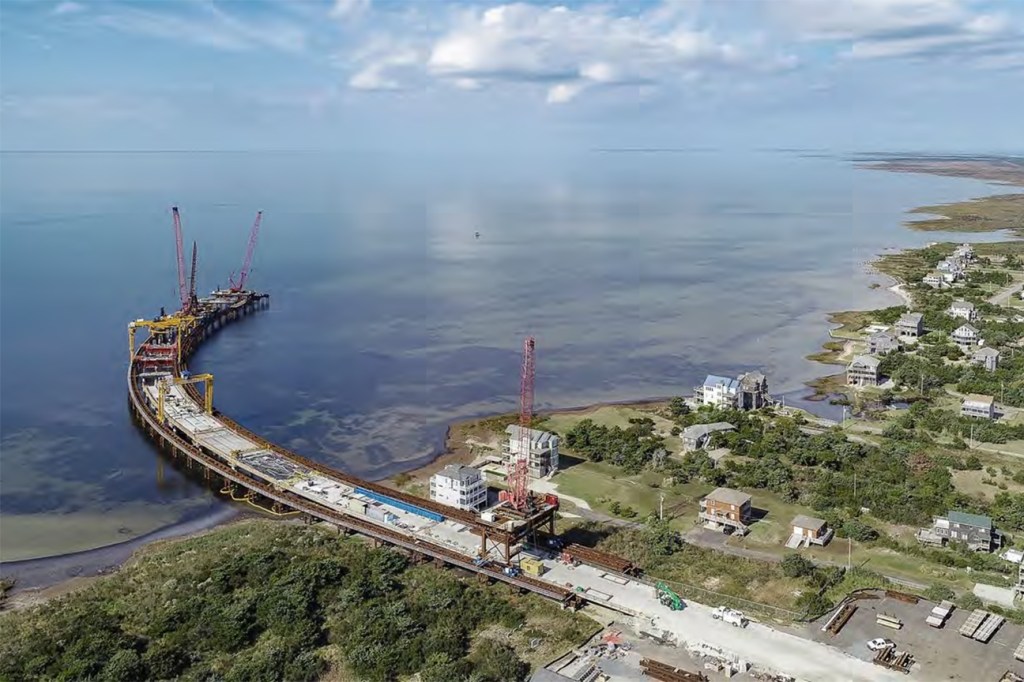 Completion of the Rodanthe bridge is expected in the fall of 2021.

Progress has been slowed by weather. Cranes have an operating threshold of 30 miles per hour at the top of the equipment. Winds of that speed have swept across Rodanthe and Pea Island this winter.

The bridge is about 28% completed as of March 5. Three months ago, the bridge was 24% completed.

Work on the roundabout is expected to resume sometime late March to mid-April.

As in the past with bridge work, no daytime lane closures are permitted June 15 through Sept. 15.

This Coastal Monitoring Program was first part of the research required for the terminal groin. In 1989, oceanside erosion threatened the south end of the Herbert C. Bonner bridge. The answer was to build the terminal groin, which was accomplished 1990-91.

In 2010, the study area was expanded southward to the Refuge-Rodanthe line. The monitoring program works to identify vulnerable areas now and in the future and to plan for future phases of the NC 12 Transportation Management Plan.

The research now incorporates both the sound and ocean shorelines and Pea Island.

The collected data yields vulnerability indicators which are island width, dune elevation and critical buffer between the road and surf zone.

To find trouble spots, researchers look for an island width of 1,000 feet, a dune height less than 10 feet and a 230-foot critical buffer between the edge of pavement and the shoreline.

When the three criteria line up, action needs to be taken. The only place with all three criteria in place is the S-curves north of Rodanthe, which the now-under-construction Rodanthe bridge addresses.

Other vulnerable places where two of the three criteria are present include the canal zone at the northern part of the island, the area around the refuge visitor center and south of the New Inlet.

Mom’s Sweet Shop: A unique spin on an ice…