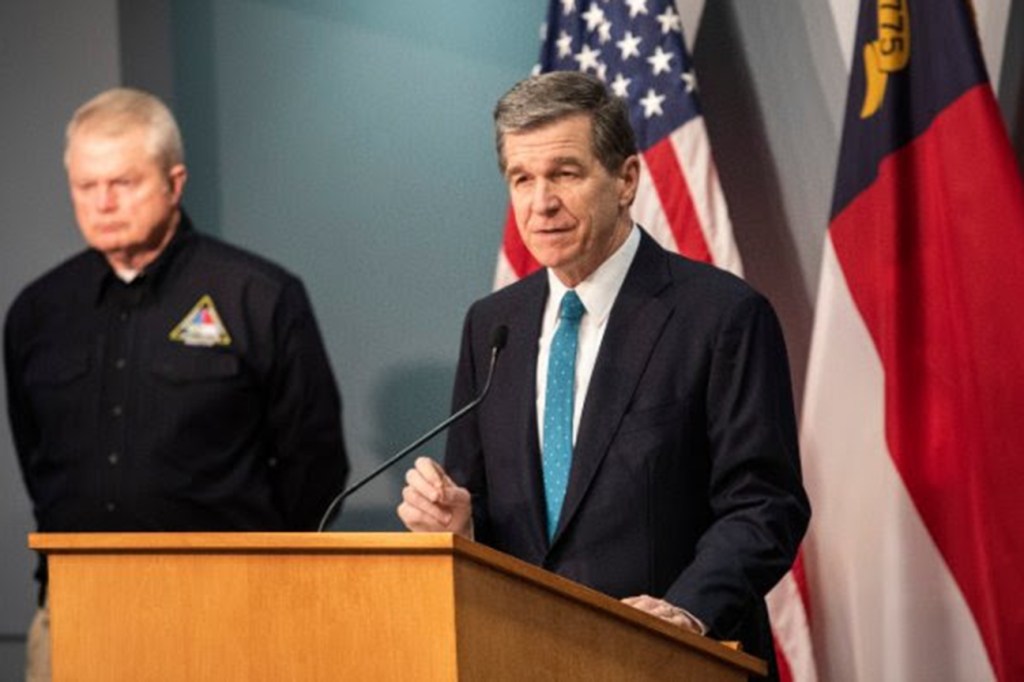 North Carolina’s governor said Monday that he could ease some coronavirus-related restrictions on businesses after April if social-distancing practices continue to slow the virus outbreak over the next two weeks.

Meanwhile, corrections officials said they are letting some inmates out of state prisons early if they didn’t commit violent crimes and fit criteria such as being at high-risk for COVID-19 complications and nearing the end of their incarceration.

Gov. Roy Cooper stressed at a news briefing that relaxing restrictions meant to slow the virus outbreak would be gradual — and that lifting them all at once would be a “catastrophe.” He said he’s discussing with epidemiologists what steps could be taken after the end of April to help the economy. Current measures include only allowing restaurants to serve takeout and delivery, restricting many nonessential businesses and making grocery stores follow social distancing and occupancy limits.

“We know that staying at home is not sustainable in the long run, but the evidence is overwhelming that right now staying at home saves lives,” Cooper told reporters, adding: “We need people the next two weeks to really put the foot on the gas and to stay at home as much as possible.”

But he added that “North Carolina’s economy needs to be jump-started,” and that he’s working with experts on how to do that while still protecting people’s health.

Dr. Mandy Cohen, the state’s secretary of Health and Human Services, said social distancing had helped the state achieve “our goal of flattening the curve, having fewer people get sick at the same time.”

As of Monday morning, North Carolina reported approximately 4,800 confirmed cases of COVID-19, including 86 deaths. Around 300 people were hospitalized, representing a slight drop from Sunday.

Meanwhile, more than 560,000 people had filed unemployment claims since March 16, the majority of them citing the COVID-19 outbreak as the reason.

North Carolina Department of Public Safety Secretary Erik Hooks announced that the state prison system, to fight the spread of the virus, was allowing some inmates out of prison early to finish serving their sentence under community supervision. The approximately 500 offenders under consideration for the sentence modification must not have committed violent crimes. Key factors being considered are their age, health conditions and how close they are to their existing release date. Prison officials said that 35 inmates at six state prison facilities and 20 staff at 10 facilities have tested positive for the virus.

The move by the prison system comes after civil rights groups and several prisoners asked the North Carolina Supreme Court last week to order state corrections officials to release offenders who are at higher risk for infection and those already scheduled to be released soon.

For most people, the coronavirus causes mild or moderate symptoms, and the vast majority survive. But for others, especially older adults and people with existing health problems, it can cause pneumonia or death.