The Southern Shores Police Department received a call Friday, April 17 at 4:28 p.m.  about an incident at the Wells Fargo bank branch in Southern Shores.

According to Lieutenant Jonathan Slegel, a male operating a Nissan Titan was driving around the east side of the building and when he went to put the vehicle in park, he hit the gas and the vehicle went through a window on the southeast corner of the building. 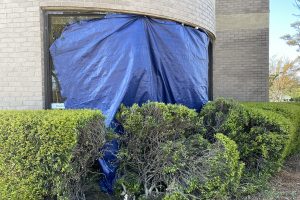 “He said he hit the gas instead of the brake,” Slegel said.

Slegel added that the driver was not injured, but there was damage to the building. “The bank was closed at the time, so no employees were on scene at the time of the accident,” said Slegel.

Crews covered the damaged corner of the building with a tarp.

The driver was charged with careless and reckless driving.