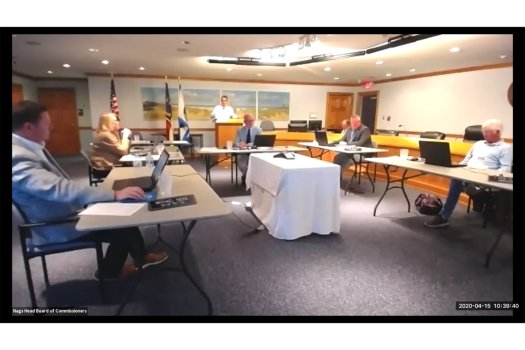 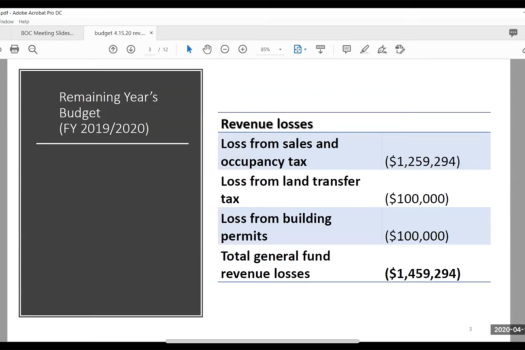 On April 15, the Nags Head Board of Commissioners met in their usual meeting room, each at their own desk apart from one another, and conducted a live stream of their regular monthly meeting.

On the agenda was a rather lengthy public comment, where letters were read aloud to be recorded in the minutes. Mayor Ben Cahoon and town manager Cliff Ogburn spent more than the first hour of the meeting reading the submitted letters.

The majority were from non-resident property owners, addressing their concerns with the county bridge closures and the status of re-opening the island.

Following public comment, finance officer Amy Miller led a public hearing. She asked the board to consider adoption of a reimbursement resolution to finance the sidewalk pedestrian path, the fuel tank/pump conversion and improvements to Dowdy Park.

The cost of these projects would not exceed $1.4 million and were identified in the fiscal year 2019/2020 budget. The resolution was adopted after a unanimous vote by commissioners.

Planning director Michael Zehner then addressed the board with a CAMA access grant for improvements to the Huron St. beach access. Commissioner Webb Fuller was “against committing any taxpayer money” to the project until there was a better sense of budget cuts.

After Zehner clarified that no funds would need to be expended to apply for the grant, the board agreed to move forward with the application process and would revisit the grant at a later date.

Before moving onto a discussion about the remaining year’s budget for fiscal year 2019/2020, Mayor Cahoon updated the board and viewers on the next steps for the Dare County Control Group.

“We have been in discussion about having a discussion about what steps are towards reopening the beach,” he noted. Mayor Cahoon said chairman of the control group Bob Woodard had asked members to assemble thoughts on re-opening to be discussed towards the end of the week or starting the week of April 20.

Ogburn then took the stand to walk the board through his rather conservative plan for the budget. With a projected revenue loss of about $1.5 million, Ogburn said he is expecting to receive 33% of the normal sales tax revenue for April, May and June of 2020. He noted that before COVID-19, Nags Head was “up some in revenues overall.”

Ogburn’s assumption was that sales and occupancy tax would not reach 100% until, at the earliest, October. “It’s difficult to come up with these figures,” he admitted, not knowing whether or not the country would see another spike in COVID-19 cases heading into the fall.

On Ogburn’s list of cuts to help compensate for the loss was lifeguards, the Dowdy Park deck project, recycling, part-time/seasonal positions and more.

For lifeguards, Ogburn pointed out that there are J-1 students from Canada that normally come to work, but are unable to cross the border at this point in time. He suggestion was to cut the lifeguard staff in half, saving approximately $106,000.

As for recycling, Ogburn laid out the three options the town had to choose from: either continue their contract with Bay Disposal and the incineration of recycled materials ($70/ton), enter into a contract with a new facility to process recyclables ($81/ton) or cancel the program temporarily until the town has a better idea of what it to come following the pandemic.

If the town were to enter into a contract with the recycling facility in Portsmouth, the cost would be $57/ton for processing and a $23/ton fee to haul the material with Outer Banks Hauling. Ogburn said that currently, the town has not been penalized for contaminated materials with their current contract, but this would change with the new facility.

“They would penalize for contaminated recycling . . . they can reject the load,” Ogburn said. Commissioner Renee Cahoon answered: “We’re going to have to pay for contaminated loads? That’s scary.”

After making clear the fact that Ogburn would not be coming back with better numbers, the board agreed to revisit the item for a final decision at their May 6 meeting. However, there was a general consensus that suspending the program may be the most viable option at this time.

“I think the public is prioritizing expenditures,” Fuller noted. He added that the board could always come back to recycling in the future and perhaps considering franchising down the road.

Ogburn asked to board for approval of moving the budget meeting to May 20. “This gives me time to present a clearer, cleaner picture,” he said. Mayor Cahoon agreed this would be smarter, given that a decision on re-opening could be made the beginning of May.

In terms of feedback for Ogburn, Fuller felt the conservative budget was more realistic at this time. He felt the “x-factor” was when the county will open and when it does, what tourists will be willing to spend once here.

“Everything here is discretionary,” Mayor Cahoon started, “People have lost income. To what extent will they take a vacation, and then if they do go on vacation, to what extent are they going to spend in restaurants compared to what they would otherwise?”

Restaurants, golf courses, adventure parks and more are in question this summer, all depending on when the town will bustle again. The board agreed that time is of the essence for decisions on yearly budgets, recycling programs and expenditures overall.