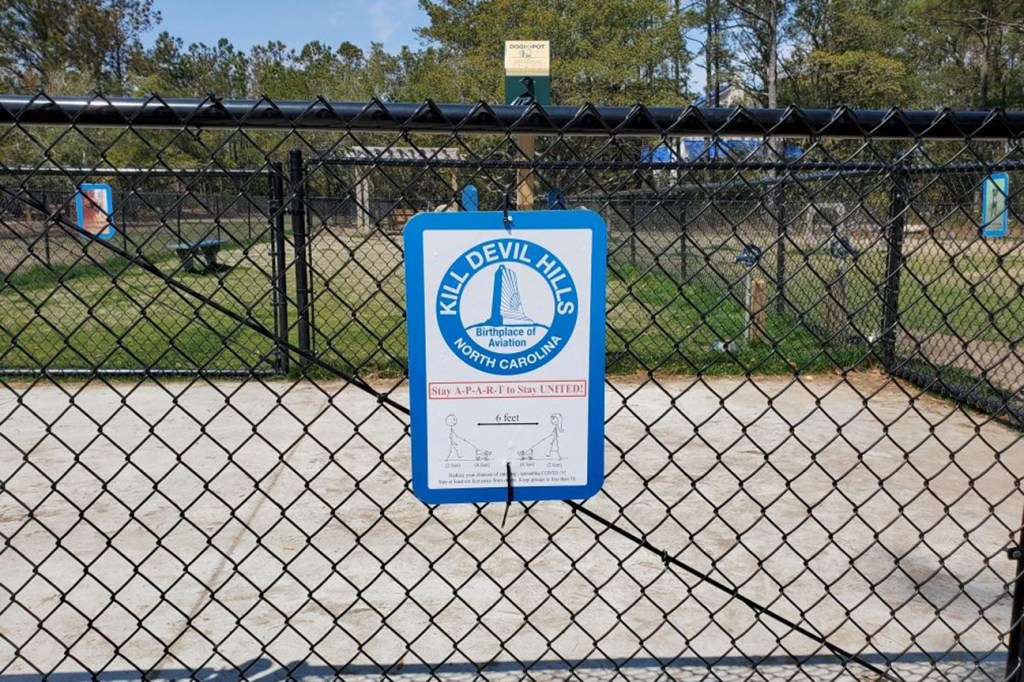 The Paws Park in KDH has established signage asking users to stay 6 feet apart and have no more than ten people in a section at a time. Courtesy Rachel Tackett, Town of Kill Devil Hills

For many, the past several weeks has brought about a lot of change. People everywhere have had to adjust to a “new normal,” meaning more time spent at home.

More time at home means more shared time with the ones living under the same roof. This goes for both individuals and pets.

Despite having to close down non-essential businesses and recreational facilities, the local dog parks have remained open to the public. With stricter guidelines in place, dog parks provide a place to spend time with pets outside of the home while complying with executive orders.

“We have no plans to close the dog park at this time,” Rachel Tackett with the Town of Kill Devil Hills said. KDH established Paws Park in June of 2019, featuring three separate areas designated to dogs of various ages and sizes.

In an effort to maintain social distancing and the well being of the community, Tackett said signage has been added to the park. This signage asks users to stay 6 feet apart, with no more than ten people gathering in one section at a time.

Tackett said the dog park will remain open, unless users choose not to comply with newly enforced regulations.

The Nags Head dog park remains open as well. The Town of Nags Head has promoted social distancing and plans on keeping the park open. No issues or lack of compliance have been reported thus far within the park, according to the town.

As for the Roanoke Island Kitty Hawk dog parks, both are maintained by Dare County Parks and Recreation. Tim White, public services director, updated The Coastland Times on what the current status of both parks is.

White explained that Dare county is constructing a new SPCA building where Roanoke Island dog park currently resides. On April 14, contractors began removing the fencing around the park as well as the shade tent.

Before the park can reopen to the public, drainage areas will need to be filled and replanted grass will have to take. “It will probably be a good 90 days before we can get back in there,” White informed.

The dog park will move to the west of its previous location, White said, next to the new SPCA.

For updated information, White directed the public to the Roanoke Island Dog Park Facebook page as well as the Dare County Parks and Rec website, www.darenc.com/departments/parks-recreation. “We want to keep everyone notified of what’s going on,” White said.

Hearts for Heroes: A gratitude initiative during COVID-19