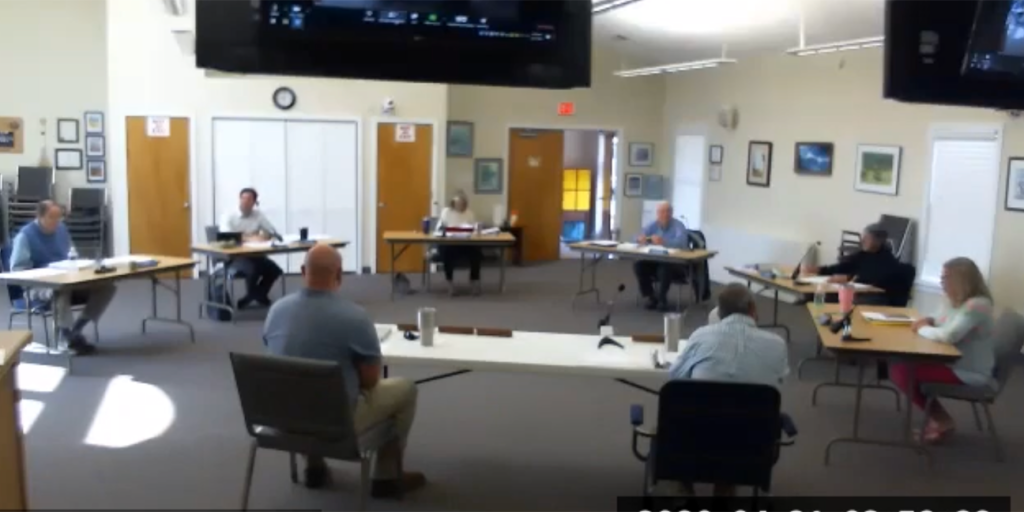 The Southern Shores council meeting streamed live on April 21 as council members and town staff met in the Pitts Center.

At the Southern Shores budget workshop on April 21, members of the Town Council discussed at length how to account for an unbalanced fiscal year (FY) 2020-2021 budget. All members were present in the Pitts Center to partake in the meeting while maintaining their social distance.

Mayor Tom Bennett made it a point to update the public on the ongoing town manager search prior to the start of the meeting. The council had met on April 20 in a closed session with the town attorney to review the qualifications for their candidates.

Bennett reported that he was “pleased not only with the number, but the experience level that [the candidates] brought to the table.” Interviews will take place May 1.

Swain’s “worst case scenario” for remaining funds in the budget, if no more money was collected this year, was a total of $595,048.

Her drafted FY 20/21 budget assumed a 50% decrease in July in occupancy tax for the fiscal year. Assuming travel patterns will return to normal, the percentage is anticipated to flatten from November on.

Swain felt that by late fall, the town would have a better idea of where they would be with sales tax; in the meantime, she projected a 5% decrease from last year’s actual numbers along with a 2.5% decrease in land transfer tax.

With an assumed revenue total of about $5.9 million and about $6.3 million in expenditures, the general fund summary for FY 20/21 reflected a negative difference of approximately $350,000.

To compensate for the loss, Swain and interim town manager Wes Haskett suggested options such as cutting expenditures/services, using the unassigned fund balance or increasing taxes, should the current tax rate remain at 0.22.

Ultimately, the Dewberry Ln. improvement project was put on hold. Mayor Pro Tem Elizabeth Morey noted that, “In regular times, this would be a no brainer . . . but there are so many things we don’t know.” The council agreed to revisit the project in fall after a re-bidding, saving around $85,000 in the budget.

The next cut came with capital improvement projects. The budget accounted for $662,340 in CIIP money; Mayor Tom Bennett felt it best to take what is needed to balance the budget out of those funds, leaving the leftover money as a line item.

After Bennett formed a motion to that effect, councilman Matt Neal amended the motion to have some CIIP money set aside for the hiring of a building inspector and one-time bonuses for town staff in the amount of $1000 for full-time employees and $500 for part-time staff.

The motion was also amended to have the CIIP funds used to offset salary expenses for the police department after a grant of $45,000 was denied.

The council also agreed to delay the town pay study. As for the “No Left Turn” initiative, which started last year to help alleviate traffic at S. Dogwood Trail by closing the left turn lane, council decided to not include it in the budget. However, they agreed to revisit the item in June and make a possible budget amendment to have the program run three weekends in July at a cost of $6500 per weekend.

Recycling will remain the same in Southern Shores for now; council agreed to keep their contract with Bay Disposal and continue sending recyclables to the Wheelabrator facility in Portsmouth.

Although a new contract came up in conversation, one involving Recycling and Disposal Solution (RDS), councilman Jim Conners felt the contract was too stiff with no severability clause and a commitment of five years.

“If we continued with recycling, I’d rather go the Wheelabrator route because that’s a more firm number and not as variable,” Conners said.

The council agreed they wished to continue pursuing other recycling options, including RDS, in the meantime.

Haskett then revisited the topic of beach nourishment with some new information: three coastal engineering firms were interviewed and scored to work with the town on a nourishment project.

Haskett released that APTIM Coastal Planning & Engineering scored the highest. He said the next step required applying for a grant to fund a beach nourishment project and/or remodel Pelican Watch.

The application cost, Haskett said, would not exceed $4900. Morey moved to send over applications for both projects. Haskett informed that, to the best of his knowledge, only one project could be chosen for funding.

Dare Board of Education makes adjustments to balance budget

Food trucks and pop-up vans hit the road to…