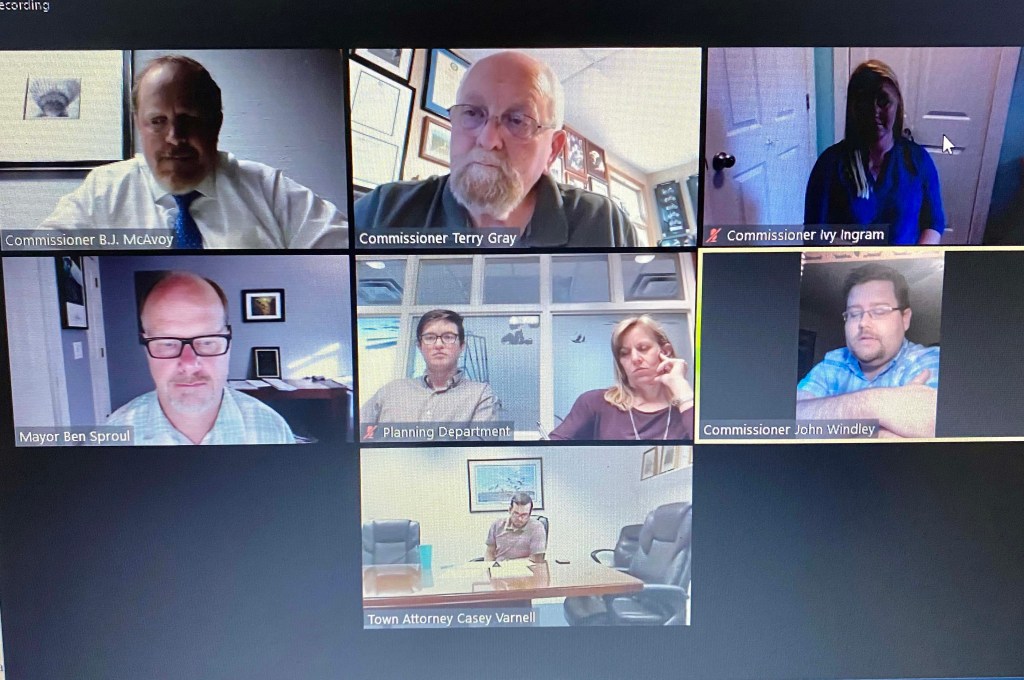 The KDH commissioners met via Zoom for their April 22 meeting to discuss a new fuel center and public hearings on larger dwellings.

Kill Devil Hills commissioners held their April 22 regular meeting over the Zoom platform. The public was invited to virtually attend while the board discussed plans for the new Harris Teeter Fuel Center and scheduled a slew of upcoming public hearings.

The proposed fuel center is planned to be constructed at 2006 S. Croatan Hwy in Kill Devil Hills. Plans include seven manual fuel pumps, a walk-in kiosk, canopy, two underground storage tanks and nine parking spaces. The fuel center will sit adjacent to the current Harris Teeter grocery store, but will not be owned by the same company.

Commissioner John Windley asked assistant planning director Cameron Ray about the possibility of a deceleration lane with one entrance to the grocery store in an effort to promote traffic safety.

Ray explained that a deceleration lane would not meet North Carolina Department of Transportation’s design standards. “We support interconnectivity of those sites, but the . . . deceleration lane was not found in NCDOT’s recommendation,” Ray said.

Commissioner Terry Gray then asked about the signage compliance, being that the applicant had proposed a 58 square foot LED-lighted sign for the building. Planning director Meredith Guns confirmed that the formula used to generate signage square footage was accurate with this plan and the request was in compliance.

Following a motion made by Mayor Pro Tem Ivy Ingram to approve the site plan was consensus from the board and the motion carried unanimously.

The commissioners also approved the June 8 public hearing to discuss the flood damage prevention ordinance. Guns reminded the board that adoption of the ordinance is needed on or by June 18. “We were given no extension on that,” she noted.

While that public hearing was set for June, there were five others set for May 11. These hearings will address several larger home topics, such as off-street parking and loading, setbacks in each zoning district, landscaping requirements and cottage courts/cluster homes.

Town manager Debora Diaz explained that in June 2019, the General Assembly has repealed a chapter of the general statutes dealing with local government’s use of special obligation bonds to finance projects such as beach nourishment.

“Without it, our capacity for borrowing money for beach nourishment would be greatly jeopardized,” Diaz said. The commissioners found consensus in sending a letter to state representatives and local governments in support of reinstating the authority to borrow using special obligation bonds.

Town attorney Casey Varnell also had one item on his agenda, pertaining to a submitted petition dealing with the abandonment of a portion of Bay Drive.

Varnell went on to explain that an irregular shaped portion of land, bound on all sides by the petition’s applicant, was mistakenly recorded in the Register of Deeds office.

After reviewing the minutes of a 1993 meeting where the land was in question, Varnell said it appeared as though the board at that time had approved for the land to be abandoned. However, the wrong survey was included in the description of the land.

Varnell posed two options for the board in order to proceed with the requested petition: either call a public hearing to revisit the land in question or accept the original decision of the 1993 board as true.

Commissioner BJ MacAvoy said, “it sounds fairly clear that the property was to be transferred, however I’m always a fan of going through that last step of a public hearing if necessary.” The rest of the board found it appropriate to respect the original decision.

In a vote 4-1, the board chose to move forward with the original decision and forgo a public hearing.

Mid-meeting, Sproul addressed the efforts of the town and county: “I think everybody trying to do the best in a tough situation,” he said.

In light of the developments that has surfaced prior to the KDH meeting regarding Currituck’s decision to allow their property owners in before Dare’s are allowed, Sproul said everyone seemed “quite surprised by the turn of events.”

Despite the decision, Sproul said he received some positive emails in response to how the county had responded. He shared that about 60% of the emails were appreciative, “which in this world is a win.”

“All members are doing their part to try and steer us towards a solution that balances all the things that need to be balanced . . . so we look back on this and feel we did our very best to find the right path for each of the incremental steps that we will take.”