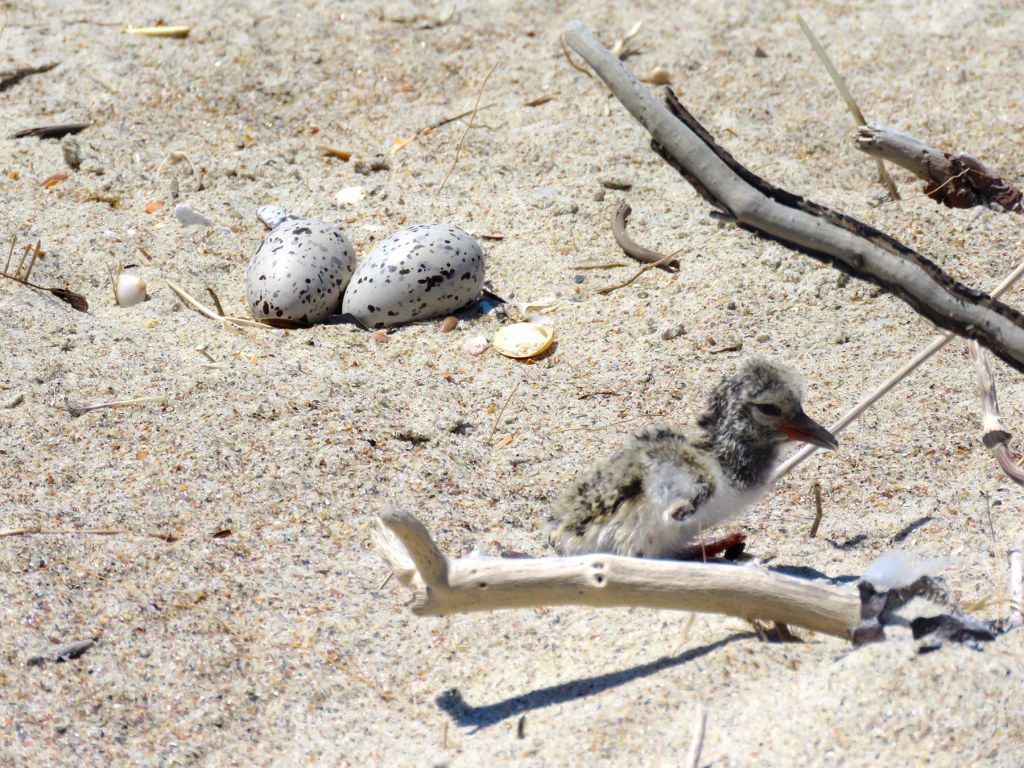 Watch where you step and give nesting shorebirds (like this American oystercatcher chick and egg) a wide berth. Annika Andersson/NCWRC courtesy

Before hitting the beach this summer, the North Carolina Wildlife Resources Commission advises that visitors should remember to “share the shore” with beach-nesting birds, giving them, their eggs and chicks a wide berth.

Shorebird nesting is now underway along the coast and biologists with the WRC urge people to watch where they step while on the beach because these birds can be very sensitive to human disturbance. Eggs and chicks are well camouflaged, so they can be easily stepped on and crushed by humans as well as pets. Getting too close to a nesting bird can cause it to fly off, leaving the eggs or chicks vulnerable to the elements or to predators.

“Birds have their ways of letting you know when you’re too close,” said Dr. Sara Schweitzer, WRC’s Wildlife Diversity Program coordinator. “They’ll do things like dive-bombing you or calling loudly. Some species will pretend to have a broken wing to lure you or other perceived predators away from the nest and chicks.”

Skimmers, terns, oystercatchers and plovers are some of the bird species that nest on the beach. Populations of several of these species, such as the common tern, gull-billed tern and black skimmer, have plummeted in recent years, mainly due to human disturbance and habitat loss. However, increased monitoring efforts and protections have led to stable or increasing numbers of nesting American oystercatchers and Wilson’s plovers along the North Carolina coast, according to WRC.

Because many visitors may not recognize fragile bird-nesting habitat, WRC posts signs around important beach-nesting areas and islands. The black-and-white signs help visitors avoid nesting grounds from April 1 through Aug. 31 – the sensitive nesting and brood-rearing season – and advise that entering an area can result in the loss of eggs or chicks.

WRC staff remind boaters as well to be mindful of nesting birds on islands, particularly if they approach an island posted with the black-and-white signs.

“We would really like everyone to abide by the posted areas and stay off islands that are marked as bird-nesting areas,” Schweitzer said. Also note that no dogs are allowed on posted islands. “One dog can destroy an entire bird nesting colony in minutes, so please keep your dog on a leash at the beach and do not let them on bird nesting islands between April 1 and Aug. 31,” stated a WRC release.

Some islands that serve as beach-nesting habitat are not marked with black-and-white signs, such as many of the state’s marsh islands in the sounds. Schweitzer recommends that people give these islands a buffer between their activities and any nesting birds.

“American oystercatchers, for example, nest on several small islands along the Intracoastal Waterway and other small islands in sounds, and most of these islands are not managed by the Wildlife Commission and are not posted,” Schweitzer said.

Likewise, not all nesting areas on the beach are posted, so coastal visitors, as well as residents, should be aware of their surroundings whenever they are in areas that birds prefer for nesting and raising chicks. Other ways beach-goers can help protect nesting shorebirds are by:

– Keeping dogs on a leash at all times. Dogs may chase and harass birds, as well as trample nests, killing chicks or crushing eggs.
– Driving only on the lower beach and driving slowly enough to avoid running over chicks.
– Taking trash when leaving the beach, including bait and scraps from cleaned fish, all of which can attract predators, such as gulls, raccoons, feral cats and foxes.
– Discarding fishing line or kite string in an appropriate receptacle. When left on the beach, these materials can entangle and kill birds and other wildlife.
– Not feeding gulls on the beach. Gulls are a major predator of young chicks and eggs.

Captain of the Port reopens Port of Morehead City