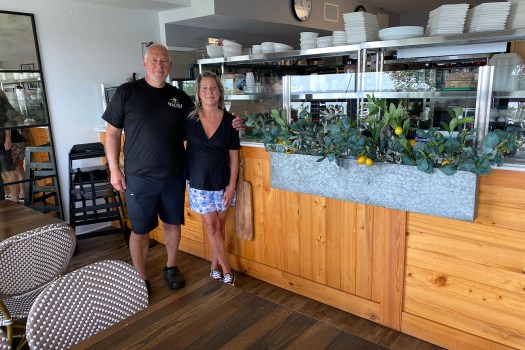 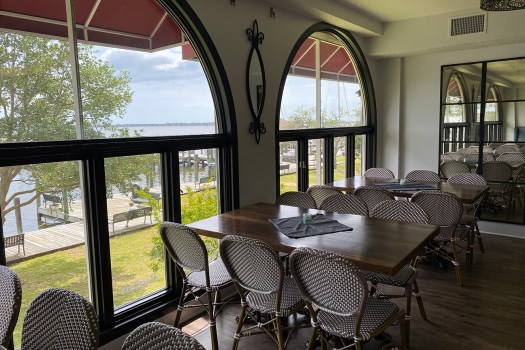 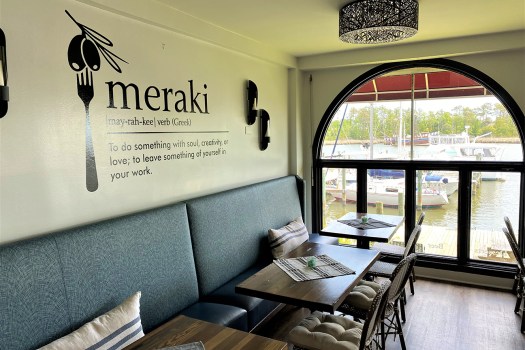 Olives: A Greek Kitchen is located in the Waterfront Shops in downtown Manteo. Danielle Puleo photo

Olives: A Greek Kitchen came to the Waterfront Shops of downtown Manteo in March. Despite the onset of the COVID-19 pandemic forcing them to serve take-out only just weeks after opening, owners Nick and Gayle Mourgides are excited for their new restaurant venture in the Outer Banks.

As you open the front door of Olives, the aroma of home-cooked Greek food wafts through the air towards you. Looking around, the restaurant is speckled with modern takes on traditional, comforting décor.

Towards the back of restaurant, large glass windows overlook the marina and customers are able to watch the light bustle of boats as they travel along the waterway. Traditional Greek music meets your ears as you settle in at the new establishment.

In an interview with The Coastland Times, Gayle and Nick said this isn’t their first go at the restaurant business. “Olives started twenty years ago in Rochester,” Nick said.

After meeting one another at church, Nick and Gayle said realized they had a lot in common: both are 100% Greek, had parents who ran Greek diners and grew up in the same area. Nick said that right after he met Gayle, he remembered her saying, “one day, we should open up a little Greek place.”

Their little dream became a reality when an old salon in Rochester became available. After gutting the structure and establishing a business, Gayle and Nick started bringing their hand-me-down Greek recipes to the people of New York.

Ten years after the first Olives was established, a property right across the road went up for rent. The couple decided to transition over and transformed their smaller restaurant into a 1500 sq. ft. property with outdoor dining.

After twenty years, they sold the restaurant to former employees and moved to the North Carolina coast. “We couldn’t be happier living here and having a business here,” Gayle shared.

The two came to the Outer Banks with the idea that they would semi-retire, but after finding their Manteo property listed on Craigslist, they fell in love. “For one, I love Manteo. The people are really quite nice, the area is great and the fact that we could run it by ourselves” made the property the perfect fit for the couple.

When asked about the difference between running a restaurant in upstate New York and having one here in the Outer Banks, the couple agreed the clientele and produce are the two main dividing factors.

“I think the people here are generally warmer,” Gayle offered, but agreed with Nick that their customers in New York were faithful and supportive of their dream.

Nick said that produce is harder to come by down here, which made for a menu adjustment. He added that the menu is “very specific because things are baked instead of fried.”

Olives is not allowed to have a fryer, so everything on the menu is freshly baked. “Customers will walk in and say they’re happy to see no brown, fried food on the menu,” Nick said.

Gayle said her main goal is to have her customers come in, sit down and feel at home. “When you come in, I want you to be comfortable. It’s the music, it’s the foods, it’s the smells,” she said.

Although they weren’t sure how they would be accepted on the island, coming in with a new ethnic menu, Gayle said the restaurant has been very well received.

“We were surprised with the responses we got on Facebook from people that were Greek,” she said. Gayle shared that several locals are well educated on Greek cuisine and the couple will often get requests from the community for specialty Greek dishes.

As far as a philosophy, Gayle said growing up as a server made her want to treat her employees and customers with the same care and respect she had sought.

The kind, hospitable atmosphere coupled with the traditional food and great views that Olives offers are what make Gayle and Nick proud of their new restaurant. They are excited to fully open again once COVID-19 restrictions are lifted.

For more information on Olives, visit their website at www.olivesagreekkitchen.com.