In NC, testing the use of drones to drop medical supplies from sky 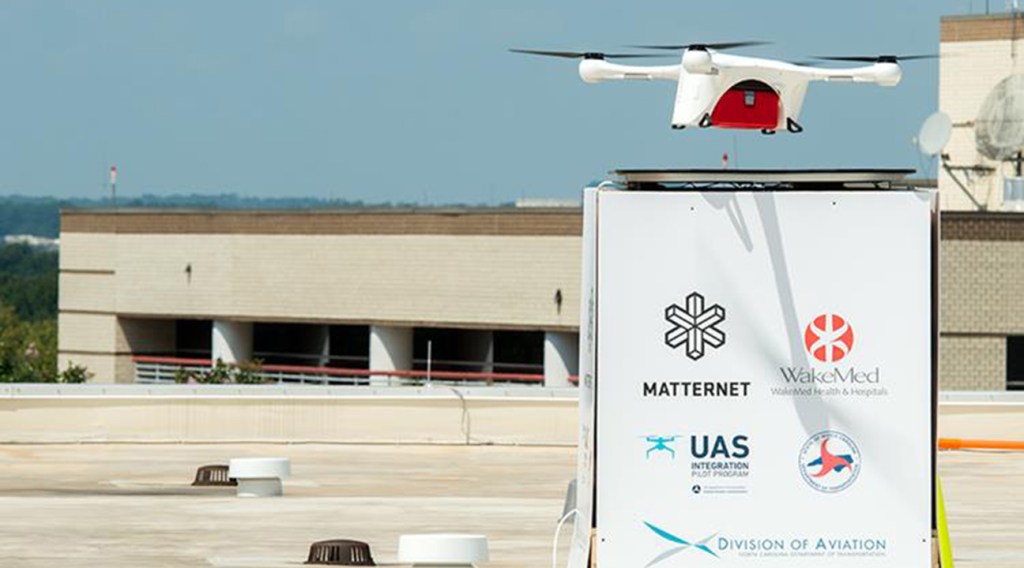 The North Carolina Division of Aviation on Aug. 29, 2018, teamed up with WakeMed Health & Hospitals and Matternetto to conduct the first round of test flights for drones to deliver medical packages. Courtesy NCDOT

With a loud whir and a whoosh, a fixed-wing drone slingshots out of a medical warehouse, zips through hazy skies at 80 mph, pops open a belly hatch and drops a box of medical supplies. Slowed by a little parachute, the box drifts downward and lands with a plop, less than eight minutes after launch.

For North Carolina Department of Transportation’s Basil Yap, it is a eureka moment.

The COVID-19 pandemic has exposed the deadly consequences of fractured medical supply chains. Drones, said Yap, may be part of the solution. Proponents say they eliminate the need for delivery trucks and avoid human contact.

For more than a year, North Carolina — where modern aviation was born, at Kitty Hawk — has been the site of tests of drone deliveries, in coordination with the Federal Aviation Administration.

The FAA usually requires that drones operate within sight of their operators, which limits the distance they can fly; for these flights, an exception has been made.

One of the first personal protective equipment drone drops in the U.S. took place this week.

The drone was launched by Novant Health, Inc., which operates 15 hospitals and close to 700 different facilities in the southeastern U.S. The health care system said it hopes to use regular flights to deliver masks, gowns, gloves and other protective gear.

In the future, the company hopes to use them for testing, drug trials and vaccine distribution.

“The COVID-19 pandemic has tasked us with being even more nimble and innovative in how we solve complex challenges,” said Angela Yochem, Novant’s chief digital and technology officer. She said discussions about drone deliveries began more than a year ago, pre-pandemic.

She was there for last Friday’s test drop.

“It was exhilarating,” she said.

The drones launch from Novant’s logistics center in Kannapolis, carry up to four pounds, and have a round-trip range of 100 miles. Yochem foresees a day when two tons of medical supplies can be delivered every week. Novant hopes to get FAA approvals to send them to hundreds of additional facilities, and eventually, possibly, drop prescriptions at patient’s homes.

The drones are operated by Zipline, a Half Moon Bay, California-based company which has made more than 40,000 deliveries abroad, including major medical supply programs in Rwanda and Ghana. This is their first U.S. partnership.

“This is something that can have a big impact on equality of access to health care, and treating the most vulnerable members of our population,” he said. “So although COVID-19 makes the need even more dire, we really view this as something that can help over the long run.”

Drones are already being deployed around the world as part of the response to COVID-19. Police launched them to enforce or monitor lockdowns in Israel, Italy, France, China, India, Kuwait, United Arab Emirates and Spain. They’ve been used to enforce social distancing in New York City and New Jersey. In Dubai, they have been used to spray disinfectant on streets.

The San Francisco-based Electronic Frontier Foundation has warned that government use of drones to monitor or enforce the movement of people during their COVID-19 response is a “slippery slope.”

EFF policy analyst Matthew Guariglia said Wednesday that while using drones to keep workers safe is a good idea, he has concerns about “mission creep,” or how the drones are used after the pandemic passes. He also said officials should be thinking about patient privacy as drones are delivering prescriptions to homes.

Prashant Yadav, a senior fellow at the D.C.-based Center for Global Development who focuses on global health supply chains and forecasting, said today’s efforts will be useful in preparation for future disasters.

“Even if today we can send personal protective equipment via trucks, there may be other threats or a future pandemic which could cause other disruptions, so it’s good to be prepared for this,” he said.

“Will this become the widespread way of PPE distribution to hospitals? Probably not anytime in the near future, but it could become useful for lab test delivery in many different ways, specifically the turnaround time for lab tests.”