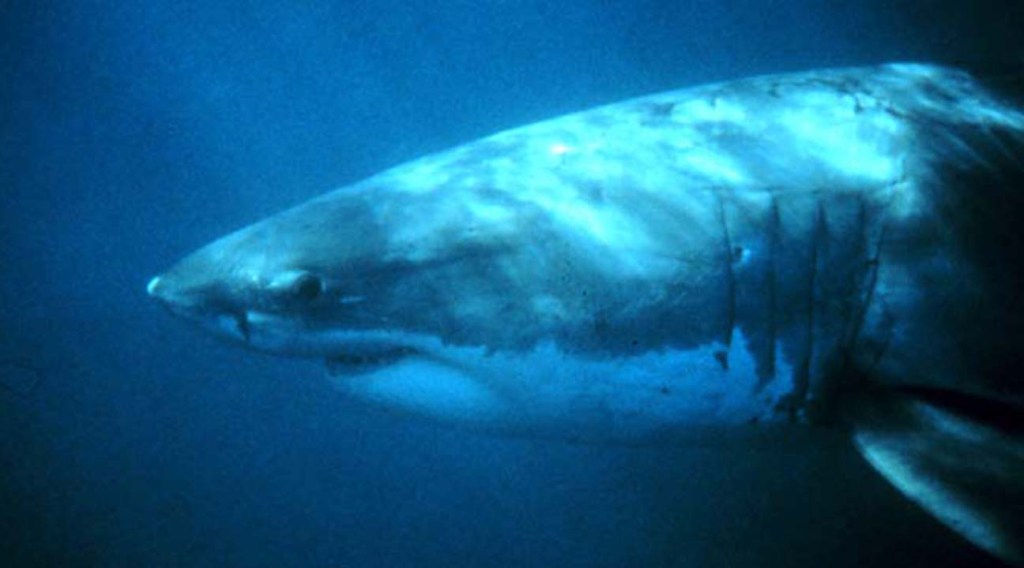 I watched the 1975 Steven Spielberg movie JAWS the other night; “rewatched,” that is, for the second or third time. I think the originals of blockbuster movie hits always turn out to be better than the sequels. Good movie. Lots of suspense, strong characters, believable plot. Or is it? Do great white sharks get that big? Could a great white shark actually swallow an adult human whole? Are they that aggressive? Are they common in inland waters? The naturalist in me wants to know.

Researching this was an eye opener. There are specimens, caught and measured, that look as large as the one (a mechanical facsimile) in the movie. They grow to over 20 feet — that is about two car lengths — and can weigh over a ton. The largest one on record taken in South Carolina waters was 15 feet long and weighed in at more than 1,200 pounds.

A large great white shark has a gape of over a yard, so the scene in the movie where the shark swallows the old shark hunter Quint is surely possible. Also, Quint’s spine-chilling story about multiple shark attacks on sailors stranded in the sea following the sinking of their ship is likely based on the actual event of the sinking of the cruiser USS Indianapolis by a Japanese submarine in 1945. Of the 900 initial survivors helpless in the water and undiscovered for four days, just 316 were rescued. Many of them were killed by sharks.

Fifty-six species of sharks are known to frequent Carolina waters (of some 350 species worldwide). Of these, the tiger, bull, hammerhead, mako, dusky, blue, black tip, and great white are the most dangerous to humans, and the great white grows the largest and has acquired the most fearsome reputation.

That sharks send shivers up your spine is no surprise, since evolution has shaped them so right down to the details.

Also, sharks, epitomized by the great white perhaps, have a streamlined torpedo-shaped body and plenty of muscle mass. They can swim up to thirty-five miles per hour in pursuit of prey.

Sharks are armed with over 50 sharp triangular serrated teeth, with multiple rows of teeth behind ready to move forward to replace lost teeth.

Sharks have a battery of keen senses. In addition to excellent sight, smell and hearing, they possess a “lateral line,” a row of sensory cells running the length of the body for detecting movement in the water at long distances, especially the thrashing motions of an injured fish or a human swimmer or surf boarder. And there’s more. There are special organs in the snout and head, electroreceptors that detect minute electrical fields, such as those emitted by muscles when they contract, even the pulsing of the heart muscle of prey hiding under bottom sand or mud.

(Incidentally, this is the reason for the death of Steve Irwin – Australian wildlife celebrity – by a sting ray in 2006. Sting rays are shark cousins that also have these eletroreceptors. Apparently, the provoked sting ray aimed straight for Steve Irwin’s heart, literally stabbing him in the heart, with the seven-inch poisoned barb on its tail that it can flip up like a switch blade knife. Its electroreceptors told it just where to aim since the heart muscle emits faint signals as it pumps blood (the same principle upon which your doctor’s EKG machine is based).

Great white sharks become more frequent in inland coastal waters in the summer months, just when we human want to enjoy the beach and an ocean dip, moving in from deeper waters beyond the continental shelf. They are worldwide in distribution, so we get our share.

The remaining point I raise above about great whites and the movie “Jaws” version of them concerns the relentlessness with which the great white pursues the three men hunting it. We need that for the suspenseful drama of the movie, but how credible is it?

I have heard of instances of the human hunters becoming the hunted with, for example, grizzly bears and lions. It should be natural for an apex predator to go with its hunting instincts as its defensive strategy. I’ll just let this question dangle. To press it too much might spoil the movie.

Yet shark attacks in North Carolina, and elsewhere, are rather rare. Worldwide, there are only about five authenticated deaths from shark attacks per year. More people are killed each year from falling coconuts (150 per year), never mind falls, auto accidents and such. It turns out the hippopotamus is the world’s most deadly animal — well, except for humans — killing 500 people per year in Africa. So why are shark attacks not more common given that sharks are an exquisitely made killing machine?

I think it is time to count our blessings and enjoy the beach as summer is just around the corner. Just don’t stand under any coconut trees.

Travel note: Aurora NC in Beaufort County has a great fossil museum and an annual Fossil Festival, which among other curiosities of our coastal past, features fossil sharks and other marine creatures, including a truly gigantic ancestor of the great white known as Megalodon. The name means “giant tooth,” which it truly is, about 6 inches long. The shark was estimated at being over twice the size of our extant great white, over 45 feet long. But rest easy, it is now extinct. It lived from about 20 million to 1 million years ago.