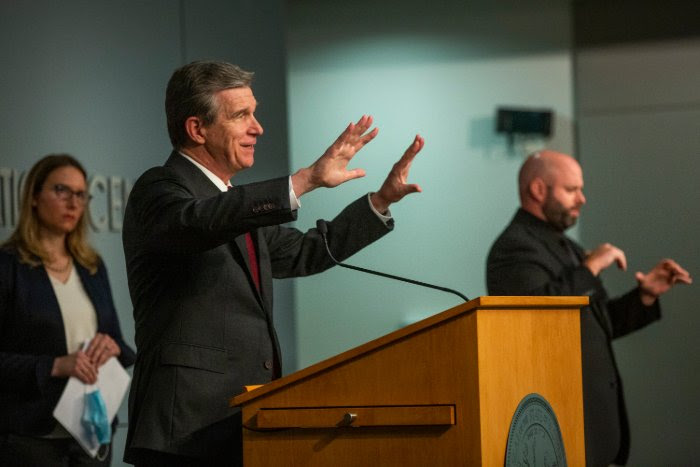 North Carolina Gov. Roy Cooper said on Monday he’ll announce early next week whether businesses still shuttered because of COVID-19 will  be allowed to reopen.

Under Cooper’s current order, restaurants can offer dine-in seating, and barber shops and hair and nail salons are open — but all at reduced capacity. Bars, movie theaters, bowling alleys and gyms remain closed. Cooper has to decide whether to extend the order, which expires June 26, or modify it in some way.

At a media briefing, the Democratic governor said the decision will be based on science and data. He said he remained concerned by the continued uptick in cases and hospitalizations, in particular the trends in nine counties. Overall, the number of positive COVID-19 cases exceeded 45,100 as of Monday morning, according to state health data. More than 1,100 virus patients have died since the pandemic began and almost 800 people are currently hospitalized.

“Right now, they’re not trending in a good direction, but we still want to give this more time,” Cooper said. He pitched the idea that the public could stop a “second wave” of cases by practicing social distancing, including the wearing of face maks, to prevent its spread.

“We believe that we can get a handle on this,” Cooper said. “That being said, we will always do what is the best for the health and safety of North Carolinians.”

Cooper also said his administration is considering whether to issue an order mandating wearing face masks in public. Employees in personal service businesses such as hair and nail salons already are required to wear them.

Cooper said he spoke with Vice President Mike Pence over the weekend about North Carolina’s trends. He said he asked Pence and the federal government for more resources for testing sites. The number of completed tests surpassed 638,000 as of Monday. The state is currently working toward testing residents in all nursing homes. More than half of North Carolina’s COVID-19-related deaths involve nursing home residents.

Several lawsuits have been filed against Cooper by owners who are still closed, saying his executive order is preventing them from earning a living.

The legislature also has tried to overturn his orders with bills reopening gyms as well as bars for outdoor patrons. Cooper already vetoed a bill to reopen bars and expand outdoor seating for restaurants, while another measure reopening gyms with the previous changes for bars and restaurants currently is on his desk.

The House Rules Committee voted late Monday for legislation that would allow skating rinks and bowling alleys to reopen as well.