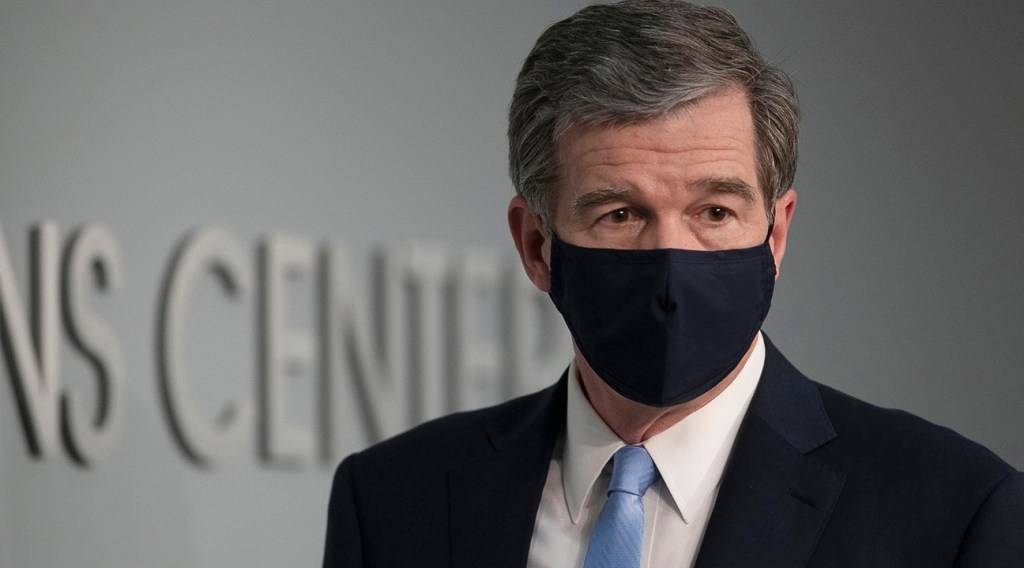 Democratic Gov. Roy Cooper on Friday vetoed another attempt by Republican legislators to accelerate the speed in which North Carolina commerce is being restored through his COVID-19 executive order.

The vetoed measure  would have allowed fitness centers and gyms shuttered since March to reopen at 50% capacity and require they follow social distancing and cleanliness rules. The bill also tried again to let still-closed bars reopen for outdoor patrons only and expand current outdoor seating for restaurants already partially reopened for sit-down service.

Two weeks ago, Cooper vetoed a bill containing help for bars and restaurants, saying legislation was the wrong way to reopen during uncertain times in which virus cases could spike. The bill vetoed Friday had offered the governor the authority to still shut down the bars and gyms under his emergency powers, but only with the agreement of the Council of State. The veto shows the “fail-safe” legislators said they gave him wasn’t enough.

“Tying the hands of public health officials in times of pandemic is dangerous, especially when case counts and hospitalizations are rising,” Cooper said in his veto message. “The bill could restrict leaders who need to respond quickly to outbreaks and protect public health and safety.”

Cooper’s latest executive order expires June 26, and the governor said he’ll announce early next week whether it will be extended or modified to reopen still-closed businesses struggling to survive financially. Cooper has said decisions have been made on science and the data, which recently have had Cooper worried.

The state reported yet another record number of current COVID-19 hospitalizations on Friday with more than 870 patients. The number of positive cases since the pandemic neared 50,000 overall and the number of deaths was almost 1,200, according to Department of Health and Human Services data.

Cooper’s veto stamp seems to have only intensified the resolve of Republicans to send him more bills that challenge his executive orders or preserve activities halted in the name of safety.

The GOP-controlled legislature is sending another bill to Cooper’s desk to allow skating rinks and bowling alleys to reopen at reduced capacities.

The Senate also voted Friday to extend similar reopenings to amusement and water parks, wedding reception venues and fairs and carnivals. The measure, which needs just one more House vote, even would allow restaurants inside stadiums that can hold up to 12,000 spectators to serve patrons up to 10% of a stadium’s seating capacity.

Even July 4 parades and fireworks would be protected from cancellations in another Senate measure on Friday. Parades and festivals are limited under Cooper’s current order  to no more than 25 people.

The bill is “just to make clear that while peacefully protesting is as American as apple pie, so is celebrating the 4th of July,” Burke County GOP Sen. Warren Daniel, a bill sponsor. He added an amendment that also would make it difficult for local governments to refuse a permit to hold Independence Day festivities between July 1-10.

Sen. Natasha Marcus, a Mecklenburg County Democrat, opposed the measure, saying some localities may consider the pandemic threat a good reason to keep people from gathering. “You wouldn’t be able to protect public health as you see fit.” The bill was approved 21-8.

Legislation receiving strong bipartisan support would override rules by public and private hospitals barring patient visitation during the pandemic. The bill would demand that hospitals allow at least one person to visit a patient during a public health emergency or disaster. A visitor would be subject to health screenings.

The Department of Health and Human Services is worried about the bill as it relates to controlling hospital infections, but hopes to see new bill language that ensures it complies with federal laws, the department said on Friday in a statement.