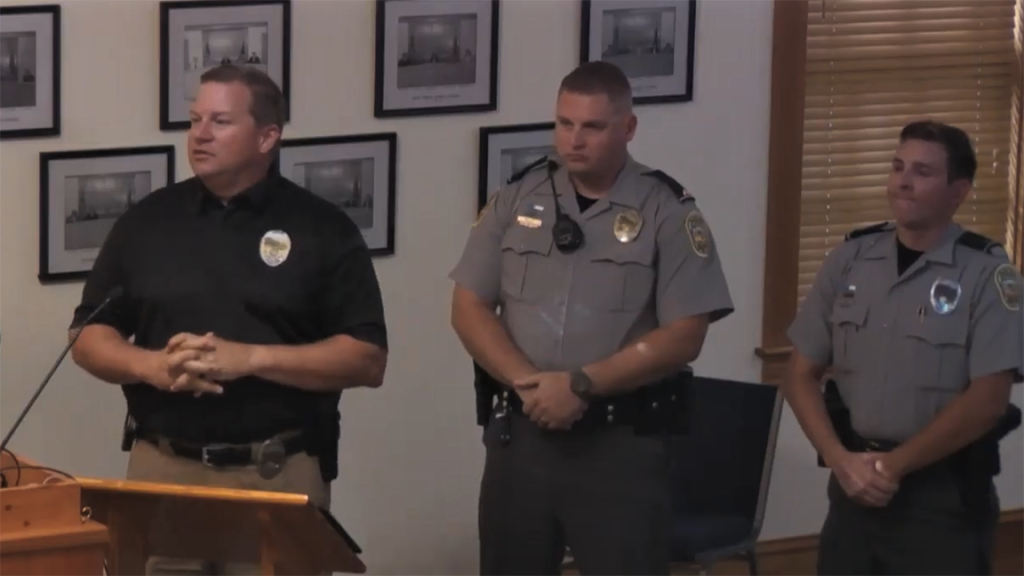 At the June 7 Kitty Hawk Town Council meeting, four out of the five council members were present. Councilman Jeff Pruitt was absent but excused.

The meeting opened with recognitions of two new police officers and a new fire captain. Police Officers Kyle Hubbs and Jason Rigler joined Chief Joel Johnson at the podium for an introduction and warm welcome from council.

“In this time of upheaval and calling for defunding of police and things of that nature, we have been so blessed in Kitty Hawk,” said Mayor Gary Perry. “They are considerate, courteous; we have literally gotten compliments from people who have gotten busted, I mean, how good is that?”

Councilman David Hines added, “I think we have the best police force on the Outer Banks . . . they are underappreciated.”

The agenda then moved to public comment, which brought two residents forward. Jane Webster and Sharon Sullivan both live on Herbert Perry Road and expressed the same concern: the limited turnaround space at the end of their street.

Herbert Perry Road is a state-owned street. “The pavement ends in a T-shape,” Webster explained, “there is tight maneuvering for drivers of collection trucks to get set up to head out.” She noted that trucks have backed completely out of the road instead of turning around due to the limited space.

In a follow-up to a letter she wrote to council, Sullivan asked if the town could act on limiting development and building permits for the road. Both residents indicated the need for a bonified cul-de-sac to ensure safety and maneuverability.

Perry addressed their concerns directly after public comment ended, relaying to the public that he had looked into the matter after receiving Sullivan’s letter.

Perry first called upon Johnson regarding the possibility limiting public traffic. Johnson said that the only way to restrict traffic was in the event of an accident, natural disaster or something else to that effect.

As for limiting development and building permits, town attorney Casey Varnell explained that a moratorium could be a course of action. This would work if the town decided there was an imminent threat to public health and safety, and the solution was to expand infrastructure.

“Moratoriums may not be adopted for the purpose of developing or adopting ordinances regarding residential uses,” Varnell clarified.

As for the tight turnaround, Talley said the fire department had taken the firetruck back to the area and were able to successfully turn the vehicle around, even though there was “no doubt limited space.”

Public Works director Willie Nelson had confirmed with their sanitization director that there were no issues reported in terms of collections on the street, and town manager Andy Stewart reported that school buses have not entered the street in about eight years given the low ridership rate on the road.

Adjustments were made to the road previously, when the T-shaped pavement added an additional 15-ft. of road for buses some time ago. In response to the residents who had come forward, Perry asked Stewart to contact the state about installing a cul-de-sac at the end of Herbert Perry Road.

“It would require taking some land unless given some land,” he noted. Perry also spoke to the fact that the process would take some time, given the financial situation the state is in.

As for other business, the council unanimously approved a final subdivision plat for 3.75 acres of land to be divided into three lots at 4236 Carrenda Lane.

Stewart then relayed to council that the sheriff’s department had agreed to help with traffic control at U.S. Hwy. 158 and NC 12 and the town was just waiting on approval for funding from the Outer Banks Tourism Bureau.

For more information or to view agendas, meeting dates and more, visit the town website at www.kittyhawknc.gov.