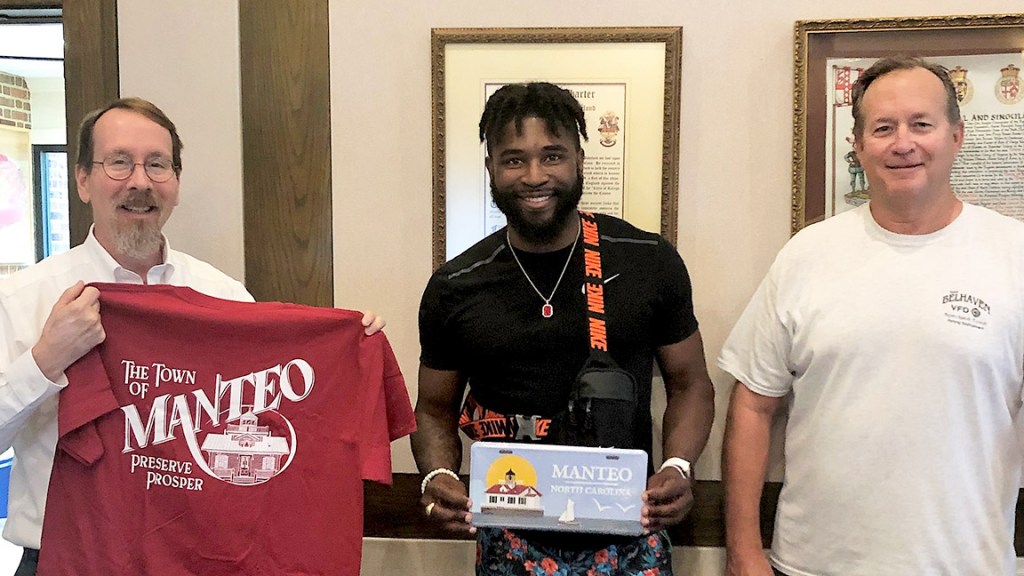 Olympic silver medal winner Manteo Mitchell, center, is given a Manteo T-shirt from town manager James Ayers, left, and license plate from the town that he shares a name with. Hannon Fry, right, invited Mitchell to visit the town after a chance meeting at a football game. Courtesy photo

The Olympic silver medalist at last found a place where everyone knew his name and, more importantly, how to pronounce it. Manteo Mitchell finally visited the town he shared his name with after his girlfriend booked the trip to celebrate his birthday.

As he walked and toured the town in the second week of July, Mitchell was delighted that everyone he met was so nice to him. He was even more impressed that they could pronounce his name. He said, “believe me, I have traveled extensively and people mispronounce Manteo all around the world.”

Mitchell was determined to visit Manteo. Born in western Carolina, he was given the name Manteo by his great uncle Lewis Mitchell. As his uncle was dying from cancer, Manteo Mitchell learned the backstory of how he got the name. His uncle and aunt were childless. Six babies had been stillborn or died shortly after birth. His uncle and aunt’s last child had been named Manteo after the soundside town his great uncle, a Vietnam Veteran, had often visited when he was stationed nearby. 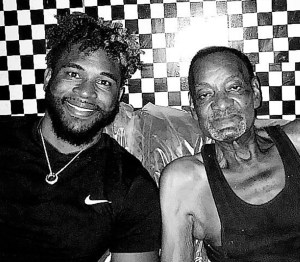 When Mitchell was born on July 6, 1987, his parents named his great uncle as his godfather and gave him the name Manteo as a tribute. As he grew up, he excelled at sports. Mitchell attended Crest High School in Shelby, then on to Western Carolina University, where he would set  records on the track. In 2012, he won a gold medal as part of the 4×400 men’s relay team at the IAAF World Indoor Championships.

His run into sports legend would come as a member of team USA at the 2012 London Olympics. In a qualifying heat, he felt his leg snap halfway through his run. Mitchell, in an amazing feat of determination, fought through the pain to finish his segment and hand off the baton to help his team into the 4×400 meters relay finals, ultimately winning the silver medal. After the race, an x-ray would confirm he had snapped his fibula.

On reflection, Mitchell said he didn’t know how he kept running on the fractured leg; perhaps it was his hatred of losing, perhaps not wanting to let his team down. However he did it, his run became one of the most memorable feats of determination in Olympic history. 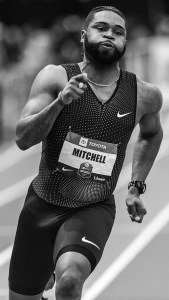 In an amazing feat of determination, Manteo Mitchell fought through the pain of a broken leg to finish his segment and hand off the baton to help his team into the 4×400 meters relay finals, ultimately winning the silver medal at the 2012 London Olympics. Courtesy photo

A couple of years ago, in a chance meeting at a UNC vs Western Carolina football game, his desire to visit the town of Manteo would be rekindled. Hannon Fry, a lifelong Manteo resident, and Mitchell found themselves side by side in an elevator. Fry was sporting a Manteo shirt and Mitchell couldn’t pass up the opportunity to say, “that’s my name.” Mitchell told Fry his story and hope to visit the town that shared his name. The two men from opposite sides of the state struck up a friendship, Fry invited Mitchell to visit and they stayed in touch.

The trip would have to wait a bit longer. Scheduling and the upcoming Olympics left little time. When the pandemic forced the cancellation of the 2020 Olympic games, Mitchell had the time and his girlfriend made the arrangement. He texted Fry that he was coming to town for his birthday. Manteo was finally about to fulfill his desire to come to Manteo.

Fry arranged for Mitchell to visit the town hall. He met the town manager James Ayers, who also hails from western North Carolina. He was given a Manteo T-shirt and license plate. Fry took him to the high school to meet and talk with Alfie Wheeler and Sport Sawyer, athletic director and head football coach, respectively. Wheeler hunted down a Manteo High school baseball jersey with Mitchell’s favorite number “6” on it and presented it to him. A delighted Mitchell said, “everyone kept giving me stuff, cool stuff.” 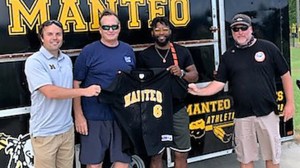 Mitchell spent the remainder of the week snapping pictures to share with his family. He said “everywhere I looked, I saw my name.” A seafood dinner was also on the menu.

Mitchell plans to come back again and hopefully work with local athletes. For now, he will return to Asheville, where he trains. He still has his sights set on returning to the Olympics, if the games can be held next summer.