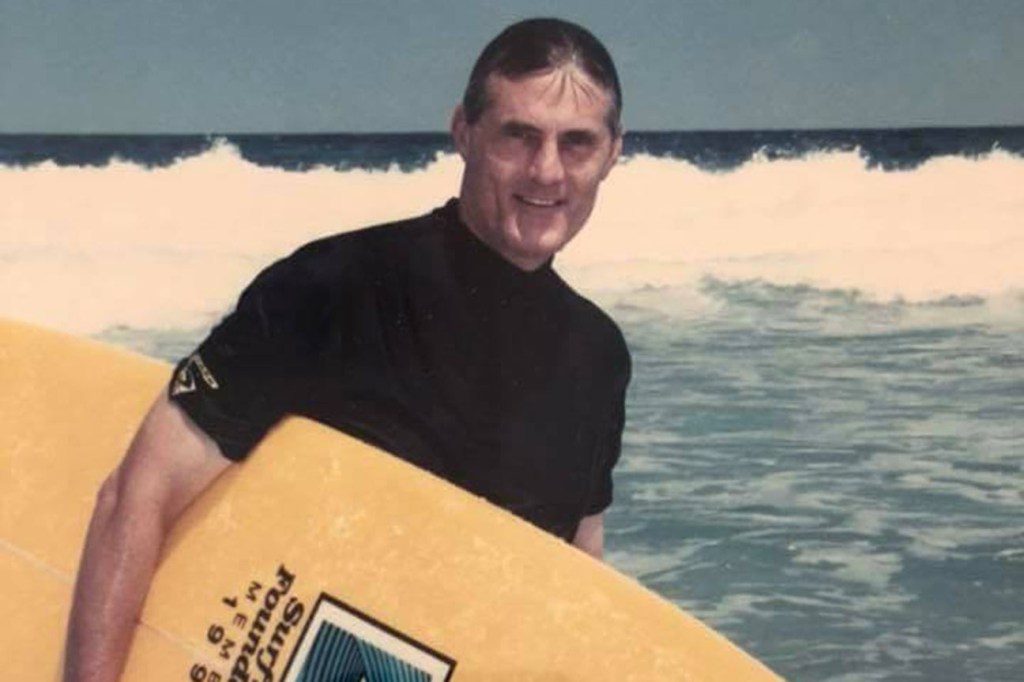 Southern Shores, NC – Outer Banks native Larry Gray rode his first wave in 1954. Sliding down a beautiful glassy right and into a passion that would bring thousands more waves and last a lifetime. On Tuesday, July 21, 2020, Larry rode one final wave to eternal peace. In between those two waves, one real and the other transcendental, an iconic life born of that same passion served to transform not only Larry, but also the entire way of life on these sandy islands we call home.

It is difficult to put any life into a few short paragraphs, and Larry’s transformative existence is no exception. However, if we look at some of the major ideas that defined his time on earth, we can at least get an idea of the man that he was and the impact that he had. To Larry, there were a number of ideas that serve as a lens for us: surfing, athleticism, conservancy, fishing, art, and, most importantly, family.

After that fateful first wave, Larry went on to help inspire a generation of surfers on the Outer Banks. He traveled the world in search of surfing hot spots and in pursuit of that perfect wave, bringing home stories that others would go on to emulate. During the mid-1970s he lived for two winters on the famous Hawaiian North Shore, surfing Sunset Beach alongside legendary surf icon Eddie Aikau. Perhaps one of his biggest achievements in the world of surfing came in 1970, when he won the Cape Hatteras Lighthouse Centennial Surf Competition, performing a perfect frontside 360 during his set to edge out the challengers. His brothers Tony and Ronnie say that some of their own best moments while surfing were alongside their Big Kahuna brother Larry.

Of course, surfing requires no small amount of athletic talent and Larry was not lacking in that department. While attending Elizabeth City High School (1964-’68) he became the ‘Sophomore Sensation’ on his basketball team during one night when he scored 30 points in a single game. He went on to lead the Yellowjackets to three years of success during his tenure. His siblings fondly remember their whole family – led by their parents and Outer Banks’ stalwarts Walter and Estelle Gray – piling in the car to go watch every single game.

After high school, Larry turned his athletic talents to the sport of running and he went on to set a number of personal bests in a range of distances, from the 5K to the Marathon. Getting up at 4 am to avoid the oppressive mid-day heat of the beach, he would lope gracefully along with a group of local running buddies for mile after mile.

This particular passion of Larry’s also brought up another: conservancy. Larry’s love of running led him to organize the first annual Nags Head Woods 5K Run in 1982. A major goal of the race was to allow folks from all walks of life to experience the beauty of the Nags Head Woods and hopefully turn their eye toward its preservation. The Nature Conservancy Nags Head Woods Preserve is a regular beneficiary of a portion of the run’s profits. In 1996, a Coastland Times article said of Larry that the “tone of the run might be said to be an extension of his personality.”

In addition to starting the 5K, Larry’s love of conservancy, athleticism, and surfing led him to help found the Outer Banks chapter of the Surfrider Foundation in 1993. An organization that still helps preserve these shores to this day, the Surfrider Foundation has taken on issues such as water quality and offshore energy while striving to give back to the community via scholarship programs and beach clean-ups. Larry also pursued other conservation efforts by serving as a board member for the Nags Head Woods Preserve and, early on in his professional career, as a park ranger for the Cape Hatteras National Seashore (U.S. National Park Service).

Of course, it’s hard to mention Larry and his career without immediately thinking of Gray’s Family Department Store. Founded in 1948 by Walter and Estelle, Gray’s began as a beachside shop in Nags Head that the whole family lived above and worked for. Eventually, Larry, his brother Ronnie, and his sister Julie would take over the business and oversee 40 plus years of success, expanding, at one time, to 7 different locations up and down the coast.

In addition to financial success, Gray’s has sought over the years to support the local community. This is due, in no small part, to Larry’s love of his island home. Under his watchful and caring eye, Gray’s has sponsored the local Relay for Life and March of Dimes, contributed generously to the Dare Education Foundation, and sponsored a number of local little league teams (which Larry often helped coach).

In 1983, Gray’s Family Store, along with other pioneering individuals, also helped start the Outer Banks Forum, a local non-profit institution that has worked hard over the years to enrich the Outer Banks by bringing in a broad range of cultural entertainment. Again, Larry’s presence in this cannot be ignored; as a lover of music, particularly the Alternative Rock movement of the late 70s, 80s, and 90s, and as an accomplished painter who studied under local artistic legend, Glenn Eure, Larry was a true connoisseur who wished to share his passion with those around him.

Another area that is impossible to separate from one’s thoughts of Larry is deep sea fishing. Although his sister Julie, a champion fisher herself, would argue that he only got started so he could prove he was just as good as her, Larry managed to develop quite the reputation for himself over the past 20 years. Known fondly amongst his fishing buddies as the “Cobia Killer,” Larry provided the main course for hundreds of meals with his family and friends over the years. He also used social media to share pictures of his oceanic conquests and to regale us all with stories of his adventures with his seamates, particularly those times he spent with Captains Ronnie O’Neal and Rick Caton (aka Captain Cussword).

Larry’s greatest venture, however, began in 1997 when he and his wife at the time, Kathy Bowman, gave birth to their son Matthew. For Larry, this was an introduction of joy into his life that he didn’t realize was missing and was beyond compare. Even after he and Kathy divorced, Larry poured every ounce of love he could into the raising of his child. Larry took Matthew on many fishing trips and helped him to develop a passion for sport, particularly baseball. Just like Larry did in his youth, Matthew has used that passion and talent to begin to change the world around him for the better.

Larry Gray was a surfer, a conservationist, an athlete, an artist, and an iconic Outer Banks figure. He was a brother, a son, an uncle, a mentor, a friend, and a father. He was a man who loved the world around him and worked his entire life to make it better for us all. He was, according to his sister Julie, “a bridge among people… well traveled, well lived, well loved, and generously given.”

One of the last things Larry said was an offer of advice: “Enjoy these days… make sure you remember and put it in your ‘memory banks.’” We will, Larry. Saying you will be missed is an understatement of epic proportions but those of us left behind can take some small comfort knowing that you have finally found peace. May tight lines and head-high waves find you in eternity.

Larry was preceded in death by his parents, Walter and Estelle Gray. He is survived by his son Matthew, his ex-wife Kathy, daughter-in-law Ashley, his siblings Walter, Tony, Julie, and Ronnie, his nieces and nephews Owen, Jenna, Dalen, William, Patrick, Rachel, and Kelsey, and by all those who knew and loved him. A celebration of his life for family and friends will be held at a future date. In lieu of flowers, the family asks that you make donations in Larry’s name to either all or one of the following: the College of the Albemarle, the Nature Conservancy Nags Head Woods Preserve, and the Surfrider Foundation Outer Banks Chapter.