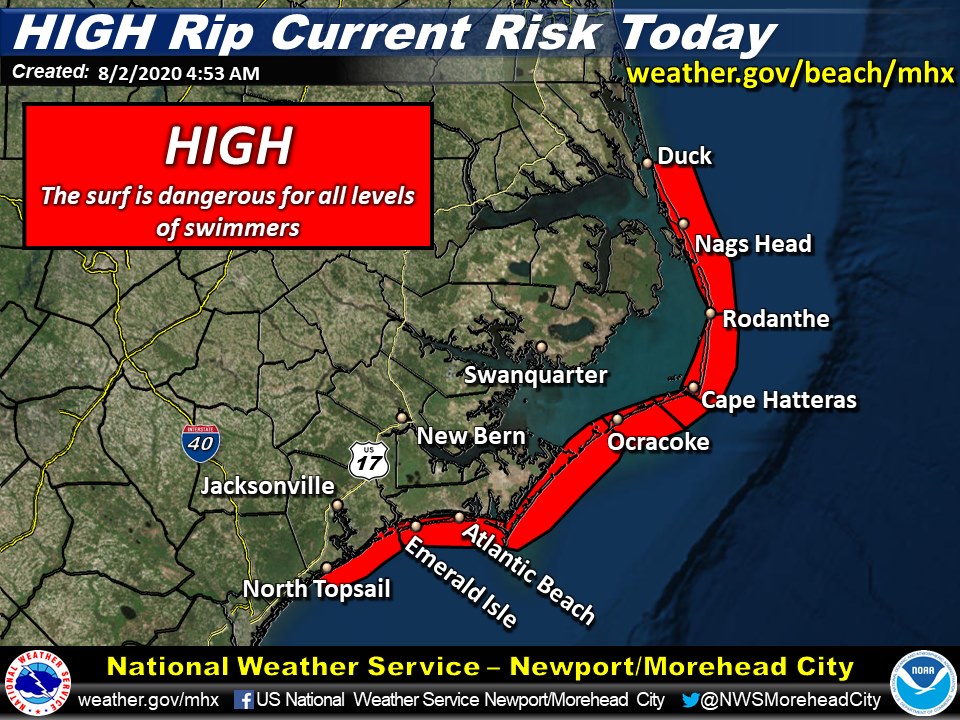 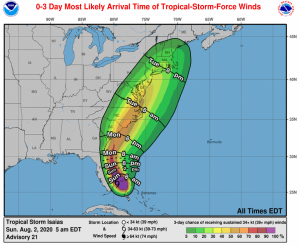 NOAA advises that interests elsewhere along the southeast and mid-Atlantic coasts of the United States should monitor the progress of Isaias. Additional watches or warnings may be required later Sunday.

Tropical storm conditions will continue over portions of the Northwestern Bahamas through Sunday morning and spread northward along the coast of Florida within the warning area through Sunday night. These conditions are expected to spread northward along the coasts of Georgia and South Carolina within the warning area on Monday. Tropical storm conditions are possible in the watch area in South and North Carolina beginning Monday night and Tuesday. 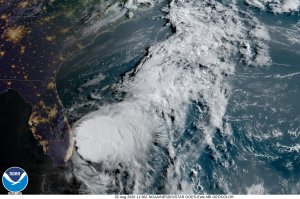 NOAA advises that the combination of storm surge and the tide will cause normally dry areas near the coast to be flooded by rising waters moving inland from the shoreline. The water could reach the following heights above ground somewhere in the indicated areas if the peak surge occurs at the time of high tide:
– North Miami Beach, Fla. to Jupiter Inlet, Fla. 1-3 ft.
– Jupiter Inlet, Fla. to Ponte Vedra Beach, Fla. 2-4 ft.
– Ponte Vedra Beach, Fla. to Edisto Beach, SC 1-3 ft.
– Edisto Beach, SC to Cape Fear, NC 2-4 ft.

At 8 a.m. EDT Sunday, August 2, the center of Tropical Storm Isaias was located about 40 miles (70 km) east-southeast of W. Palm Beach, Fla. and about 155 miles (245 km) south-southeast of Cape Canaveral, Fla. It’s moving toward the northwest near 8 mph (13 km/h). A general northwestward motion is expected today, followed by a north-northwestward motion tonight. A turn toward the north and north-northeast is anticipated on Monday and Tuesday with an increase in forward speed. On the forecast track, the center of Isaias will move near or over the east coast of Florida Sunday. On Monday and Tuesday, the center of Isaias is expected move from offshore of the coast of Georgia into the southern mid-Atlantic states.

Reports from an Air Force Reserve Hurricane Hunter aircraft indicated that the maximum sustained winds remain near 65 mph (100 km/h) with higher gusts. Tropical-storm-force winds extend outward up to 115 miles (185 km) from the center. Early Sunday morning, a wind gust to 55 mph (89 km/h) was reported at Freeport, Grand Bahama Island and a Weatherflow observing site at Junno Beach Pier, Florida measured a wind gust to 47 mph (76 km/h). Little change in strength is expected during the next couple of days, stated the NHC update.

The next complete advisory will be issued by NHC at 11 a.m. EDT Sunday: www.hurricanes.gov.

Isaias weakens; may strengthen on path to virus-hit Florida