The Outer Banks: Preparing for Isaias 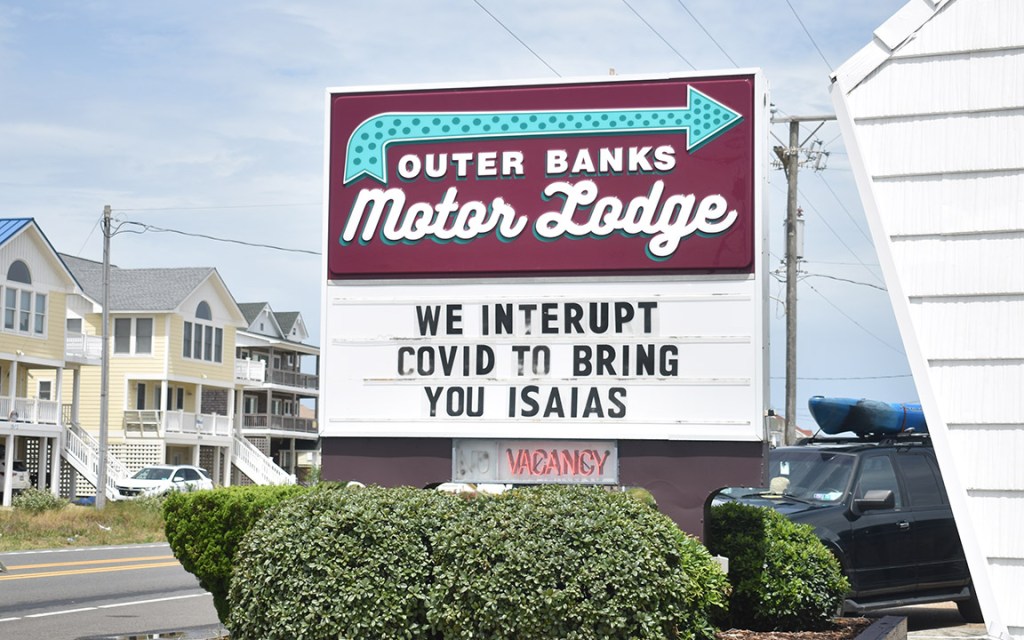 Outer Banks Motor Lodge humorously conveys what most have had to prepare for: a hurricane in the midst of a pandemic. Danielle Puleo photo

With the advancing Tropical Storm Isaias on its way, residents, property owners, business owners and visitors alike have been preparing for potential heavy winds, rain and storm surge along with strong rip currents and, perhaps, a couple days indoors.

A mandatory evacuation for Hatteras Island was ordered on August 1 in response to the tropical storm. Avon resident Pat Weston, who also serves on the Outer Banks Tourism Bureau, said her community has been preparing.

“A lot of neighbors have already moved their vehicles to higher ground,” Weston shared with The Coastland Times. No stranger to the strong storms that Hatteras Island has endured, Weston said many of the residents prepare for hurricanes throughout the year.

“Most year-round residents stockpile stuff all year long,” she said. Stocking up on supplies such as flashlights, batteries, candles and battery-powered radios is second nature to those that have been through hurricanes before. Weston said that it’s more of a “sit and wait” process when a storm is on the horizon, but it is always better to be prepared.

Gabriel Cohen, who is currently overseeing operations at OBX Beach Shop in Kitty Hawk, said he will start to bring everything indoors once the clouds roll in. “We just prepare to close when it starts,” he told The Coastland Times. “We put all the merchandise inside and close everything up.”

Teresa Magnanelli, owner of Island Art Supply and next-door business neighbor to Cohen, said she will also begin to take the chairs and outdoor supplies inside as the storm starts to visit the coast. “We just make sure nothing is left outside,” she said.

Where Cohen spoke to how he has heard complaints from some business owners about the evacuations affecting business, Magnanelli said its always better to be safe than sorry. She added that there has been an influx of people to her shop, grabbing supplies before the storm hits.

“People have been coming in a lot to get art supplies,” she said. Magnanelli explained that, especially through the pandemic, customers have stocked up on materials for their indoor projects and hobbies to suffice for the lack of time outside. Hurricanes and tropical storms tend to bring the same wave of people.

As for the visitors who were not evacuated, realty companies have already been in constant communication with their renters, making sure houses are locked down before Isaias makes an appearance.

Kathy Bradbury, a Pennsylvania native who is currently vacationing in Corolla with her family, said her vacation rental company, Outer Beaches Realty, has already spoken with the family several times since their arrival on Sunday.

“They asked us to secure any loose items, chairs on decks, bring in the trashcan to covered places and move our cars to higher ground if we’re in an area that floods,” Bradbury said. She shared that Outer Beaches had asked the family to secure the doors once the tropical storm hits to ensure safety. These measures are typical for all area realty companies, to make sure all renters are prepared.

As of 6 p.m. on Monday, the forecast for Isaias remains on track and the National Weather Service in Newport reminds those in the storm’s path to keep phones charged and have multiple ways to receive warnings before going to sleep. NWS anticipates impacts including strong winds, heavy rain and storm surge with the possibility of tornadoes throughout eastern North Carolina.

Isaias expected to make landfall Monday night as a…