Cecilia Cortez motors through her morning swim routine with determination, power and grace. She’s getting set to return to Johns Hopkins University in Baltimore where she’s a member of the varsity swim team.

Just like hundreds and thousands of other rising college sophomores in Dare County and across North Carolina, respectively, Cortez isn’t too sure what she’ll find back at school given how abruptly her second freshman semester ended last school year due to COVID 19.

But for now, she keeps pushing hard. Cortez said she’s fueled by her life-long love for both swimming and competition. The pair motivate her to hit the pool early daily.

“It’s my love for the sport and I just want to be the best at what I do,” she said.

Both of these races entail sprinting four lengths of the 25-yard long pool, which makes starts and turns critical, she noted.

Cortez said her coach Scott Armstrong taught her some important strategies as soon as she arrived last August.

“Turns are important, it’s pretty interesting, your goal is to do more underwater than doing the stroke [at the surface],” she said. “Coach threw me in the ‘underwaters’ when I first got there.”

Next came daily practices, hours of swimming to condition the athletes all September before entering the official season in October, Cortez noted. The longest of all sports, swimming lasts into March.

Even with all the coaching and swim practices, it’s her consistent mindset that reveals another reason why she’s successful in the demanding sport.

“It’s all out from the get-go!” Cortez said with a grin. She’s definitely fast and gets to the wall quickly.

In general, being on the swim team has given her a sense of belonging at Hopkins and Cortez spends most of her time with teammates when school is in session.

They study in a “swimmer’s area” of the library and eat meals together carried out from Charles Street Market or simply “Char Mar,” as they call it.

“The boys’ and girls’ teams practice at the same time,” Cortez said, “so our team is like a family.”

And they’re pretty good too. Just ask the William & Mary coach. He was left speechless in a television interview last season, Cortez said, when a dual meet came down to the final relay and her D-3 Blue Jays defeated the D-1 Tribe squad.

In that meet, her career debut, Cortez placed second in 100 back. Her personal best time came in mid-December; a blistering 55.72 seconds in the starting leg of a medley relay. During her senior year at First Flight High School, her best-ever time was 56.9.

“We’re a D-3 swimming team competing against mostly D-1 schools like Navy and the Ivies,” she said. “We have 45-ish swimming, so we’re small. We swam against Navy – they crushed us.”

In general, she’s pleased to contribute to the Blue Jays team. Cortez didn’t want to just be hanging around the pool deck at a larger university.

“I didn’t want to have to compete to swim – I just wanted to swim,” she said. So, against the Ivy League teams and others, Cortez may swim her two top events and then a leg on the medley or free relay or both.

With her broad shoulders and muscular build, Cortez just keeps swimming down and back at a rapid pace each day. She practices the “underwaters” to perfect her technique and perhaps gain more length.

Last year, as a freshman at Hopkins, she had qualified to compete with her team in the NCAA competition in mid-March right when school was dismissed for the coronavirus.

By making great grades – all As – and qualifying for the NCAAs in swimming, Cortez was named an Academic All American. She also excelled as a student, athlete at First Flight where she graduated in 2019.

At times, her mom Laura swims in the next lane at the beautiful, clean outdoor pool at Westside Athletic Club in lower Currituck.

“Oh, it’s so fun and gives me a little more inspiration,” Cecilia said. “It’s very fun to have my mom out there!”

She said they push each other and sometimes embrace that “last one, fast one,” mentality just like her teammates at school. The other day, Cecilia’s younger brother Ben was there, too. 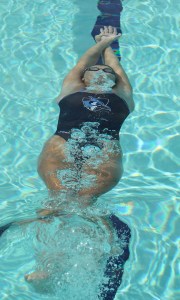 With her hands interlocked above her head, Cecilia works on lengthening her underwater time at the start of a backstroke lap. Daryl Law photo

They play an old school game where she gives him a huge lead and then they race it out to see who can touch the wall first.

Cecilia, Laura and Ben have all worked out at Westside this summer as well as the Outer Banks Family YMCA in Nags Head, where Cecilia also lifeguards.

She’s taken courses online this summer and she was swimming hard on a recent Monday trying to shake off stress from writing papers and exams.

During the stay-at-home months this spring when area pools were closed, it was the longest time period she had gone without swimming laps. Cecilia tried running, but didn’t like it.

As for her career choice, she wants to keep her options open and not be boxed in.

“I’m on the pre-health track,” Cecilia said. “I don’t know exactly what I’m going to do.”

She thoroughly enjoyed a recent genetics class. “The human body, it just blows my mind!”

Molecular biology is next.

“That should be pretty fun!” Cecilia said.

“I definitely liked butterfly since I was a little,” she said. “It always just came easy to me.

Outer Banks Pest Control: Carrying on a promise to…