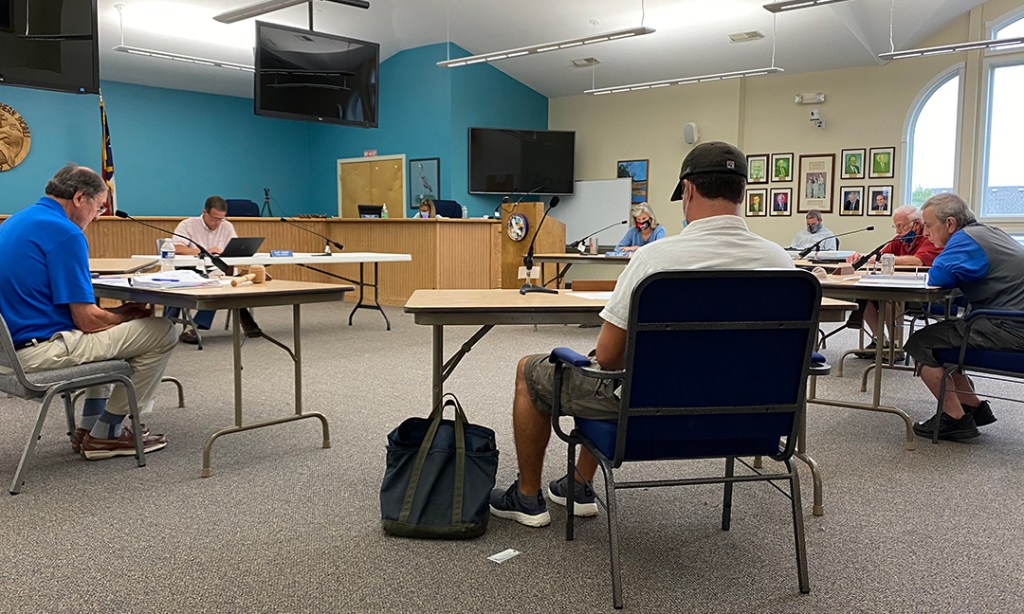 Around 2 p.m. on Monday, August 3, Southern Shores notified the public of an emergency meeting to be held that same day at 4 p.m.

Only two agenda items made it to the table as the council members sat down in the Pitts Center with town manager Cliff Ogburn, planning director Wes Haskett and town clerk Sheila Kane.

The first was a proposed contract renewal with Thompson Consulting Services for storm debris monitoring. Ogburn said this would be the second contract Southern Shores would sign with Thompson, the first having expired after three years in June.

“Dare County sent out a request for proposals for debris monitoring in the spring,” Ogburn shared, “and Thompson again was the lowest bidder.” He requested that council approve to authorize Mayor Tom Bennett’s signature on an interlocal agreement between the town and the county to allow execution of the proposed contract with Thompson.

“The town has to be under contract in order to get any reimbursement after a declared storm,” Ogburn explained. Reimbursement can come from FEMA for debris removal as well as debris monitoring; both must be big according to federal procurement guidelines.

The interlocal agreement would allow the town to “piggyback” with the county for debris monitoring. Monitoring ensures that accumulated debris in the town did, in fact, come from the town after a major storm, such as a hurricane.

“As for the timing of this, hopefully, we won’t need to execute this in the near future or throughout the rest of the hurricane season,” Ogburn said. “But being on the absolute safest side to make sure you’re covering the town and eligible for reimbursement, should an event arise, we felt like we needed to ask you to authorize this now.”

Mayor Pro Tem Elizabeth Morey asked if the town had experienced any issues with Thompson in the past. “With Dorian, they were responsive to whenever we had issues arise,” said Haskett. “They were very hasty and easy to contact and communicate with. I think it’d be good to team up with them.”

Councilman Matt Neal moved to approve the contract renewal with Thompson and Morey moved to authorize Bennett’s signature on the interlocal agreement between Southern Shores and Dare County. All council members were in favor of both motions and they were passed unanimously.

The last order of business before the board was to cancel the regular council meeting scheduled for August 4. Conners moved to move all other agenda items to the next meeting, which will take place on August 18 at 9 a.m. in the Pitts Center. Again, all were in favor.