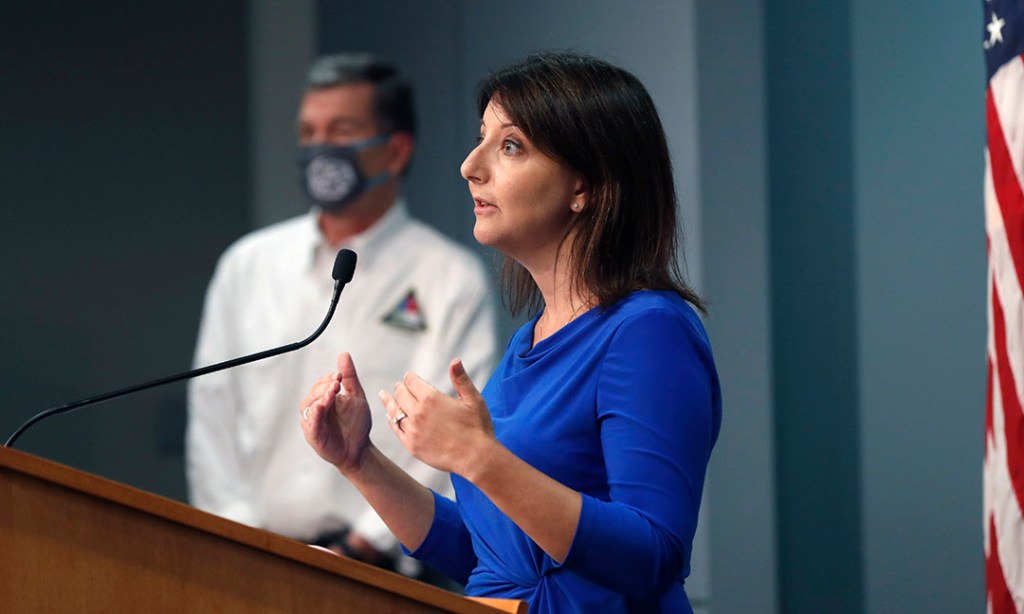 Dr. Mandy Cohen, secretary of the state Department of Health and Human Services, answers a question during a briefing at the Emergency Operations Center in Raleigh, N.C., Wednesday, August 5, 2020. Courtesy NCDPS

North Carolina overcounted its tally of completed coronavirus tests by 200,000 since the start of the pandemic, state officials announced Wednesday, blaming most of the error on a processing lab. The error doesn’t affect key measures such as the percentage of positive test results, they said.

Mandy Cohen, secretary of the state’s Department of Health and Human Services, pinned the brunt of the blame on LabCorp Diagnostics for providing North Carolina with two different daily testing count numbers when the clinical lab network submitted the data electronically and manually.

“The positive cases are reported electronically,” Cohen said in an interview. “Those continue to be accurate. The number that we are correcting today is just the total cumulative lab tests.”

A news release from state health officials said the overall tally of completed tests is collected in a different manner from data used to count positive cases and the percentage of tests that are positive. The completed test tally has been based on aggregate numbers provided by labs, while positive cases are tallied using data collected at the individual patient level.

Cohen said the health department discovered the error in the completed test count when reviewing ways to improve the state’s data collection process and ongoing efforts to transition to a more automated counting system.

“Our team found this as we were doing process improvement,” Cohen said. “I certainly wish we would’ve done that process improvement earlier, right? And then we would’ve caught this earlier. I think we own that in not catching this as soon as we could. Certainly LabCorp owns some of this for sending us the wrong data, but we own some of it for not catching it on our end.”

An executive with LabCorp, which is based in North Carolina, acknowledged the company’s role in the discrepancy and said that some tests that originated out of state were processed in North Carolina and mistakenly included in submissions to the state health department.

“We quickly corrected the issue and provided the updated manual reports to NCDHHS,” Brian Caveney, Chief Medical Officer and President of LabCorp Diagnostics, said in a statement. “LabCorp’s daily electronically reported data was accurate and unaffected by the error, and this issue does not affect other states or any results reported to patients or their providers.”

LabCorp is one of two nationwide laboratory chains that are the backbone of coronavirus testing in the U.S. The other testing company is competitor Quest Diagnostics.

In recent weeks LabCorp has reported processing about 180,000 tests per day, or a quarter of the country’s roughly 700,000 daily testing total.

The company’s labs process test samples for hospitals, doctor’s offices, pharmacy clinics, universities and other medical providers. In addition to processing the tests, LabCorp operates a courier system to gather samples and ship them to labs of varying size in its network.

Last month both LabCorp and Quest warned that surging demand for COVID-19 tests had overwhelmed their lab capacity, leading to lag times of five days or more to return results to patients after their samples had been collected from testing sites.

LabCorp said Monday that it was delivering test results within one to three days after their pickup.