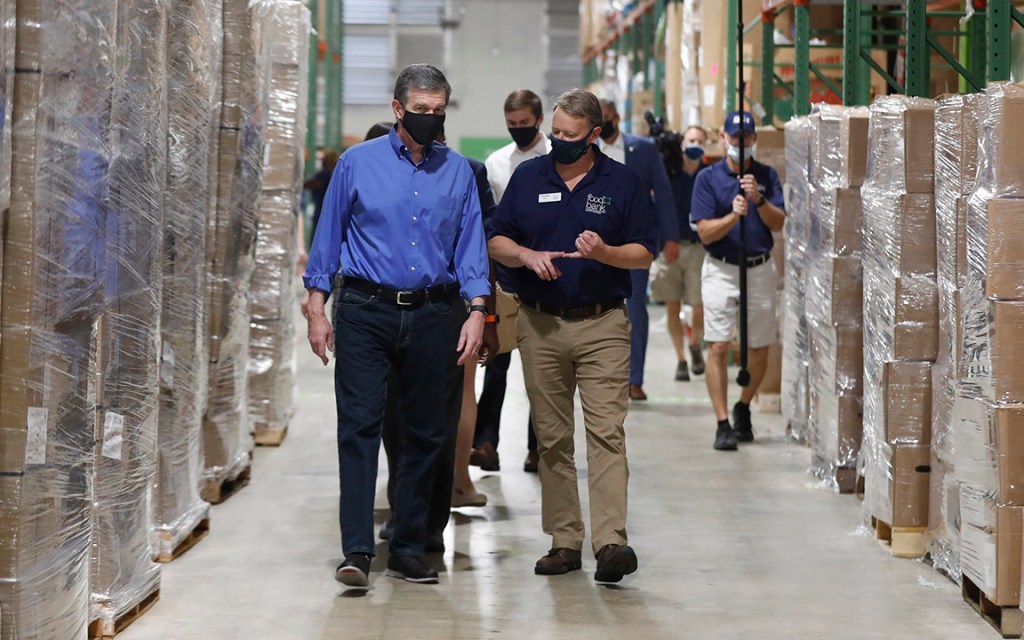 North Carolina Gov. Roy Cooper toured a food bank Thursday as food insecurity rises during the coronavirus pandemic. It was one of the governor’s few public events in recent months as the state has been under his executive orders aimed at slowing the spread of COVID-19.

North Carolina has more than 161,000 lab-confirmed cases of COVID-19, with 2.1 million completed tests. In recent weeks, universities reopening to students have accounted for many of the new cases.

Cooper told reporters at the Raleigh food bank on Thursday that it is “too early to say” if universities’ COVID-19 case clusters and closing of campuses will affect whether more K-12 schools can go back to in-person classes.

He said the universities took the action needed in order to deal with their situations, and his administration will continue to look at the numbers overall statewide.

“We very much want to continue moving forward. I’m pleased that our numbers have stabilized over the last month or so and we look forward to continuing to slow the spread, continuing to grow the economy and also trying to help people who are in need,” Cooper said.

He said it is important, as soon as they safely can, to get children back in school.

Video released by the governor’s office:

Cooper visited the Food Bank of Central & Eastern North Carolina’s location on Capital Boulevard in Raleigh, where volunteers from Elevation Church were sorting food donations in a warehouse.

Jennifer Caslin of the food bank said that food insecurity had been declining before COVID-19, but that now one in five adults and one in three children is considered food insecure. She said it is not just limited food access being away from schools, but also the economic impact on parents.

Cooper, who wore a mask as did all staff and volunteers, talked to volunteers about what they were doing and thanked them for it.

“What you guys are doing is really important,” Cooper said. “I do know that there are some relieved people that getting these (food) boxes.”

Caslin said that for the Raleigh food bank, volunteers are still enthusiastic about coming in to help at that location, where people can spread out more easily than at other branches. Donation levels are higher than pre-coronavirus, but lower than what they were receiving at the start of the pandemic.

The state legislature returns to Raleigh for a brief session on Sept. 2. The General Assembly is expected to determine how to spend the rest of the federal CARES Act funding for COVID-19 relief. Cooper laid out his budget proposal in a news conference on Wednesday.

“If there’s ever a time to give people help, it’s during a pandemic,” he said. He wants the legislature to invest in high speed internet, health care and education. His proposal includes $50 million to address food insecurity and food banks like the one he visited.

Cooper is a Democrat. The legislature is Republican-led, and lawmakers criticized parts of his proposal including cutting funding for private school vouchers, called opportunity scholarships.

Cooper said he and lawmakers thought they would have more direction from Congress on the rest of the COVID-19 spending, but they do know that they need to spend $900 million of those federal funds by Dec. 30.

Cooper said he has talked to Republican leaders personally “from time to time” over the last month, and his staff presented the budget proposal to them within the past week.

One Republican criticism of Cooper’s orders, which sparked proposed legislation, has been the closure of gyms. Cooper said Thursday that there are exceptions allowing for use of gyms, including with a doctor’s note.

Cooper said gyms’ status is one of the issues that will be examined as he and health officials get ready to make decisions about what happens after his executive order on Phase Two of reopening is scheduled to expire Sept. 11. He said the announcement would most likely come the week of the expiration date.