Kris and Ava: Journey ends on a sad note for bicyclist and canine companion 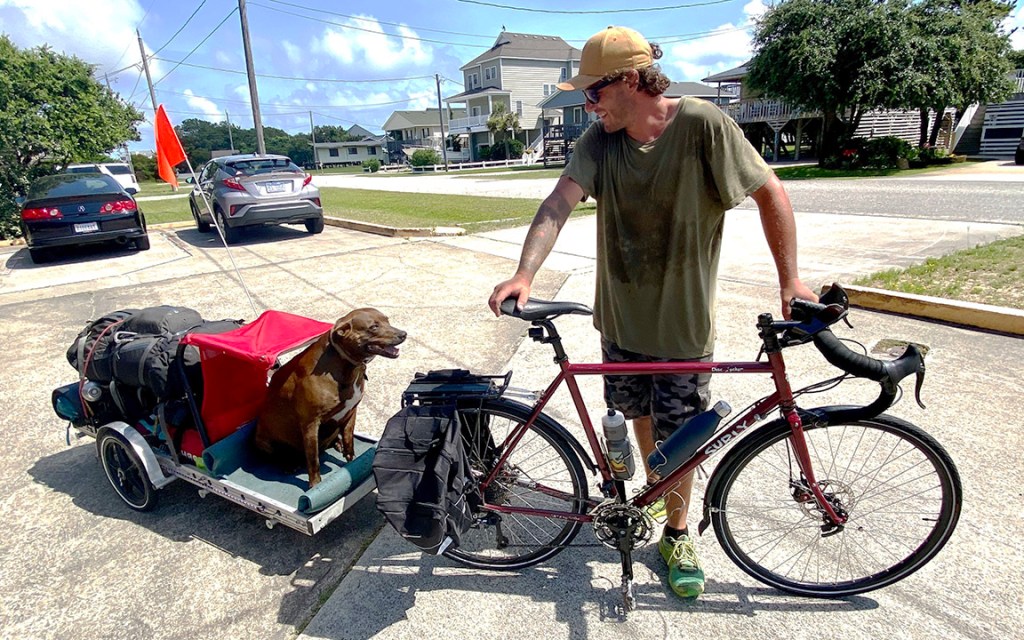 Kristopher Cotton, 36, was biking in the 7800 block of Savannah Highway near Charleston, SC around 1:45 p.m. on Monday afternoon with his dog, Ava, when both were struck by a vehicle traveling southbound.

Cotton and Ava had been making their way south on a bicycle journey from New York to the Florida Keys. Along their travels, which began in late May, the pair made a pit stop in the Outer Banks in mid-July.

According to the Charleston County Sheriff’s Office, Cotton died at the scene of the collision. The CCSO press release stated that his dog “was injured,” and the Sheriff’s Animal Control Unit “transported the dog to a veterinarian.” The incident is still under investigation by the Charleston Traffic Division.

Jenda Cotton, Cotton’s mother, told The Coastland Times that Ava suffered stomach bleeding and a broken jaw. She reportedly arrived at the emergency vet clinic in a comatose state and has undergone surgery. Jenda said the next 24 hours are “crucial.”

Linda Lacey and Meg Risha have organized a GoFundMe fundraiser to help with expenses. “The funds are going directly to Jenda Cotton,” said Lacey. “We are asking for donations to aid in bringing him home, funeral expenses and the ever-growing vet bill for his fur baby, Ava.” The “Love for Kris” page may be accessed here.

Jenda shared that she intends to travel to Charleston to bring her son and Ava “back home,” as long as she can gather the funds to do so.

As for her home community, as well as community members of all the towns and places Cotton and Ava had stopped along their journey from New York to South Carolina, Jenda said everyone has been “so amazing.”

“Ava is a people person, and she was his ambassador,” she said. “They went everywhere together, and met so many people.” Jenda said she has received many phone calls and emails from those who had met Cotton; several of which are from the Outer Banks area.

Hosted by James Stainback, owner of Bike Barn, while in Kill Devil Hills, Cotton and Ava had settled in for about a week in their first-time visit to the area.

During their time here, The Coastland Times had met with Cotton and Ava to learn more about their travels and why they had decided to go on such an adventure. “It just puts a smile on my face every day and makes other people smile and I’m loving it,” he had said.

“He really did love it,” Jenda said. “I know he was doing something that made him happy.”

Ava’s road to recovery after tragedy