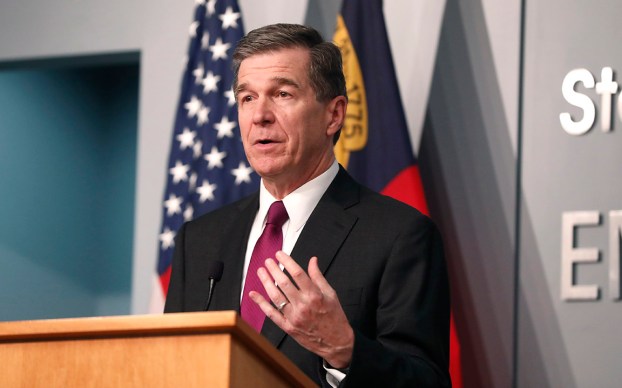 Gov. Roy Cooper answers a question during a briefing at the Emergency Operations Center in Raleigh, N.C., Wednesday, July 1, 2020.

Phase 2.5: Some COVID-19 restrictions to be lifted Friday

Because key metrics have stabilized and some are declining, Gov. Roy Cooper announced Tuesday afternoon that some restrictions will be relaxed and he is invoking Safe at Home 2.5 effective Friday, Sept. 4 at 5 p.m.

– Museums and aquariums may open at 50% capacity.

– Gyms and indoor exercise places may open at 30% capacity.

Of that total, Dare residents represent 245 cases, of which 230 have recovered and 16 remain active. Of those cases active, 14 are in home isolation and two are in isolation outside Dare County. No one is hospitalized.

Overall, non-residents represent 214 of the positive cases. Some 137 have recovered, two are in isolation in Dare County and 77 have transferred to home locations.

The Dare County update notes “This past week we saw an increase in the number of new positive cases as well as an increase in the percent of positive tests to total tests. We continue to see the majority of new cases linked to direct contact with individuals who have the virus. Close contact continues to be the predominant way we are seeing the virus spread.”

Cases in Hyde County have been inching upward.

On Wednesday, Aug. 26, Luana C. Gibbs, Hyde County health director issued an update. “Though all age groups are affected, the majority of cases are white individuals within the age group of 25 to 49.”

She also repeated this invitation for tests. “Please remember, the Health Department tests anyone who suspects they are sick with COVID-19 or has been in contact with someone who has the virus. We also test folks who request testing even without symptoms.”

In Tyrrell County as of Aug. 31, cases numbered 109 with 103 recoveries and two deaths.

Pasquotank County had 532 lab-confirmed cases of which 432 have recovered and 76 remain active. The county has suffered 24 deaths.

Hospitalizations are 946. The number of people in hospitals has hovered in the 900 range since Aug. 24. Across North Carolina, 2,741 individuals have died.

In moving to Safer at Home 2.5, the following information about metrics was shared:

“Although these numbers are still stable or declining, they remain high,” states a media release.