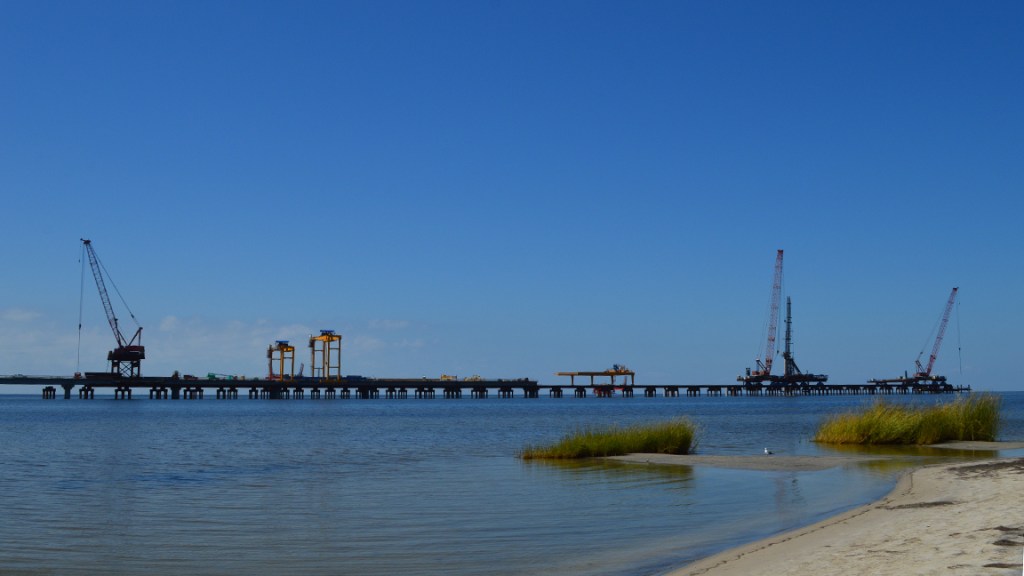 Rodanthe Bridge construction is progressing from the south. The trestle structure is almost to the end of Mirlo Beach. The bridge is 47% complete. Mary Helen Goodloe-Murphy photo

Actual construction of the Rodanthe bridge is 47% complete.

NCDOT held a virtual quarterly update meeting on bridge project, which is scheduled to open for traffic in the fall of 2021.

At the Sept. 3 meeting, resident engineer Pablo Hernandez reported that 52 of the 108 bents have been installed and 43 of 107 deck spans have been cast with concrete.

At the north end of the bridge, pile installation is challenging. Several different techniques to punch through hard pack have been tried. Currently, an auger is used to loosen soil during installation.

At the south end, road work at the roundabout is set for October. In the same month, Cape Hatteras Electric Cooperative will start Phase 1 of relocating the cooperative’s transmission lines.

The meeting started by reviewing questions from the previous meeting in June.

The Rodanthe bridge is designed to avoid the highly troubled s-curves on NC 12 immediately north of Rodanthe.

Diane Wilson, senior public involvement officer, told 21 people online that the sandbags currently installed along NC 12 in the refuge will be removed, as required by the CAMA permit. Sandbags in front of some houses in Mirlo Beach will not be removed.

When the bridge is finished, the 1.8 miles of NC 12 pavement will be removed and the easement returned to Pea Island National Wildlife Refuge. NCDOT is required to make the abandoned area similar to its surroundings.

NC 12 will be maintained by NCDOT from the roundabout to just north of Green Lantern Court, or 33 feet south of the refuge boundary. NCDOT does not intend to install dunes at the end of NC 12.

No parking is planned for the southern end of the bridge. A parking lot will be constructed one-half mile north of the new bridge.

The Sept. 3 meeting was recorded. NCDOT will post the recording and up-to-date photos on ncdot.gov/projects/nc-12-rodanthe.

The incident is under investigation by the U.S. Department of Labor’s Occupation Safety and Health Administration. The field investigation was completed and work at both ends of the bridge project resumed Friday, Aug. 28. The investigation remains open.

The major bridge project in Oregon Inlet is not quite finished. Contractor PCL Civil Constructors continues to demolish the old Bonner bridge. About 20% of the structure remains.

Originally, all of the debris was to be dumped at four artificial reefs, three north of Oregon Inlet. One reef south of the inlet was to receive 55% of the debris. However, the bar at Oregon Inlet shoaled to a depth not navigable by the tugboats managing the debris-filled barges.

NCDOT requested permission to dump debris in reefs opposite Carteret County. Despite the objection of the Dare County Board of Commissioners, NCDOT was granted the right to deposit debris opposite Ocracoke Inlet at Reefs 250 and 255, and opposite Beaufort Inlet at Reefs 320 and 340.

Owens: Time to get serious about affordable housing