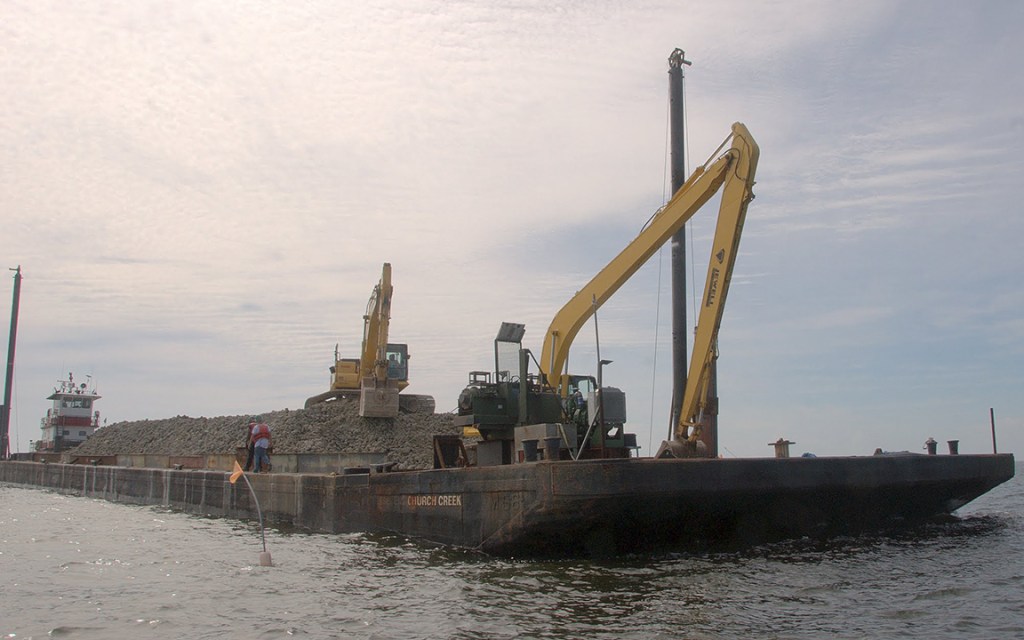 Baby oysters and many coastal species will soon have a new home in the Pamlico Sound. The North Carolina Coastal Federation, in partnership with the N.C. Division of Marine Fisheries, has been recommended for funding from the National Oceanic and Atmospheric Administration to add 15 acres of new oyster reef habitat in Pamlico Sound.

This large-scale, $2,250,000 project expands on the state’s investment in oyster restoration and will benefit not only oysters but also coastal species such as gag grouper and white, brown and pink shrimp.

Project partners will use proven construction practices to build these additional oyster reefs in the Pamlico Sound, targeting the addition of five acres per year over the next three years for a total of 15 acres.

Year one construction will add five acres of reef material to the Swan Island sanctuary. Additional sites for subsequent reef construction will be selected based on input from the public, coupled with the best science available and logistical considerations.

Building new oyster reefs is a strategy that is laid out in the North Carolina Oyster Blueprint. Since 2003, the federation has been leading efforts of a diverse group of stakeholders involved in growing, harvesting, studying, educating, managing and eating oysters. Collectively, the group has worked together to protect and restore North Carolina’s oyster habitats and fisheries by implementing strategies outlined in the Blueprint. The five-year blueprint is currently being updated and the ultimate goal is to ensure North Carolina becomes the Napa Valley of Oysters, according to NCCF.

“We’ve made tremendous progress on sanctuaries through this partnership between NOAA, the state and private contractors in the past three years. We are excited to see the work continue,” said Erin Fleckenstein, NCCF scientist. “The sanctuaries have proven to be a valuable strategy for building back oyster reefs in our coastal waters, boasting ten times more oysters than other reef types.”

One acre of oyster sanctuary supports nearly one million oysters in Pamlico Sound, according to NCCF. Oyster sanctuaries make up approximately 6% of all oyster reefs in Pamlico Sound, but contribute nearly 40% of the oyster population. “They produce baby oysters that “seed” harvestable reefs and serve as an insurance policy for the sound’s oyster population in the face of man-made or natural disasters,” states NCCF. “Building oyster reefs is a critical element in the strategy of building back oyster populations in North Carolina, which also includes cultch planting for wild harvest, patch reefs and living shorelines.”

The federation, division and partners have worked successfully to increase oyster habitat over the past several years, including projects funded by an American Reinvestment and Recovery Act (ARRA) grant and a subsequent three-year NOAA grant 2017-19. In 2015, the state legislature decreed that a 500-acre oyster sanctuary network be built in memory of Senator Jean Preston. Currently, the network has developed 357 acres, or 72% of the total. NOAA funding has partnered in the construction of 95 of the 357 acres to date. This project would add 15 acres, making the total 372 acres, or ~75% of the total sanctuary goal.

“Throughout our long-standing partnership, the North Carolina Coastal Federation has been instrumental in restoring oyster reef habitat in Pamlico Sound and beyond,” said Carrie Selberg Robinson, director of the NOAA Fisheries Office of Habitat Conservation. “NOAA is dedicated to advancing this critical work and strengthening the fisheries, ecosystems and communities these oyster reefs will support.”

This project builds upon the momentum generated by the multi-decade successful partnerships among the federation, the division, NOAA, multiple other state and federal agencies, three universities, fishermen, farmers, barge operators, truckers, construction workers and others. Partners will use proven logistical and construction processes fine-tuned by similar successful oyster restoration to provide ecosystem-scale habitat for target species.