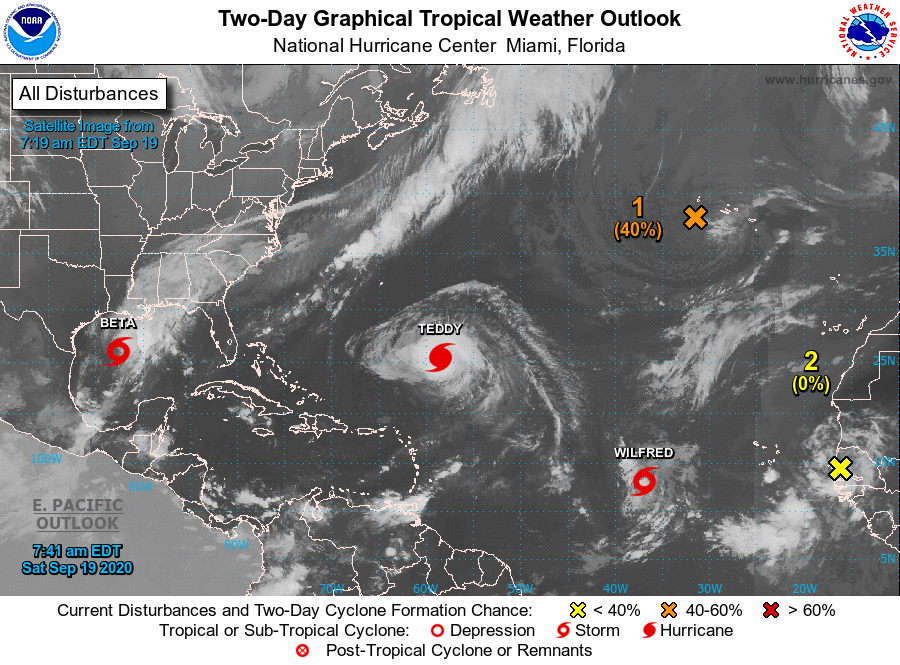 The Atlantic’s record-breaking “crazy” hurricane season got a bizarre European remake Friday as forecasters ran out of traditional names and trotted out the Greek alphabet for subtropical storm Alpha. And the geographically misplaced storm promptly sloshed ashore in Portugal.

This is only the second time National Hurricane Center forecasters have had to pull out the Greek alphabet for names, with the last time being 2005. Tropical Storm Wilfred, the last of traditional names, officially formed little more than an hour before Alpha, prompting the hurricane center to tweet “get out the Greek alphabet.”

And they quickly had to use it again, when a tropical depression in the western Gulf of Mexico became Tropical Storm Beta. That’s three storms forming in about six hours.

“It’s crazy,” said University of Miami hurricane researcher Brian McNoldy. “This is just off the charts., We’ve made a joke of breaking records.”

Alpha is odd in another way. It’s misplaced into an area where storms don’t generally brew. That’s so unusual that Alpha barely shows up on the hurricane center’s real time storm tracking map, which is focused on the Americas. Only the “Al” of its Greek name shows and it was expected to dissipate in less than a day.

But Alpha fits with the rest of this season in another way. About half of the storms this busy hurricane season have only lasted a few days and have been quite weak, McNoldy said. Vicky for example popped up quickly and soon dissipated without much notice. And with 22 storms only two of them — Laura and Teddy, which is still swirling — reached major hurricane status, which is also kind of unusual, McNoldy said.

McNoldy said the environmental conditions reduce high level winds enough for storms to form, but not enough for them to strengthen or even survive long. La Nina, which is a cooling of parts of the equatorial Pacific that changes weather worldwide, is a factor in making some but not all of the Atlantic more active, he said. It doesn’t explain Alpha forming, he said.

McNoldy does not see a human-caused climate change connection at work in the number of storms.

Just to remind people, the hurricane center tweeted out the entire 24-letter Greek alphabet, with a red slash through Alpha. McNoldy joked that after that there’s no official name list, but the Russian alphabet is available.

With at least another month of the heart of the busiest part of hurricane season to go, one weather-watcher on Twitter talked of “Hurricane Pi on Thanksgiving.”