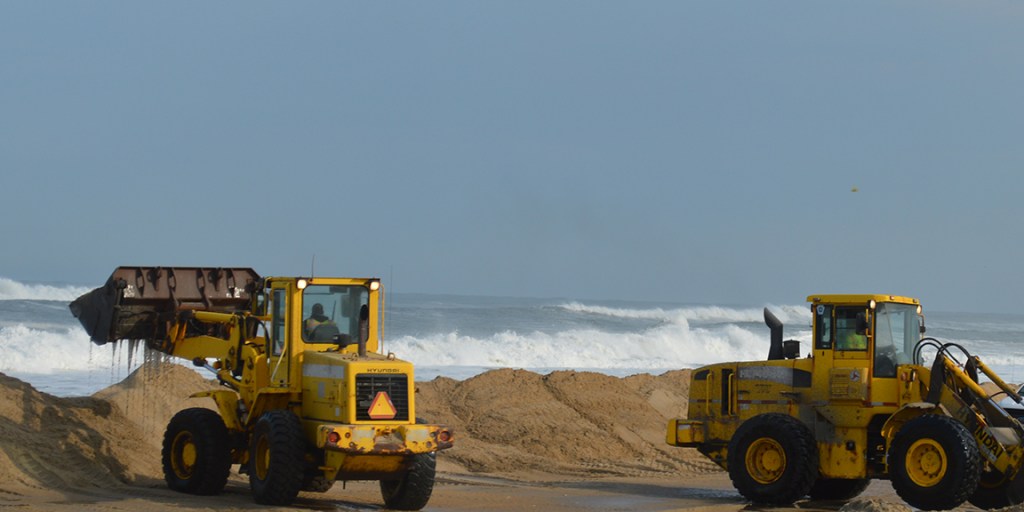 At the infamous NC 12 S-turns north of Rodanthe, four NCDOT equipment operators shove sand back on the berm while large breakers hit the shore on Wednesday, September 23 around 5 p.m. Mary Helen Goodloe-Murphy photo

At the S-curves, barely visible fog and center lines direct vehicles. NCDOT crews were at work with four pieces of equipment. 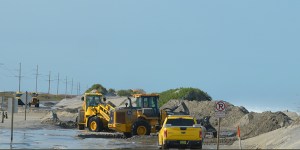 Once at the northern entrance to the new Rodanthe bridge, NC 12 is mostly clear and dry. Some overwash water pushes onto the pavement, particularly around the New Inlet walkover.

Seawater did cross under the Richard Etheridge Bridge, but the road is clear until just before the Pea Island Visitor Center.

On Wednesday afternoon, driving the 5-ton truck was Tim Fitch, with Fire Chief Mike Daughtery riding along side. At the request of Dare Emergency Medical Services, the pair was checking the road condition to see if Dare County ambulances could make medical runs. 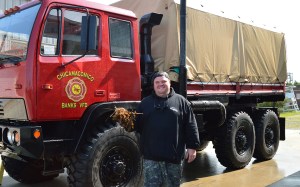 Chicamacomico Banks Volunteer Fire and Rescue 5-ton military transport vehicle has served as an emergency ambulance during the NC 12 closure in Pea Island National Wildlife Refuge. Tim Fitch, shown with a handful of seaweed, helped Fire Chief Mike Daugherty wash sand off the truck Wednesday afternoon, Sept. 23. Volunteers Daughtery, Fitch, Ben Abe, Craig Detsch, Chris Cowan and Clyde Thompson have driven or ridden in the powerful truck during five or six emergency medical runs, three trips for the Dare County Sheriff, one humanitarian pickup and shuttles for Emergency Medical Personnel as of Wednesday afternoon. The truck was purchased this spring for $30,000. It has three axles and is six-wheel drive. Deep spots along NC 12 had three and half feet of water were easily handled by the big truck. Mary Helen Goodloe-Murphy photo 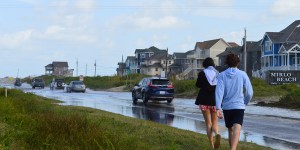 NC 12 overwash at the S-turns and northern Rodanthe starts on Sunday morning, Sept. 20. NC 12 was closed for the first time a few moments after the photograph was made. The road reopened at 5 p.m. It took 50 minutes for the northbound vehicle line to clear. Sunday night, the road was closed. As of Wednesday afternoon, Sept. 23, it is scheduled to reopen at Noon on Thursday. Mary Helen Goodloe-Murphy photo

Pasquotank County man ‘nearly fell out’ of his truck…