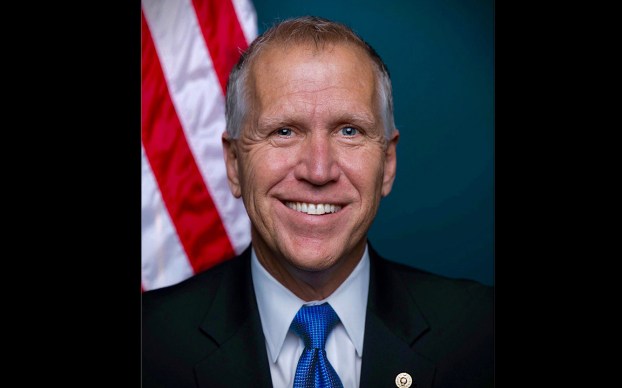 U.S. Sen. Thom Tillis of North Carolina announced Friday that he has tested positive for COVID-19, but says he has no symptoms.

The Republican’s office issued a statement saying that a rapid antigen test Friday came back positive. Tillis said he undergoes testing regularly and had tested negative as recently as last Saturday.

Tillis is the latest person to be diagnosed with the virus after attending the Supreme Court nomination ceremony in the White House Rose Garden for Amy Coney Barrett. Tillis was wearing a mask at the ceremony.

He is the second member of the Senate Judiciary Committee to test positive. Just a few hours earlier, Republican Sen. Mike Lee of Utah announced that he, too, is infected.

A spokesman for Tillis didn’t immediately respond to an email Friday night asking if the senator had recently been in close proximity to President Donald Trump, who was hospitalized after testing positive for the virus.

Tillis said in the statement that he’s going to isolate for 10 days and is reaching out to those he’s been in contact with.

“Thankfully, I have no symptoms and I feel well. As we all know, COVID-19 is a very contagious and deadly virus, especially because many carriers are asymptomatic,” he said at the time.

A Saturday update from Tillis’s office states the senator “continues to self-isolate at home in North Carolina and has mild symptoms, no fever, and he is in great spirits. Thom and his wife Susan are grateful for the prayers and well wishes they’ve received from North Carolinians.”

In a close race for re-election, Tillis is suspending in-person campaign events and temporarily closing his Charlotte campaign office, the campaign said in a news release. Campaign staff who have come into contact with Tillis will quarantine and receive virus tests.

Tillis has supported mask-wearing. He was among the small minority of attendees at a Trump rally in Winston-Salem seen wearing a mask on Sept. 8. He’s also routinely seen on Capitol Hill wearing a mask.

Tillis’ opponent in the Senate race, Democrat Cal Cunningham, said on Twitter that he would get tested himself after the two men shared a stage Thursday for their third  Senate debate. They were photographed greeting each other by bumping elbows at the outset of the event.

“I’m wishing @SenThomTillis a quick recovery following his positive COVID-19 test, and am thinking of him and his family,” Cunningham said in a tweet.

North Carolina Gov. Roy Cooper, a Democrat, also tweeted that he is praying for a quick recovery for Tillis.