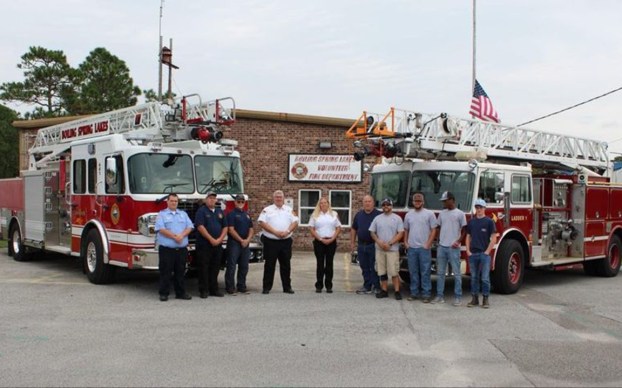 Swan Quarter, the county seat of Hyde County, is not known for its sky-scrapers. The tallest building is probably the Hyde County Government Center, built in 2007, with two stories over a ground level parking garage. There are several older two-story homes with tall attics that have been elevated to mitigate the flood waters of the nearby Pamlico Sound, but that is about the extent of any towering structures in this rural fishing village. Regardless, the members of the Swan Quarter Volunteer Fire Department (SQVFD) have long felt the need for a ladder truck “just in case.”

“We felt if there was ever a need, and we could save even one life with a ladder truck, it would be worthwhile,” Fire Chief Jeffrey Stotesberry said. “Even in rural Hyde County, there could be other opportunities to put a ladder truck to use. Our department is already trained and equipped for an agri-rescue such as a grain bin extraction. Having a ladder truck that would reach the top of a grain bin would certainly be a plus. And we frequently are called to accidents where a vehicle has gone in a deep ditch alongside our roadways. A ladder truck would provide a stable platform to reach and work such incidents.” 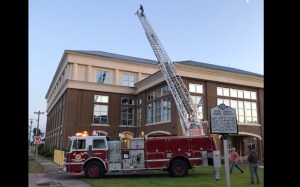 For the past few years, Stotesberry had been regularly checking online government surplus websites and auctions looking for an affordable used ladder truck. “Recently, I finally found a truck that seemed to fit our needs, but we just didn’t have the funds to bid on it,” he explained.

He kept a close eye on the truck and, as the auction ended, he saw that there were no bids for the truck. At that point, he decided to take a chance and ask the owner – a volunteer fire department in Brunswick County – if they might be in a position to donate the truck to the SQVFD. And on September 19, the SQVFD’s dream came true when they were gifted a 1987 Simon-Duplex LTI ladder truck by the Boiling Spring Lakes Volunteer Fire Department (BSLVFD).

BSLVFD Chief Theresa Tickle reports “We attempted the sell this truck for the amount offered by the scrap yard ($5,000), but were unsuccessful. When Chief Stotesberry contacted us about donating the truck to them, our members and our board of directors all agreed that the truck would serve a greater purpose if we donated it to the Swan Quarter Fire Department. We are also a nonprofit volunteer fire department and we’ve had donations in the past that have helped us – so we feel good being able to help another department in need.”

Stotesberry and four other members of the SQVFD made the roundtrip drive to Southport and according to Stotesberry, they not only came home with the ladder truck, but even more importantly, they came back feeling that they had met some good people who they were now able to call their friends. The SQVFD contingent was impressed with the way that many of the BSLVFD’s officers, board members and others were present to meet them. “Even some of the local law enforcement personnel, emergency medical personnel, the fire chief from a neighboring fire department and people from the community were there,” Stotesberry said.

“These people showed what all communities should do – they worked together, supported each other and their local volunteer fire department, and welcomed us at the same time. We left feeling like we had made some life-long friendships and we specifically want to thank Chief Tickle for making all of this happen,” stated Stotesberry.

The SQVFD was established in 1971 by a group of citizens who were concerned with providing an organized fire safety presence for the community. Since that time, their area of operation has expanded, as has the level of services they provide. Today they operate with nineteen unpaid volunteers who provide not only fire incident response, but also first responder service for medical emergencies. They also work with the Hyde County Schools to provide fire safety awareness to the youth of the community. They are a recognized nonprofit entity by the Internal Revenue Service and donations to the Swan Quarter Volunteer Fire Department are tax-deductible to the extent allowed by Law. Visit https://www.facebook.com/Swan-Quarter-VFD-104335134460420 or www.swanquaratervfd.org  for more information.