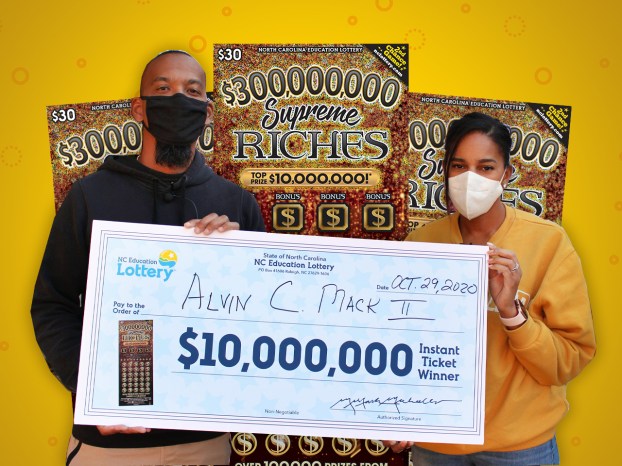 Retired Marine Master Sergeant Alvin Mack II of Jacksonville plans to use a $10 million lottery prize to keep his son’s memory alive by giving back to his community and helping a foundation that supported his family in their time of need.

In May of this year, Alvin Mack II retired from the military. That same month, he also lost 19-year-old son Alvin Mack III, who served in the Air Force Honor Guard at Arlington Cemetery.

“He was my only son and he meant so much to me,” he said. “I’ve always been a believer of luck, but in this case, I just felt like it was a little bit more than that.”

Mack, who served in the Marine Corps for 20 years, purchased his winning $30 Supreme Riches ticket from Publix on Marlin Drive in Jacksonville.

“I have a tribute room dedicated to my son and I sat with him last night and I just told him, ‘Is there anything you want me to do? And I’ll do it,’” recalled Mack. “I believe this is truly a blessing from my son.”

“When I got the word of my son’s passing, I wasn’t financially stable enough to pick up all the costs that were involved,” said Mack. “The Fisher House Foundation donated housing for me and my family to stay during that time. My plan for this money is to donate to the Fisher House Foundation and continue to help others as I can, in my son’s name.”

Mack and his wife also hope to start a scholarship fund for student-athletes to honor their son, who was a former football quarterback in high school.

For details on how money raised by the lottery made a difference in 2019, visit www.nclottery.com and click on the “Impact” section.