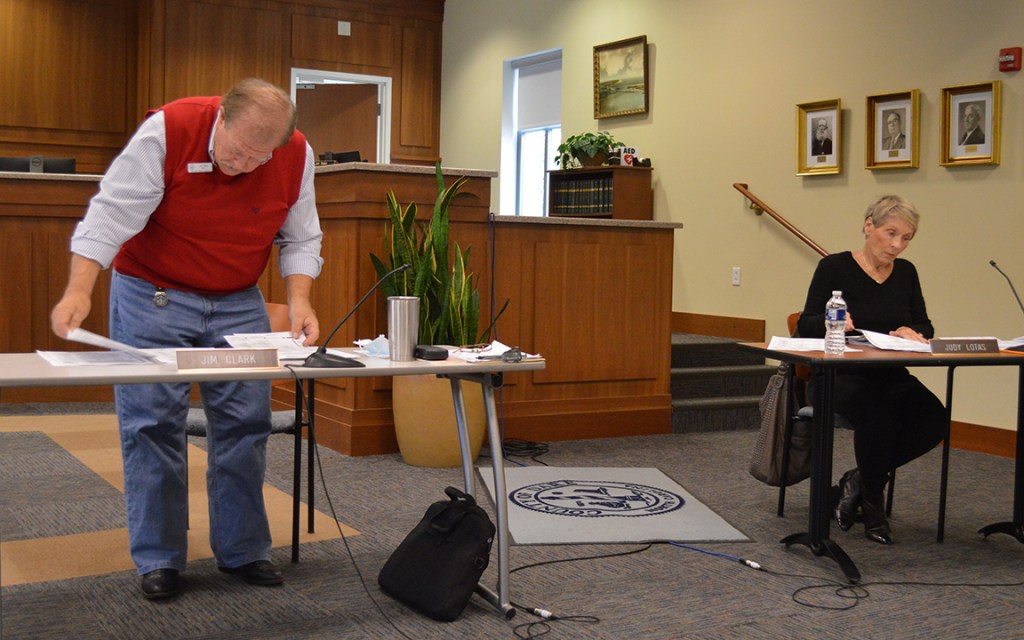 Two members of the Dare County Board of Elections begin to count ballots cast in the presidential election in two Dare precincts. Board members Republican Jim Clark and Democrat Judy Lotas separated a portion of the ballots into piles by candidates and counted the ballots. The ballot count confirmed voting machine accuracy. Mary Helen Goodloe-Murphy photo

The Dare County Board of Elections gathered Thursday morning, November 5 to conduct a state-requested hand-eye count of votes cast for president in two Election Day precincts.

The purpose of the hand-eye count was to check the accuracy of voting machines.

Seats for the five-member election board were arranged in a socially-distanced manner in the Dare County Board of Commissioners meeting room. Seats were assigned in a bipartisan layout with Chair Sandy Semans Ross in the middle.

On one side was Republican Jim Clark and Democrat Judy Lotas. On other side was board Secretary James Cofield and substituting for board member Ken Bukantas, Republican, was Kelly McPherson, an elections staffer who is a registered Republican. McPherson was appointed to the task by Ross.

Jackie Tillett, elections director, unlocked the Chicamacomico precinct ballot box, which had been locked since election day. She distributed a stack of ballots to each of the four counters, who sorted the ballots by candidate. Each person counted candidate ballots and tabulated the results. Then the piles of ballots were switched so another person in the opposite political party counted the same stack of ballots.

Ross collected the four totals by candidate, added up the totals and declared the hand count of Chicamacomico precinct matched the voting machine total for the presidential race.

The identical process was completed for Southern Shores.

During the counting, Ross said election day went exceptionally well. The most consistent complaint from voters was not receiving an “I Voted” sticker.

Ross said stickers were not provided due to COVID-19. Pens were supposed to be available. Dare’s order did not arrive. So, before early voting started, Dare County Board of Elections ordered pens from Staples, which were distributed at the three early voting sites. The state later sent pens without “I Voted” printed on the pen.

Ross praised Dare’s political organizations. “The parties were great to work with,” said Ross. If there was an electioneering problem, “all we had to do was call the parties” and the problem was taken care of.

“We really, really appreciate all the cooperation,” said Ross.

Praise also came for Manteo Postmaster Donna Davis, who delivered ballots as they arrived and ferried ballots for Dare from Plymouth.

Ross also reported on an effort to secure a ballot from a completely immobile woman who was cared for in one of Dare County’s congregant facilities. Ross said a person “should not have to give up the right to vote because they are being cared for.” It’s something she wants to work on for the next two years.

Under North Carolina voting rules, mail-in ballots with a Nov. 3 postmark can be received as late as 5 p.m. on Nov. 12. In the presidential race, vote by mail absentee ballots in Dare as of Nov. 2 totaled 3,781.