Every year on the last Sunday in October, the Marine Corps Marathon – “The People’s Marathon” – is run on a course through downtown Washington, D.C. There are more than 40,000 runners and the crowd along the 26.2 mile course is estimated in the hundreds of thousands. This event is organized and managed by active duty Marines, most of them based in the Washington area.

For the first time ever, the event was canceled because of the pandemic. Instead, the Marines allowed runners to run this race “virtually” in their home towns, then report their results and receive their Finisher medals.

On Sunday, October 25, a small group of local runners ran their virtual Marine Corps Marathon starting at the Wright Brothers Memorial, winding through Kill Devil Hills, Kitty Hawk, Southern Shores and back to the First Flight Airstrip at the park. Their race began at 6 a.m. and they crossed the finish line at 10:40 a.m. – very respectable time of four hours and forty minutes.

At the real race in Washington D.C., runners are supported throughout the course and greeted at the finish by hundreds of uniformed Marines and thousands of friends and family. The USCG Auxiliary assisted in recreating that atmosphere. Auxiliarists Tom Mattingly and Jack Horst, along with their friend Ed Conjura, supported the runners on their bikes throughout the course.

As the runners crossed the finish line in Kill Devil Hills, they were met by their friends and family and surprised by a uniformed contingent from the USCG Auxiliary Outer Banks Flotilla including Sammy the Sea Otter. But the real surprise for the runners was the presentation of their Finisher medals by Master Sergeant Robert Yanacek (USMC Retired). The runners were honored to be acknowledged by Master Sergeant Yanacek, who is the Adjutant for the Outer Banks Marine Corps League detachment. 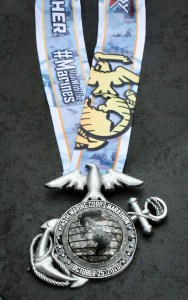 The 45th Marine Corps Marathon Finisher medal. At the bottom of the globe, the sand from Iwo Jima is visible. Marcia Horst photo

This year would have been the 45th Marine Corps Marathon. More importantly, it is the 75th anniversary of the World War II Battle for Iwo Jima; the most famous and bloody Pacific battle fought by the Marines. Inside each of the Finisher medals presented to the runners are grains of sand from Iwo Jima to honor the memories of those that fought on the island. To make a great day even better, despite the pouring rain, those in attendance donated almost $500 to the Beach Food Pantry.

The Coast Guard Auxiliary is the uniformed civilian component of the U.S. Coast Guard and supports the Coast Guard in nearly all mission areas. The Auxiliary was created by Congress in 1939. For more information about a boating course near you or to learn more about water safety or becoming one of America’s Volunteer Lifesavers, visit www.cgaux.org.