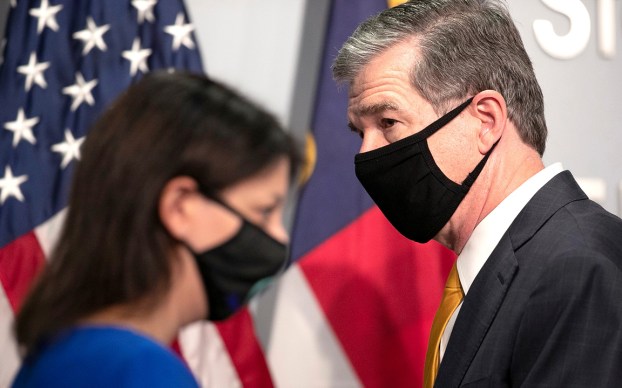 The newly reelected Democrat said he does not want the state to go “backward” by shutting down businesses or schools. Instead, he’s holding out hope that increased compliance with existing health guidelines will stabilize the worsening trends.

“Our numbers are going up, but things are not on fire yet,” Cooper said in a news conference.

The governor pleaded with North Carolinians to adjust their Thanksgiving plans to avoid traveling, warning residents “are in danger.” His top public health official, Dr. Mandy Cohen, said the state is “on very shaky ground.”

Cooper unveiled a new alert system last week that assigns one of three colors to counties based on key coronavirus metrics. Cooper said Monday that 20 counties have fallen into the red “critical” spread category, up from 10 in the previous week. An additional 42 counties are labeled orange because they have “substantial community spread.” The remaining areas are yellow with “significant” spread.

People exercising indoors must wear a mask if they are not within their own home. If they are outside and within 6 feet (1.8 meters) of someone who does not live in their household, they also need to be masked. College and professional athletes not actively competing or recovering from exercise must be masked.

The order requires all restaurant workers to wear a mask, even if they don’t interact with the public. Customers must also be masked, including at their table, when they are not actively eating or drinking.

Local police departments can fine businesses that fail to enforce the mask mandate, which was first issued in June. Greensboro Mayor Nancy Vaughan said at the news conference that businesses in her city can also be fined $100 for each person over the permitted capacity.

The new order makes it clear that individuals can be fined for not wearing a mask and charged with trespassing if they remain unmasked and refuse to leave a business premises.

Cooper said he wanted to give businesses and residents yet another chance to follow safety guidelines before he feels prompted to shutter parts of the economy.

“We want to give this a little more time to see if we can stem the tide of these numbers,” Cooper said. “I have a belief that the people of North Carolina can pull together and do this — and understand if we don’t, we will have to go backward. Right now, we think this is the right move. It’s a call to arms.”

His order goes into effect at 5 p.m. Wednesday and expires at the same time Dec. 11.

North Carolina on Monday reported a single-day increase of more than 2,400 coronavirus cases, up from fewer than 2,000 at the same time last week. The state on Sunday saw its highest daily rise in cases since the pandemic began, with more than 4,500 new cases. Also on Sunday, more than 1,600 people were hospitalized with COVID-19, which is the highest number to date.