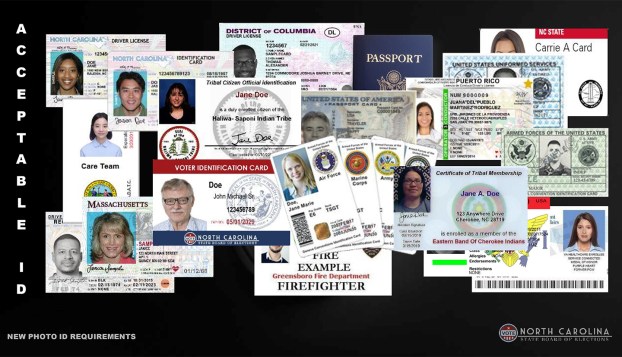 A federal judge wrongly blocked North Carolina’s latest photo voter identification law, an appeals court ruled Wednesday, deciding she erred when declaring the requirement was tainted by racial bias because a previous voter ID law had been struck down on similar grounds.

The unanimous opinion by a 4th U.S. Circuit Court of Appeals panel reversing a December 2019 preliminary injunction by District Judge Loretta Biggs doesn’t mean the voter ID requirement can now be carried out. But the decision improves the position of Republican lawmakers, who for years have sought IDs for voting, to require it for the 2022 elections. Biggs’ ruling had essentially blocked the ID requirement for the 2020 elections.

The mandate “must be implemented for the next election cycle in our state,” Republican House Speaker Tim Moore said in a release.

The 4th Circuit ruling puts aside arguments by civil rights groups that sued over the law. They contended, in part, that the current voter ID rules can’t be carried out because previous courts declared Republicans approved a 2013 voter ID law with intentional racial discrimination in mind.

“The outcome hinges on the answer to a simple question: How much does the past matter?” Circuit Judge Julius Richardson wrote in the opinion, citing a U.S. Supreme Court decision. “A legislature’s past acts do not condemn the acts of a later legislature, which we must presume acts in good faith.”

Richardson wrote Biggs’ injunction must be overturned “because of the fundamental legal errors that permeate the opinion” and “irrevocably affected its outcome.”

Spokespersons for the state NAACP and several local NAACP chapters that sued in federal court didn’t respond immediately on Wednesday when emailed seeking comment on the ruling.

Trials are still expected before Biggs and in state court in 2021 in separate lawsuits challenging the law implementing a 2018 amendment to the state constitution that required the use of photo ID to vote in North Carolina elections. And a state appeals court ruling that blocked the ID requirement from being imposed remains in place.

Biggs decided in her injunction that the 2018 voter ID law was approved with the same racial bias that a previous 4th Circuit panel declared in 2016 had infected a 2013 voter ID mandate the GOP-controlled General Assembly also had approved.

Biggs wrote last Dec. 31 that many of the same GOP leaders and legislators who passed the 2018 law were in the legislature five years earlier, when they had received data that broke down voter behavior by race. She suggested that racial data was still in the minds of many legislators in 2018. Biggs, an Obama appointee, pointed to the state’s “sordid history of racial discrimination and voter suppression” continuing to present times.

But Richardson wrote much had changed since 2013. A majority of voters had approved a constitutional amendment requiring photo ID in November 2018. Legislators weeks later approved supplemental laws to carry it out.

“The people of North Carolina had interjected their voice into the process,” Richardson wrote. Judges Pamela Harris and Marvin Quattlebaum joined in the opinion.

The supplemental laws also expanded the types of qualifying IDs and made it easier for registered voters without IDs to have their votes counted. Richardson pointed out the legislation received votes from a handful of Democrats following several days of debate and approved changes sought by bill opponent.

“The 2018 Voter ID Law is more protective of the right to vote than other states’ voter ID laws that courts have approved,” Richardson wrote.

The three-judge panel does not doubt that “there is a long and shameful history of race-based voter suppression in North Carolina,” wrote Richardson, but Biggs “considered the North Carolina General Assembly’s past conduct to bear so heavily on its later acts that it was virtually impossible for it to pass a voter ID law that meets constitutional muster.”

More than 30 states require some form of voter ID. Supporters of the photo ID mandate say it builds confidence in election results. But data shows voter impersonation is rare. Voter ID opponents, which include Democratic Gov. Roy Cooper, have said the mandate puts needless obstacles in the way of people otherwise legally qualified to vote.

Like illuminated gems setting the night ablaze with lights, The Elizabethan Gardens’ WinterLights has added holiday sparkle to one of... read more