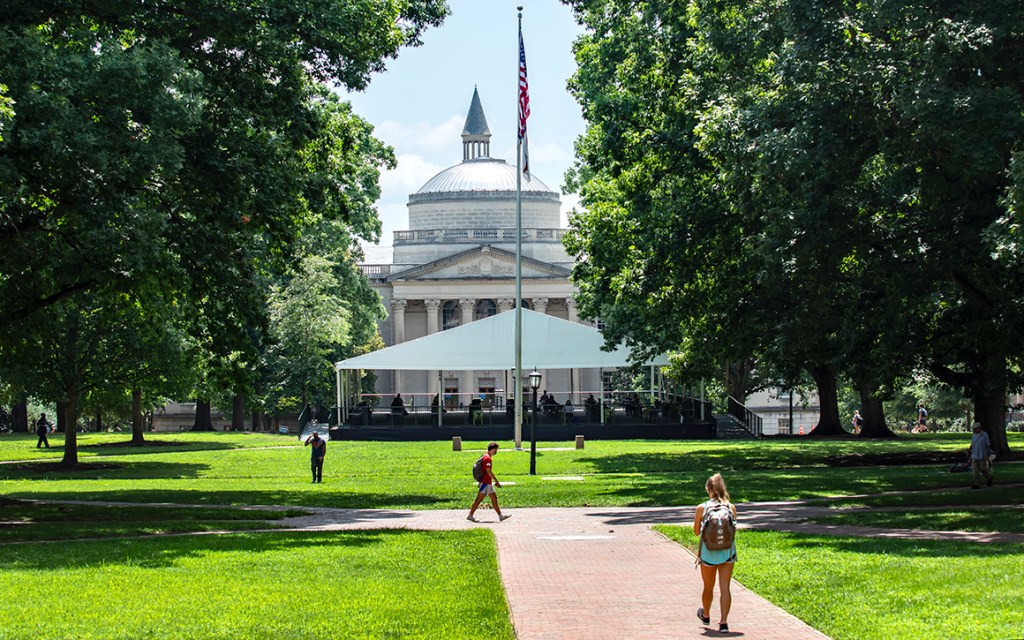 Campus scenes from August 11, 2020, on the campus of the University of North Carolina at Chapel Hill. Johnny Andrews/UNC-Chapel Hill photo

The University of North Carolina at Chapel Hill announced Friday that it has suspended three fraternities that have been linked to a drug trafficking ring that federal prosecutors say funneled large amounts of drugs into three college campuses.

The U.S. Attorney’s Office in Greensboro announced on Thursday that 21 people were charged in connection to the ring following an investigation by the U.S. Drug Enforcement Administration and the Orange County Sheriff’s Office.

“Today, UNC-Chapel Hill suspended University recognition of the campus chapters of Phi Gamma Delta, Kappa Sigma and Beta Theta Pi due to the alleged activity cited in the ongoing investigation,” Guskiewicz wrote. “We are taking swift action today because the serious nature of the alleged criminal behaviors is contradictory to our code of conduct and endangers the health of our student body and community.”

Guskiewicz said the university is continuing to work with law enforcement.

According to court filings, the illegal drug activity at the three fraternities occurred between 2017 and the spring of 2020.

When announcing the federal charges on Thursday, U.S. Attorney Matthew G.T. Martin said more than 1,000 pounds (450 kilograms) of marijuana was funneled, along with several hundred kilograms of cocaine, and significant quantities of other drugs.

Prosecutors say the drugs were distributed to UNC-Chapel Hill, Duke University and Appalachian State University. The drug ring made at least $1.5 million during the years-long stretch, investigators said.

The suspects range in age from 21 to 35, with the majority being in their mid-twenties. It’s unclear how many are or were students at any of those three schools, but Guskiewicz said none of the suspects are currently enrolled at UNC-Chapel Hill.

“No one is above the law, including college students and fraternity members at elite universities,” Martin said in a statement on Thursday. “This serious drug trafficking is destructive and reckless, and many lives have been ruined. … University administrators and national chapters cannot turn a blind eye to the impact on these students and the environment on their respective college campuses.”